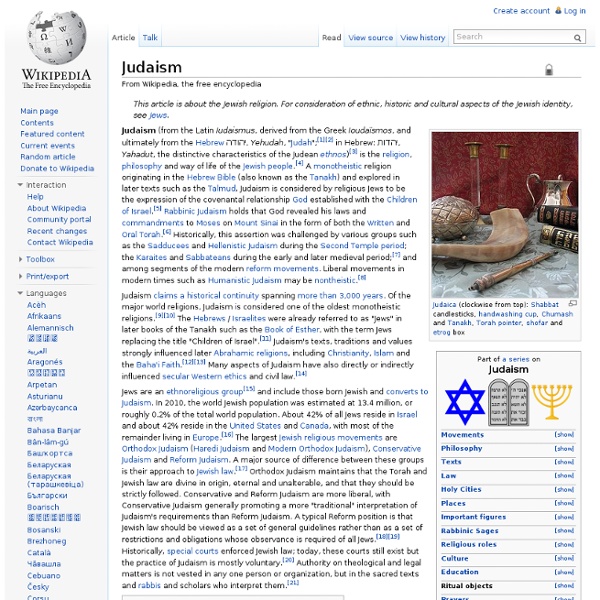 Judaism (from the Latin Iudaismus, derived from the Greek Ἰουδαϊσμός, and ultimately from the Hebrew יהודה, Yehudah, "Judah";[1][2] in Hebrew: יהדות, Yahadut, the distinctive characteristics of the Judean ethnos)[3] is the religion, philosophy and way of life of the Jewish people.[4] Judaism is a monotheistic religion, with the Torah as its foundational text (part of the larger text known as the Tanakh or Hebrew Bible), and supplemental oral tradition represented by later texts such as the Mishnah and the Talmud. Judaism is considered by religious Jews to be the expression of the covenantal relationship God established with the Children of Israel.[5] Judaism includes a wide corpus of texts, practices, theological positions, and forms of organization. Judaism claims a historical continuity spanning more than 3,000 years. Defining character and principles of faith Defining character Glass platter inscribed with the Hebrew word zokhreinu - remember us Core tenets 13 Principles of Faith:

Related:  Judaism • The problems with philosophy

Theology: Judaism. History, Beliefs of Jewish Religion / Jews Who is the bravest hero? He who turns his enemy into a friend. Judge not thy neighbor until thou art come into his place. Union hymnal : Central Conference of American Rabbis Skip to main content Search the history of over 439 billion pages on the Internet. Featured All Texts This Just In Smithsonian Libraries FEDLINK (US) Genealogy Lincoln Collection Additional Collections eBooks & Texts Hasidic Judaism - Ultra-Orthodox Jews - Hasidism By Lisa Katz Hasidic Judaism is one movement within Haredi Judaism. Hasidic Jews are called Hasidim in Hebrew.

Judaism is not Zionism We would like to take a few minutes of your time to prevent you from making a terrible mistake that may have disastrous results for many. You have always without a doubt heard and read much about the political crises in the Middle East in which the State of Israel plays a central role. This is, in fact, an ongoing series of crises with potential to bring the greatest misfortune on the entire world. Tragically many believe that Zionism and Judaism are identical. Thus they conclude that the entire Jewish people is responsible for the actions of the Zionist government and the world crises which emanates from it. This is a Grave Error!

Hebrew Bible The Hebrew Bible, also known as Mikra (“what is read”) or TaNaKh, an acronym referring to the traditional Jewish division of the Bible into Torah (Teaching), Nevi’im (Prophets), and Ketuvim (Writings), is the founding document of the people of Israel, describing its origins, history, and visions of a just society. The word Bible, from the Greek, ta biblia, is plural and means “books.” This reflects the fact that the Bible is actually a collection of individual books (such as Genesis, Exodus, Isaiah, Song of Songs, and many others). Similarly, another traditional name for the Torah, Humash (“of Five”), indicates that the Torah itself is a book composed of five books. Perhaps our conception of the Bible as one book is a result of our having one-volume printed Bibles; in ancient times, individual books were published in smaller scrolls; the word Bible, however, comes from the Greek ta biblia, which is plural and means books.

The Talmud and the New World Order The New World Order and the Talmud. What does the Talmud have to do with it? It's the hidden cornerstone of the NWO agenda. I never realized it either until recently. I mean we've had spin doctors and disinfo agents over the past hundred years making sure we believed all the evils were beget through Catholicism. In fact, I think I just finally put the last piece to this NWO puzzle together. Are you Torah Jews or Talmudic Jews? Please help me. As a Christian, I support Israel, and I do defend the Jews. My grandfather was a freemason for decades, a boyscout master for 12 years. My grandmother collects owls and they named their dog after Golda Mier. So I started telling people "See!

What is the Talmud? The Talmud is a huge collection of doctrines and laws compiled and written before the 8th Century, A.D., by ancient Jewish teachers. The Talmud, which often cites the Old Testament, is the basic book of Jewish law. Babylonian and Palestinian Talmuds There are two editions of the Talmud; one was composed by Babylonian Jews and one by Jews who lived in ancient Jerusalem. Masoretic Text The Torah texts that we read today are believed by some to be the same as those given to Moses and the people of Israel by God. It is believed by scholars that the word of God and history of the Jewish people was imprinted on the minds of the Israelites at Mount Sinai. Over the years as tradition was orally passed on and eventually written down, many disparities of the Torah emerged as countless scribes wrote numerous scrolls.