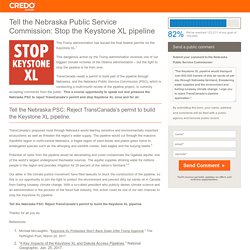 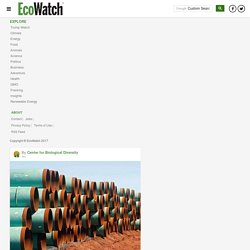 Michael Mann, John Christy, Judith Curry and Roger Pielke Jr. was a quite a circus. Which is exactly why someone who's been through Smith's nonsense, Dr. David Titley, wrote for the Washington Post that scientists should boycott these biased hearings. That would be nice, if that meant that Smith would stop holding them. But since he shows no sign of slowing his inquisition, someone needs to show up to set the record straight and push back on all the denial packed into the hearing like so many clowns in a tiny car. And that's exactly what Dr. In response, Lamar Smith, the esteemed media critic who cited the Daily Mail's bogus Bates story, who has written for Breitbart and said that people should get their news directly from Trump, claimed that Science Magazine is "not known as an objective magazine. 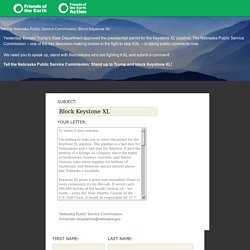 Yesterday, Donald Trump's State Department approved the presidential permit for the Keystone XL pipeline. The Nebraska Public Service Commission -- one of the key descision-making bodies in the fight to stop KXL -- is taking public comments now.We need you to speak up, stand with Nebraskans who are fighting KXL and submit a comment! Tell the Nebraska Public Service Commission: Stand up to Trump and block Keystone XL! To whom it may concern: I’m writing to urge you to reject the permit for the Keystone XL pipeline. This pipeline is a bad deal for Nebraskans and a bad deal for America. Treaty and additional information. Cash investigation du 24-05-2016 à 20:55 - Climat : le grand bluff des multinationales en replay. 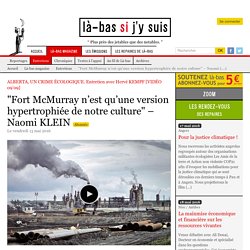 (et c’est très simple) Keystone leaks and reminds us why we’re glad there isn’t an XL pipeline out there. A major section of the original Keystone pipeline is out of commission after an oil spill near the pipeline was detected in South Dakota on April 2. 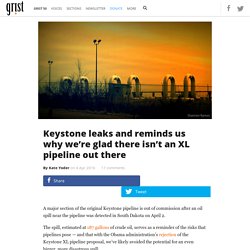 The spill, estimated at 187 gallons of crude oil, serves as a reminder of the risks that pipelines pose — and that with the Obama administration’s rejection of the Keystone XL pipeline proposal, we’ve likely avoided the potential for an even bigger, more disastrous spill. Beneath the tar sands is even dirtier oil, and industry is salivating over it. The price of crude oil has slumped to its lowest point in six years, and that has sent some major oil companies scrambling to get out of expensive tar-sands projects in Alberta, Canada. 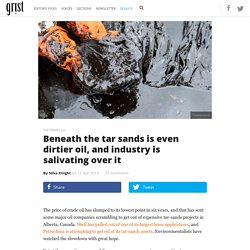 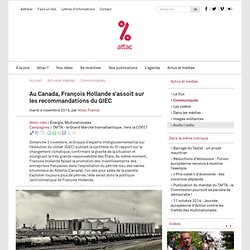 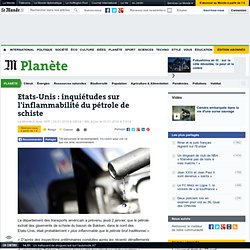 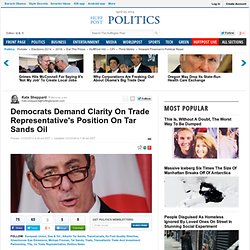 The EU has a policy known as the Fuel Quality Directive, which calls for a 6 percent reduction in emissions from transportation fuels like gasoline and diesel by 2020. As part of that, the EU wants to assign values to different types of fuel based on the emissions they generate. Tar sands oil, which has much higher emissions than conventional crude, would be assigned a higher value under the system. A letter from 21 Senators and House members cites "troubling" reports that the U.S. might be working to undermine those rules as part of the negations over the Transatlantic Trade and Investment Partnership (TTIP). 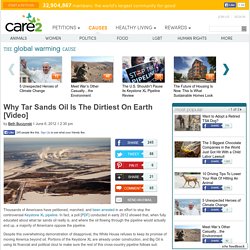 In fact, a poll [PDF] conducted in early 2012 showed that, when fully educated about what tar sands oil really is, and where the oil flowing through the pipeline would actually end up, a majority of Americans oppose the pipeline. Despite this overwhelming demonstration of disapproval, the White House refuses to keep its promise of moving America beyond oil. Portions of the Keystone XL are already under construction, and Big Oil is using its financial and political clout to make sure the rest of this cross-country pipeline follows suit.

Many people make judgement about energy based on the things that affect them most: the price of gas or their personal utility bill. Oil Sands Fever and Lack of Environmental Review. The Harper Conservatives are well known for being defenders of the oil sands (no matter what effect they have on the climate), going so far as to modify the environmental assessment process in the latest budget so the project can go ahead more quickly. The Tories became vicious when Opposition Leader Tom Mulcair suggested the Alberta oil sands were artificially inflating the Canadian dollar and that was hurting other industries across the country, particularly manufacturing in Ontario. The Tories demanded that Mulcair visit the oil sands before having any such opinion on them, and suggested that he could not have an open mind when he scheduled his visit. Deformed Fish Found Downstream of Tar Sands Mines.

Written by Jason Mark Chief Allan Adam, the head of the Fort Chipewyan community in the far north of Alberta, has been fishing in Lake Athabasca for all of his life. His father, now 76 years old, has been fishing there even longer. And neither of them has seen anything like what they pulled from the lake on May 30: two grotesquely deformed, lesion-covered fish. When they caught the sickly fish, each taken from a different part of the lake, the two Indigenous men immediately figured that it had something to do with the massive tar sands oil mines that lie about 300 kilometers upstream along the Athabasca River. “We have been putting two and two together, and raising concerns about the fast pace of [tar sands] development,” Chief Adam told me in a phone interview this week. The deformed fish caught two weeks ago included a northern pike that had lesions along its back and belly and a sucker that was missing many of its scales.

This post was originally published by the Earth Island Journal. ExxonMobil’s tar-sands pipeline leaks again. ExxonMobil’s 1940s-era Pegasus pipeline has been shut down since it ruptured more than a month ago in the Arkansas town of Mayflower, spilling tar-sands oil and making a big mess. But the company is legendary when it comes to spilling oil, and it wasn’t going to let a little pipeline shutdown hold back its oil-spilling ways. Paris ne veut plus pénaliser les sables bitumineux. February 21, 2012 - Only a Couple Days to Support European Union Labeling of Tar Sands as Highly Polluting.

Pipeline spills oil waste over more than 100 acres of Alberta. A major spill of toxic oil waste has wiped out trees and vegetation across a 104-acre swath of Alberta, Canada. The apparent cause of the spill: The rupture of a five-year-old pipeline that was designed to last at least 30 years. The pipeline spilled 2.5 million gallons of a waste mixture of oil and water, which the company responsible, Houston-based Apache Corp., downplayed as “salty water” with “trace amounts of oil.” Whatever you call it, it’s nasty stuff. “Every plant and tree died” in the area touched by the spill, says the chief of the nearby Dene Tha First Nation, while The Globe and Mail reports that “aerial photos show a broad strip of trees that have turned brown.” It’s unclear when the pipeline started spilling.