Fault Lines - The School to Prison Pipeline. The school-to-prison pipeline, explained. Minor Infractions. When High School Students Are Treated Like Prisoners. As students in New York City return to school for the fall, a coalition of youth and legal advocacy groups, including the New York Civil Liberties Union, has launched a campaign to address disciplinary policies that they argue criminalize students, making them less likely to graduate and more likely to end up ensnared in the criminal justice system. 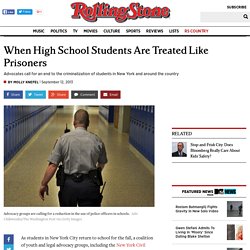 The "New Vision for School Safety" presented by the campaign calls for a citywide reduction of the use of police and NYPD school safety officers in schools and an increase in the power of educators, parents and students to shape the safety policies in their school communities. Advocates argue that strict disciplinary practices, including police presence, metal detectors and "zero tolerance" policies, disproportionately target students of color, especially black and Latino youth. "These arrests are resulting from the same Stop and Frisk approach we see in the streets," says Steven Banks, Attorney in Chief of the Legal Aid Society. Unraveling Zero Tolerance. Who's profiting off the school-to-prison pipeline? Sign Up for Our free email newsletters For years, civil rights advocates and educators have struggled to reverse a troubling trend in the nation's educational system: As schools become increasingly punitive, students — particularly students of color, students with special needs, and students from low-income or foster households — are being pushed out of the classroom and into the criminal justice system. 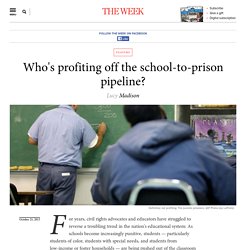 An increasingly large number of kids are getting suspended, expelled, and even detained long term for infractions as seemingly minor as bringing nail clippers or scissors to school. Others are getting arrested or detained merely for disruptive behavior. In 2011, about 31 percent of the nation's 61,423 juvenile delinquents were committed to private detention facilities, according to census data from that year. And the juvenile justice system doesn't exactly encourage high achievement among at-risk kids. The policies have not made schools safer. Here's the Huffington Post's Chris Kirkham: The school-to-prison pipeline: By the numbers. Doug Hood/AP June 5, 2014 Update: The presence of police officers in schools has increased dramatically in the last 20 years, and as a result, so has the number of students receiving misdemeanor and felony charges. 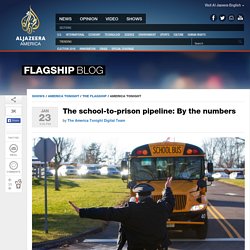 African-American and Latino youth appear to bear the brunt of zero-tolerance policies and out-of-school suspensions. Fault Lines correspondent Wab Kinew traveled to Texas, where being late for class can get you sent to jail, to examine the difficulties of disrupting what the U.S. government now refers to as the school-to-prison pipeline.

In January, as part of Getting Schooled, an America Tonight special series on some of the biggest issues in U.S. education, we looked at where and how the school-to-prison pipeline is playing out throughout the country. Stuck In The School-To-Prison Pipeline. School to Prison Pipeline. What is the School-to-Prison Pipeline? The "school-to-prison pipeline" refers to the policies and practices that push our nation's schoolchildren, especially our most at-risk children, out of classrooms and into the juvenile and criminal justice systems. 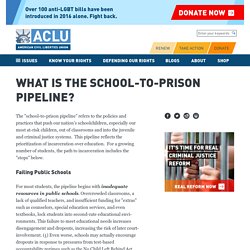 This pipeline reflects the prioritization of incarceration over education. For a growing number of students, the path to incarceration includes the "stops" below. Failing Public Schools For most students, the pipeline begins with inadequate resources in public schools. Overcrowded classrooms, a lack of quali­fied teachers, and insufficient funding for "extras" such as counselors, special edu­cation services, and even textbooks, lock students into second-rate educational envi­ronments. Zero-Tolerance and Other School Discipline Overly harsh disciplinary policies push students down the pipeline and into the juvenile justice system.