USA Presidential Elections 2020 - Politics and society. Instructions for both groups, president and secretary. AP FACT CHECK: Is Trump's America great again or hellscape? WASHINGTON (AP) — The Republican National Convention begged this question: Why are President Donald Trump’s most fervent supporters describing the state of his union as a hellscape? 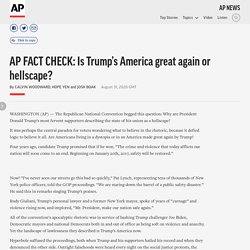 It was perhaps the central paradox for voters wondering what to believe in the rhetoric, because it defied logic to believe it all. Are Americans living in a dystopia or in an America made great again by Trump? Four years ago, candidate Trump promised that if he won, “The crime and violence that today afflicts our nation will soon come to an end. Beginning on January 20th, 2017, safety will be restored.” Now? Rudy Giuliani, Trump’s personal lawyer and a former New York mayor, spoke of years of “carnage” and violence rising now, and implored, “Mr. All of the convention’s apocalyptic rhetoric was in service of bashing Trump challenger Joe Biden, Democratic mayors and national Democrats both in and out of office as being soft on violence and anarchy. A selection from the week: THE FACTS: Not accurate. REP. Dr. The US is the world's top soft power, but Trump has damaged its reputation.

The U.S. is seen as a global force in terms of its “soft power” and influence, despite controversy around President Trump’s administration, which has damaged the country’s reputation, according to new research. 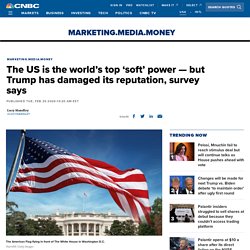 The Global Soft Power Index, by consultancy Brand Finance, surveyed more than 50,000 consumers in 87 countries to rank countries in terms of their familiarity, reputation and influence, among other measures. The U.S. came in top, with Germany, the U.K., Japan and China following. France, Canada, Switzerland, Sweden and Russia make up the rest of the top 10. The term “soft power” was coined by political scientist Joseph Nye in the late 1980s and relates to a nation’s ability to attract or persuade other nations, rather than coerce using military or economic means. How the world sees the U.S. and Trump in 2018 in 9 charts. Note: See this post for more recent charts on views of the U.S. and Trump. 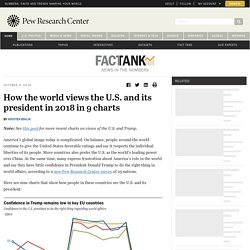 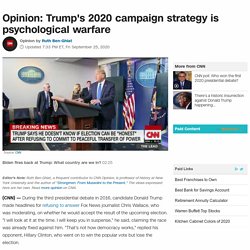 President Trump, once more, baselessly claims the entire electoral system is "rigged" to favor his adversary, now Joe Biden, and won't commit to abiding by the outcome. It's still not how democracy works. But now we know better. Trump has little interest in or respect for the democratic process. Since he appeared on the political scene, Trump has been open about his disdain for democracy. The manipulation of information has always been key to the success of authoritarians. From the eternal mystery of his tax returns (which we still don't have) to records of which businesses are receiving pandemic stimulus loans (which Treasury Secretary Steven Mnuchin called "proprietary information" before the Small Business Administration released the data in July), to what Trump says when he meets with Russian president Vladimir Putin, his administration stands out for all that it tries to avoid telling the public. 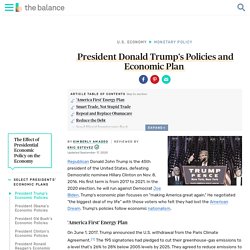 His first term is from 2017 to 2021. In the 2020 election, he will run against Democrat Joe Biden. Trump's economic plan focuses on "making America great again. " He negotiated "the biggest deal of my life" with those voters who felt they had lost the American Dream. Foreign Policy and American Leadership Plan. Read Joe Biden’s essay on Why America Must Lead Again Joe Biden laid out his foreign policy vision for America to restore dignified leadership at home and respected leadership on the world stage. 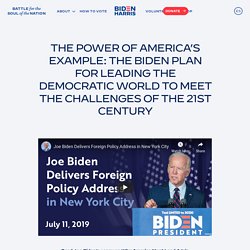 Arguing that our policies at home and abroad are deeply connected, Joe Biden announced that, as president, he will advance the security, prosperity, and values of the United States by taking immediate steps to renew our own democracy and alliances, protect our economic future, and once more place America at the head of the table, leading the world to address the most urgent global challenges. In a Biden administration, America will lead by example and rally the world to meet our common challenges that no one nation can face on its own, from climate change to nuclear proliferation, from great power aggression to transnational terrorism, from cyberwarfare to mass migration.

Here's how Joe Biden plans to change Social Security if elected president. The coronavirus pandemic could have a big impact on Social Security’s financial prospects. 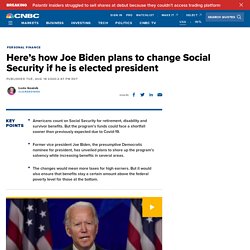 And that means the future of the program could be a bigger issue in the 2020 presidential election. This year alone, about 65 million Americans will receive more than $1 trillion in benefits through Social Security retirement, disability and survivor benefits. But the funds used to pay those benefits will likely become depleted sooner than previously anticipated due to the effects Covid-19 has had on the U.S. economy. Just how quickly those funds could run out is still to be determined. In April, the Social Security Administration said the funds were projected to run out in 2035, at which point 79% of benefits would be payable. More from Personal Finance:What’s ahead for your taxes if Biden wins the election7 states approved to offer extra $300 weekly unemployment benefitsHow to get a college tuition refund if things go south this semester.

Joe Biden: Where does Joe Biden stand on key issues? US election 2020: Who really decides the outcome? - BBC News. Presidential debate: Trump and Biden trade insults in chaotic debate. Media playback is unsupported on your device President Donald Trump and his challenger Joe Biden have fiercely clashed in one of the most chaotic and bitter White House debates in years. 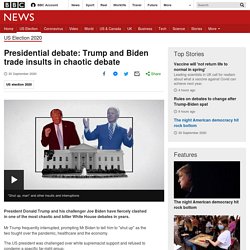 Mr Trump frequently interrupted, prompting Mr Biden to tell him to "shut up" as the two fought over the pandemic, healthcare and the economy. The US president was challenged over white supremacist support and refused to condemn a specific far-right group. Opinion polls suggest Mr Biden has a steady single-digit lead over Mr Trump. But with 35 days until election day, surveys from several important states show a closer contest. Polls also suggest one in 10 Americans have yet to make up their mind how to vote. What were the key moments? Overall, the 90-minute debate in Cleveland, Ohio, was light on serious policy discussion. Presidential debate: Trump and Biden's claims fact-checked. Image copyright AFP President Trump and his Democratic challenger Joe Biden have gone head-to-head in the first of three televised debates before the US election in November. 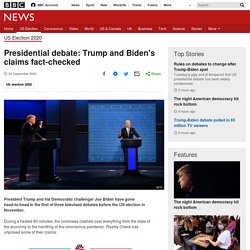 During a heated 90 minutes, the nominees clashed over everything from the state of the economy to the handling of the coronavirus pandemic. Reality Check has unpicked some of their claims. US election 2020 polls: Who is ahead - Trump or Biden? Has Trump made America great? US election 2020: Polling day dawns as voters pick Trump or Biden.