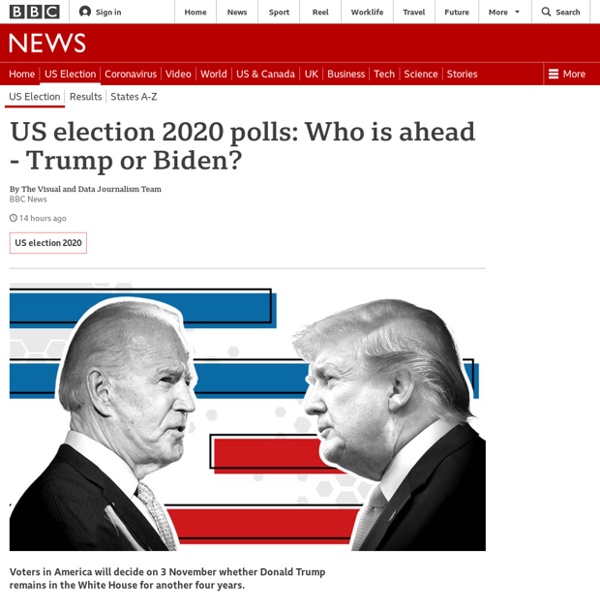 Related:  The 2020 US election • news updates • US Elections

Presidential debate: Trump and Biden trade insults in chaotic debate Media playback is unsupported on your device President Donald Trump and his challenger Joe Biden have fiercely clashed in one of the most chaotic and bitter White House debates in years. Mr Trump frequently interrupted, prompting Mr Biden to tell him to "shut up" as the two fought over the pandemic, healthcare and the economy. The US president was challenged over white supremacist support and refused to condemn a specific far-right group. Boris Johnson: UK must not return to status quo after Covid-19 pandemic Boris Johnson has said the UK must not return to the status quo after the coronavirus pandemic, promising a transformation akin to the “new Jerusalem” the postwar cabinet pledged in 1945. The prime minister also mounted a robust defence of the private sector, saying “free enterprise” must lead the recovery and that that he intended to significantly roll back the extraordinary state intervention the crisis had necessitated. In a markedly upbeat speech, Johnson said the UK was and would be “the greatest place on Earth”, and that it was “the measure of the greatness of this country that we are simply not going to let [the pandemic] hold us back or slow us down”. Speaking at the Conservative party’s virtual conference, the prime minister said the “ructions” caused by the pandemic would lead to a transformation of the UK by 2030, with mass home ownership, electric vehicles, better broadband and blue passports. “After all we have been through, it is not enough just to go back to before.

Here's how Joe Biden plans to change Social Security if elected president The coronavirus pandemic could have a big impact on Social Security’s financial prospects. And that means the future of the program could be a bigger issue in the 2020 presidential election. This year alone, about 65 million Americans will receive more than $1 trillion in benefits through Social Security retirement, disability and survivor benefits. But the funds used to pay those benefits will likely become depleted sooner than previously anticipated due to the effects Covid-19 has had on the U.S. economy.

Trump Refuses To Commit To Accepting Election Results During an interview with Fox News anchor Chris Wallace that aired Sunday, President Trump refused to commit to accepting the results of the 2020 election, slammed mail-in voting and called polls showing him trailing former Vice President Joe Biden “fake” Presented with a Fox News poll showing him trailing Biden by 8 points, Trump told Wallace, “first of all, I'm not losing, because those are fake polls." Wallace asked Trump “can you give a direct answer that you will accept the election?”

Presidential debate: Trump and Biden's claims fact-checked Image copyright AFP President Trump and his Democratic challenger Joe Biden have gone head-to-head in the first of three televised debates before the US election in November. During a heated 90 minutes, the nominees clashed over everything from the state of the economy to the handling of the coronavirus pandemic. Reality Check has unpicked some of their claims. Trump: "We built the greatest economy in history" Verdict: That's not right - there have been times in US history when the economy was stronger. America's flawed democracy: the five key areas where it is failing On 7 November the United States pulled back from the brink of re-electing a president who has repeatedly shown disdain for democratic norms and institutions. Donald Trump has fused his own business interests with the White House, dubbed the media “enemies of the people”, embraced foreign strongmen, sidelined science and politicized the justice department, falsely cast doubt on the electoral process and is currently distinguishing himself as the first sitting president since 1800 to frustrate a peaceful transition of power. But as great escapes go, this one came bone-rattlingly close to collapsing. More people voted for Trump in the 2020 election – some 71 million Americans – than for any other presidential candidate in US history, other than Joe Biden himself. It took gargantuan determination to unseat him, with historically high turnout and black voters leading the way.

Foreign Policy and American Leadership Plan Read Joe Biden’s essay on Why America Must Lead Again Joe Biden laid out his foreign policy vision for America to restore dignified leadership at home and respected leadership on the world stage. Arguing that our policies at home and abroad are deeply connected, Joe Biden announced that, as president, he will advance the security, prosperity, and values of the United States by taking immediate steps to renew our own democracy and alliances, protect our economic future, and once more place America at the head of the table, leading the world to address the most urgent global challenges. In a Biden administration, America will lead by example and rally the world to meet our common challenges that no one nation can face on its own, from climate change to nuclear proliferation, from great power aggression to transnational terrorism, from cyberwarfare to mass migration. Reinvigorate our Own Democracy & Strengthen the Coalition of Democracies that Stand With Us

Trump's 2020 campaign strategy: psychological warfare (Opinion) Four years later, here we are again. President Trump, once more, baselessly claims the entire electoral system is "rigged" to favor his adversary, now Joe Biden, and won't commit to abiding by the outcome. It's still not how democracy works. But now we know better. Trump has little interest in or respect for the democratic process. Diana Rigg, Avengers and Game of Thrones star, dies aged 82 The actor Diana Rigg, known for her roles on stage and in film and television – including The Avengers and On Her Majesty’s Secret Service – has died at the age of 82. Rigg, who rose to prominence in the 1960s through her starring role as Emma Peel in The Avengers alongside Patrick Macnee, enjoyed a long and varied career, playing Lady Olenna Tyrell in HBO’s smash hit Game of Thrones, a show she admitted in 2019 that she had never watched. She also played Countess Teresa di Vicenzo, or Tracy Bond, James Bond’s first and only wife to date, in the 1969 film On Her Majesty’s Secret Service. Confirming her death, her agent said that Rigg had died “peacefully” on Thursday morning, adding that she had been “at home with her family who have asked for privacy at this difficult time”. The pair appeared together in the Doctor Who episode The Crimson Horror in 2013.