Sweet potato and sausage soup. Because I am, in all likelihood, about seven years old on the inside but old enough on the outside to know that this might never change, I’m just going to admit from the start that the concept of sausage soup makes me giggle. 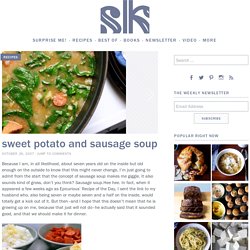 It also sounds kind of gross, don’t you think? Sausage soup.Hee hee. In fact, when it appeared a few weeks ago as Epicurious’ Recipe of the Day, I sent the link to my husband who, also being seven or maybe seven and a half on the inside, would totally get a kick out of it. But then–and I hope that this doesn’t mean that he is growing up on me, because that just will not do–he actually said that it sounded good, and that we should make it for dinner. Well his taste buds–which cry for only tomatoes, salt, cured meats and chocolate–haven’t led us astray in the past, have they? And now, back to hiding under two comforters and hoping the nice landlords will turn on our heat. One year ago: Creamy Macaroni and Cheese, Bretzel Rolls Makes 8 servings Related. Baked potatoes with wild mushroom ragù. Prior to last week, I only liked baked potatoes two ways and the first was so weird, I usually had the decency to keep it to myself. 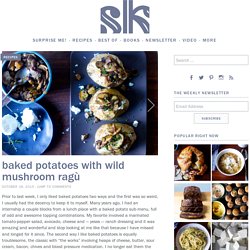 Many years ago, I had an internship a couple blocks from a lunch place with a baked potato sub-menu, full of odd and awesome topping combinations. My favorite involved a marinated tomato-pepper salad, avocado, cheese and — yesss — ranch dressing and it was amazing and wonderful and stop looking at me like that because I have missed and longed for it since. The second way I like baked potatoes is equally troublesome, the classic with “the works” involving heaps of cheese, butter, sour cream, bacon, chives and blood pressure medication. I no longer eat them the first way because the sandwich shop is 250 miles from here and also it has since closed; I usually resist eating them the second way because if I’m going to have all of the fat and calories of a golden, glistening and salted pile of French fries, I’d rather have them in said French fry format.

White bean soup with crispy kale. To make this vegetarian, skip the pancetta and sauté the onion in 2 tablespoons of olive oil. 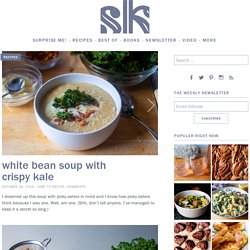 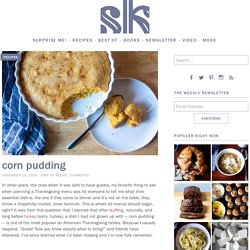 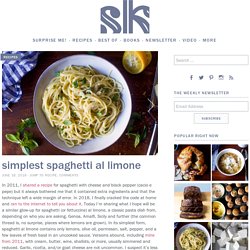 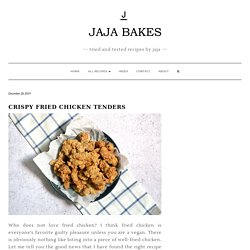 I think fried chicken is everyone’s favorite guilty pleasure unless you are a vegan. There is obviously nothing like biting into a piece of well-fried chicken. Let me tell you the good news that I have found the right recipe for making crispy and juicy fried chicken. Scroll down this Crispy Fried Chicken Tenders to learn how to have them at home. The best part of making this recipe is that you can have this finger-licking delicious chicken all the time. Making fried chicken might seem intimidating, but it is actually pretty straightforward. Let me tell you some requirements for Crispy Fried Chicken Tenders: They have to be crispy on the outside, but juicy inside.The skin should be crusty and have textures.The crispy skin cannot fall off the chicken easily.They should stay crispy after some time.

Secret of Crispy Fried Chicken Tenders Over the time, I have developed my own way of preparing fried chicken. How to Prevent the Batter From Falling Off the Chicken. Almond White Chocolate Matcha Cookies - Jaja Bakes - jajabakes.com. We are back again with another matcha recipe since I have restocked my pantry from my latest trip to Japan. 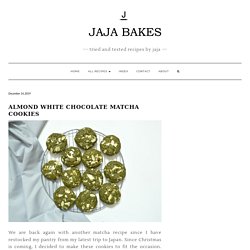 Since Christmas is coming, I decided to make these cookies to fit the occasion. These decadent Almond White Chocolate Matcha Cookies are simply irresistible. I love these cookies so much because they are beyond of my expectation. They are earthy rich with just the right touch of sweetness from the white chocolate chunks. These Almond White Chocolate Matcha Cookies recipe is actually adapted from my previous Almond Chocolate Chunk Cookies. I love how a few tablespoons of matcha powder brings its characteristic bitter earthy flavor to the cookies. Matcha Pancakes - Jaja Bakes - jajabakes.com. These green hue Matcha Pancakes really bring the ordinary pancakes to a new whole level because they are packed with antioxidants and flavor. 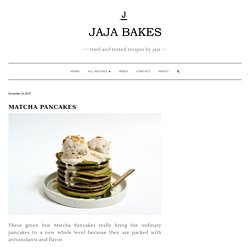 I just restocked my matcha powder in my pantry from my latest trip to Japan. I decided to make some Matcha Pancakes because I still had half of the previous Red Bean Ice Cream. Matcha and red bean combination seem obvious, given how these two ingredients to Japanese people are like the combination of peanut butter and jelly to Americans. A big stack of pancakes is something that never gets old. However, these green hue pancakes really bring ordinary pancakes to a new whole level because they are packed with antioxidants and flavor. I often utilize matcha in baked goods and they turn out delicious. Iced Matcha Latte - Jaja Bakes - jajabakes.com. Make your favorite refreshing Iced Matcha Latte at home with simply three ingredients only. 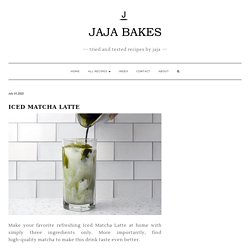 More importantly, find high-quality matcha to make this drink taste even better. Iced Matcha Latte is simply my favorite-to-go drink and I have never turned back. The good news is that drinking matcha is great for your body. Studies have linked matcha to a variety of health benefits. Sipping matcha daily can have a positive impact on your energy levels and overall health. If you are missing your usual Iced Matcha Latte from your neighborhood coffee shop, this recipe is for you. Beef Udon - Jaja Bakes - jajabakes.com. The savory rich broth, the chewy udon noodles, and marinated thin-sliced beef make this Beef Udon my quick ultimate comfort dish to warm my day. 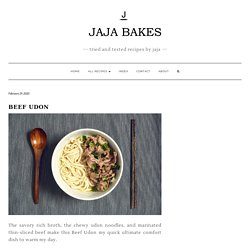 It has been raining cats and dogs here lately. What is more comforting than a bowl of soup in this cold day. Something about wrapping your hands around a warm of delicious comfort says it all. This Beef Udon bowl was something I had in mind at the moment. You can say that my recent trip to Japan influenced me a lot to enjoy more Japanese food. About Udon Udon is a type of thick wheat flour noodle used frequently in Japanese cuisine. Udon comes in many different forms; freshly made, dry, and frozen. Baileys Ice Cream - Jaja Bakes - jajabakes.com. Living outside the United States will not stop me from celebrating Ice Cream Day. Celebrated annually since 1984 on the third Sunday of July in the United States, the unofficially holiday celebrates everyone’s favorite sweet treat.

Ice cream is without a doubt one of my favorite things to eat and make. It is rich and creamy, perfect at any time of the year especially since I live in tropical country where hot weather is always around. Apple Cinnamon Crepes - Jaja Bakes - jajabakes.com. Bored with your everyday pancakes? With a little adjustment, make crepes for your breakfast variation. Crepe is essentially the thinner cousin to pancakes. My favorite part of making crepes is how easy they are to fold. In addition, they are incredible versatile with practically endless sweet and savory filling and topping options. Japanese Chicken Curry - Jaja Bakes - jajabakes.com. I grew up watching anime series during my childhood. I still remember about that one mouthwatering moment wherein my favorite character sits down to devour a delicious meal.

The food portrayed an appealing look that represents the art of Japanese cuisine often leaves me feeling hungry. One of the most commonly dish mentioned in anime is Japanese Curry or known as カレーライス ( karē raisu / curry rice). Many anime shows feature curry in different way, shape, or form. Among those varieties, the most common curry dish in Japan is basically a rice dish served with lots of curry. I actually have been wanting to make this Japanese curry by myself since a long time ago. I was really happy that the curry I made really tasted the same just like the one I tried at restaurants. Creamy Chicken Soup - Jaja Bakes - jajabakes.com. After a hard day, we know that however rough our day was, we automatically start looking for dinner. A simmering pot of soup feeds my appetite and restores my soul after a long day of working. I grew up with my mom making me hearty Creamy Chicken Soup for dinner.

Thus, eating Creamy Chicken Soup brings me nostalgia and comfort especially when I do not feel well. Tips for Making Creamy Chicken Soup 1. This is an optional step. Beef Mentaiko Rice Bowl - Jaja Bakes - jajabakes.com. Salmon mentaiko, beef mentaiko, and mentaiko sushi… It seems like mentaiko dishes have been trending on my social media for the last few weeks. Mentaiko dishes have been gaining popularity nowadays and as a foodie, I was curious about how they tasted.

You could find them in several Japanese restaurants with pretty expensive price tags. However, I just felt like it was wasteful just to spend so much money on tiny bites of food. I found the best way to satisfy my curiosity was by making it myself and I was glad to do so because the recipe was actually so easy. Gyudon (Beef Bowl) - Jaja Bakes - jajabakes.com. This Gyudon (Beef Bowl) tastes just like the popular Japanese fast food Yoshinoya beef bowl. Curry Omurice - Jaja Bakes - jajabakes.com. This Curry Omurice is a delicious way to step up your egg omelet recipe. The dish features beaten eggs that are pan-fried and put on top of rice with Japanese curry sauce that is smothered on the plate. About Curry Omurice. Beef Croquettes - Jaja Bakes - jajabakes.com. These Japanese Beef Croquettes are crispy on the outside with a creamy and soft interior. They are made with a combination of mashed potatoes, beef, and onion, then formed into patties, coated with breadcrumbs, and deep-fried until golden brown.

Enjoy the all-time favorite Yang Chow Fried Rice at home. It is quick and easy to make, customizable, and delicious like the ones you get from Chinese restaurants. Chicken Pesto Spaghetti - Jaja Bakes - jajabakes.com. This Chicken Pesto Spaghetti comes together quickly and is guaranteed to be a crowd-pleaser. Eat it plain or top it with chicken and cherry tomatoes for a more substantial meal. Last week, I posted a homemade and affordable Basil Walnut Pesto recipe. The Best Baked Spinach Rice. Last week was not my week in the kitchen, guys. I had earnest, ambitious designs on a beet curry that would be pink and pretty and spicy and would finally put the word “end” on my quarrel with the red/purple root.

But as the week went on and as failures occurred — unnaturally purple, watery, and nothing like what I had in mind — my enjoyment of the project plummeted. Korean Potato Cheese Pancakes - Jaja Bakes - jajabakes.com. These Korean Potato Cheese Pancakes are crispy on the outside and tender on the inside with a molten cheese center. They are easy to make with only 4 ingredients only. Lentil Soup with Coriander and Cumin. This hearty, fragrant, richly spiced lentil soup can be cooked in the pressure cooker in about a half hour or on the stove in an hour. Is there a word for when the wind sends the autumn leaves swirling in the driveway, orange blurring with gold, like calico cats chasing their tails? French Lentil and Portabella Stew. Pan Fried Chicken with Mashed Potatoes - Jaja Bakes.