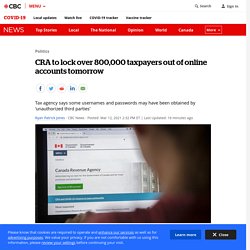 " The agency said the move is a precautionary cybersecurity measure and is being taken after a similar action in February, when over 100,000 accounts accounts were locked. "Like the accounts that were locked in February, these user IDs and passwords were not compromised as a result of a breach of CRA's online systems. Rather, they may have been obtained by unauthorized third parties and through a variety of means by sources external to the CRA," said CRA in a news release.

Rex Murphy: Were I an Albertan today, I'd be asking: What's the point? I see it as an attack on the dignity of the province and its citizens Did Trudeau not consider that if so vital a Canadian interest as its oil and gas industry was being shuttered by the new guy, so quickly, then maybe — just to show solidarity with Alberta and its oil workers and as a province of the Confederation — he should tell Mr. 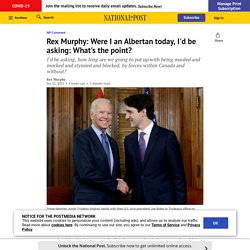 Biden he can take his first phone call and — in Doug Ford’s exemplary formulation — place it in his “ying-yang” department? Ooh, but that would not be diplomatic. It might upset many wise mouths on the TV panels. What to expect from your 2021 taxes and how to prepare. Many Canadians’ year-end tax prep may be a little different as 2020 draws to a close. 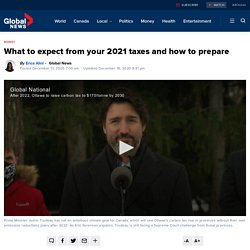 Taking a close look at your personal balance sheet before Dec. 31 is a routine exercise that can help you make the most of your savings, reduce your tax bill and boost your tax refund in the new year. But a slew of pandemic-linked emergency benefits and relief measures this year means there may be some additional financial housekeeping you need to do this time. READ MORE: Your CERB money is taxable. CPAWS – Canadian Parks and Wilderness Society. Home. Take Action - CPAWS. Every two years the Minister responsible for Parks Canada is obligated to host a Round Table to receive feedback from Canadians on the agency’s performance and priorities. 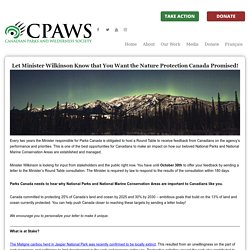 This is one of the best opportunities for Canadians to make an impact on how our beloved National Parks and National Marine Conservation Areas are established and managed. Minister Wilkinson is looking for input from stakeholders and the public right now. You have until October 30th to offer your feedback by sending a letter to the Minister’s Round Table consultation. Take Action - CPAWS. Take Action - CPAWS. The Best Tax Benefits, Rebates and Grants You Can Get for Renovating in Canada, by Province. Untitled. Sandra Laframboise says she was stunned when she found out her Canada Revenue Agency account might’ve been breached. 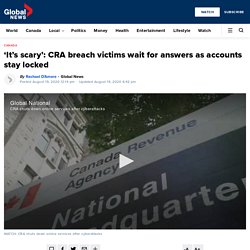 The 60-year-old Vancouver woman says she’s adamant about her security online. She regularly changes her passwords, clears her browsing data and keeps her computer software up to date. Untitled. OTTAWA — The Canada Revenue Agency has resumed all online services after fraudsters used thousands of pilfered usernames and passwords to obtain government services. 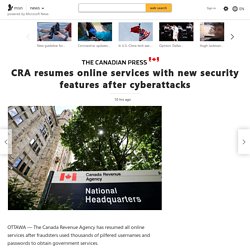 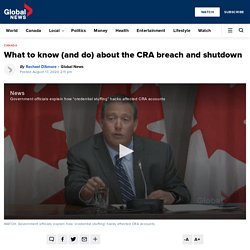 The federal government described the three separate hacks as a “credential stuffing” scheme — a type of cyberattack that uses passwords and usernames from other websites to access accounts with the CRA. Essentially, it targets people who use the same password and username for multiple login credentials. The government said the attack was detected early on and has since been brought under control, however, the CRA’s online services aren’t expected to be back up and running until Wednesday. The RCMP is now investigating the breaches. Story continues below advertisement Here’s a look at what officials say happened, and what you need to know. What happened? Untitled. The Canada Revenue Agency has temporarily shut down its online services after the agency confirmed it was recently hit by two cyberattacks that compromised thousands of accounts linked to its services. 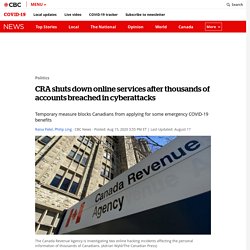 While the breaches have been contained, services connected to My Account, My Business Account and Represent a Client on the CRA website have been disabled as an additional safety measure. The shutdown means that anyone attempting to apply for emergency COVID-19 benefits, such as the Canada Emergency Response Benefit or the Canada Emergency Student Benefit, will be unable to do so until further notice. The agency said Saturday that as of Aug. 14, about 5,500 accounts had been affected by the separate attacks. Untitled. Untitled. Even in the warped reality of the COVID-19 pandemic, Canadians must file their taxes to receive many of the benefits they’re entitled to. 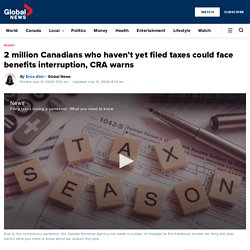 And around two million people could face interruptions to some federal and provincial payments if they wait too long to send in their 2019 tax returns, the Canada Revenue Agency warns. “The CRA recognizes that in the current COVID pandemic environment it’s imperative for benefits to continue without disruption to Canadians,” says Heather Daniels, director-general of the Benefit Programs Directorate at the CRA. Ww2.2019.turbotaxonline.intuit.ca/secure/save_logout. White: Return to the Victory Gardens. In the late 20th century, community gardens started popping up in Calgary, mostly next to community centres and schoolyards. 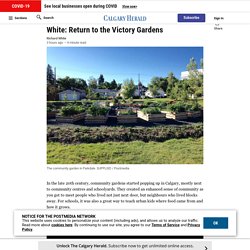 They created an enhanced sense of community as you got to meet people who lived not just next door, but neighbours who lived blocks away. For schools, it was also a great way to teach urban kids where food came from and how it grows. The modern community garden movement was also a catalyst for people to create back and front yard gardens, a practice that had pretty much been abandoned in the late 20th century as Canadians became more urbanized and moved away from their rural roots.

CRA claiming $4.4B from Canadian companies and individuals suspected of tax evasion. OTTAWA – The federal government is claiming $4.4 billion from Canadians and corporations suspected of cheating the taxman by hiding their money, notably in offshore tax havens. “The gross number is $4.4 billion at this moment. It’s many years ahead of schedule, but it remains the gross number,” said Ted Gallivan, assistant commissioner of international, large business and investigations branch at the Canada Revenue Agency.

Gallivan was responding to a question from Bloc Québécois MP Julie Vignola during a virtual meeting of the House of Commons Committee on Government Operations and Estimates on Monday. Login. Canada Revenue Agency Treats You Differently Depending On Where You Live: Auditor's Report. OTTAWA — The auditor general says the treatment you get from the Canada Revenue Agency depends on where in Canada you live and how friendly your tax man is. This violates the agency's "taxpayer bill of rights," which says every taxpayer deserves the same service as every other taxpayer in the same situation.

Service Alberta: Housing, property & utilities. Income Support service standards. Disability benefits. Living with a disability Services and financial benefits to assist people with disabilities and their families. Child Disability Benefit Determine if you are eligible to receive a tax-free benefit for families caring for a child with a disability, learn how the benefit is calculated, and obtain the forms necessary to apply. Canada Pension Plan disability benefits Taxable benefit you may be eligible for if you are unable to work because of a disability. Federal excise gasoline tax refund program Apply for a refund for some of the gas you buy if you have a mobility impairment that prevents the use of public transportation. Disability Services - Alberta Human Services - Government of Alberta. People with disabilities. Alberta Aids to Daily Living: Alberta Health website.