Just like her mum! Royal fans go wild over how much the Duchess of Cambridge looks like mother Carole Middleton after Kensington Palace shared throwback Mother's Day snap. Just like her mum! 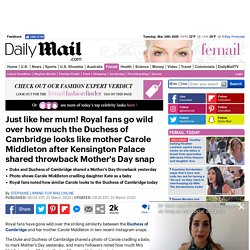 The strong family resemblance was pointed out by another of Instagram fan accounts, including MiddletonMaven. One follower posted: 'Wow! Loaded: 0% Princess Eugenie on Instagram: “Happy Mother's Day!! □ Today I want to celebrate my mumma but also all the amazing mothers out there. I would like to celebrate all the…” Queen Elizabeth II Is in Good Health After Palace Aide Contracts Coronavirus. 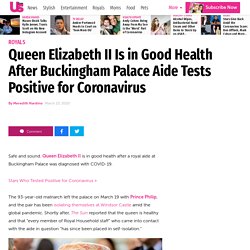 By Simon Perry @SPerryPeoplemag Like any proud parent, Queen Rania enjoys seeing her children make their way in the world – but she’s delighted to have them all back under one roof for the festive season. 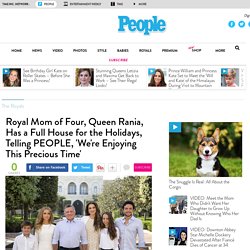 She and husband King Abdullah of Jordan have just welcomed son and heir to the throne, Crown Prince Hussein, 21, and daughter Princess Iman, 19, back from Washington, D.C., where they are both studying. Now, their family home is buzzing with spirited young children as the college students join siblings, Princess Salma, 15, and Prince Hashem, 9. Prince Carl Philip and Sofia Hellqvist Royal Wedding; Stylish princesses. Prince Harry cancels 2020 Invictus Games. Prince William Speaks Out in Personal Video Message Amid Coronavirus.

Manage Push Notifications If you have opted in for our browser push notifications, and you would like to opt-out, please refer to the following instructions depending on your device and browser. 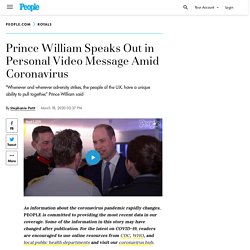 The Queen has issued a message of solidarity following the coronavirus outbreak, saying families around the UK were entering "a period of great concern and uncertainty". 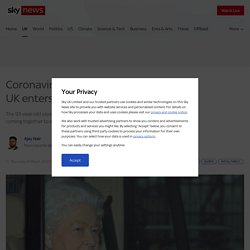 It comes after she moved from Buckingham Palace to Windsor Castle a week earlier than planned for the Easter period - and will likely stay there longer than originally thought - with coronavirus at its most widespread in London. She has also cancelled a number of her public appearances in the coming months. In a statement, she said: "As Philip and I arrive at Windsor today, we know that many individuals and families across the United Kingdom, and around the world, are entering a period of great concern and uncertainty.

Buckingham Palace Insists Prince Philip Is ‘Absolutely Fine’ After Rumours Of His Death From COVID-19. By Brent Furdyk. 18 Mar 2020 9:25 PM Prince Philip has rarely been seen in public since his retirement in 2017, and this week rumours began to make the rounds on the Internet that the 98-year-old Duke of Edinburgh was dead, and the coronavirus was to blame. 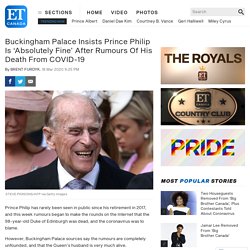 However, Buckingham Palace sources say the rumours are completely unfounded, and that the Queen’s husband is very much alive. The rumours started, reported the Express, when an anonymous What’s App user claimed the Duke had succumbed to the coronavirus. RELATED: Prince Harry And Meghan Markle Release Powerful Statement Amid Coronavirus Crisis: ‘These Are Uncertain Times’ “Source close to Buckingham Palace tells me he’s absolutely fine,” Telegraph editor Gareth Davies told the Express.

“I don’t know what would possess someone to start a lie like that, but stop,” added Davies. British, Swedish and Norwegian royal family connections in new family tree. It turns out that royal families around the world share a lot more than an incredible sense of style and devotion to their countries – some actually share bloodlines, too, and there’s a new interactive Scandinavian ancestry tree by Expedia to prove it. 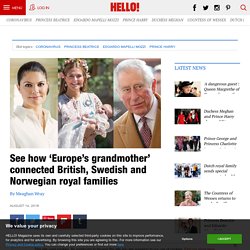 By putting to work almost 200 years of royal history, the new service clearly shows the connections between many European royals across the continent. Interestingly enough, many of the English-Swedish royal links date back further than that, and all history points to a woman who was called “Europe’s grandmother.” 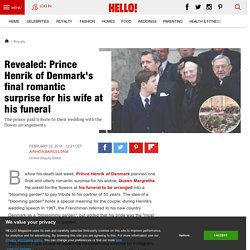 He asked for the flowers at his funeral to be arranged into a "blooming garden" to pay tribute to his partner of 50 years. The idea of a "blooming garden" holds a special meaning for the couple; during Henrik's wedding speech in 1967, the Frenchman referred to his new country Denmark as a "blossoming garden", but added that his bride was the "most beautiful adornment" in the garden. The Danish royal palace revealed the heartwarming surprise on Instagram, by sharing a photo of the sea of flowers at the private funeral. 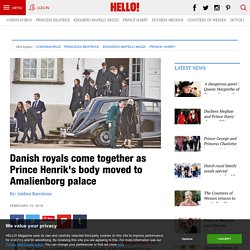 The group rode in convoy, following Prince Henrik's coffin which was being transferred from Fredensborg Castle, where the Prince died, to Amalienborg Palace in Copenhagen. After the half-hour journey, palace staff helped carry Henrik's coffin into the palace. The royals then gathered in the palace square where they took in the sea of flowers and messages that members of the public had left. Crown Princess Mary and her husband Crown Prince Frederik were joined by their four children Prince Christian, 12, Princess Isabella, ten, and seven-year-old twins Princess Josephine and Prince Vincent.

Prince Joachim and his wife Princess Marie brought their two children Prince Henrik, eight, and Princess Athena, six. Prince Henrik had the most romantic surprise for his wife Queen Margrethe at his funeral. Dutch royal family sends special message to health care workers during coronavirus pandemic. The Dutch Royal Family took to social media on March 17 to express their gratitude and support for health care workers and everyone working to keep the Netherlands functioning during the coronavirus pandemic. 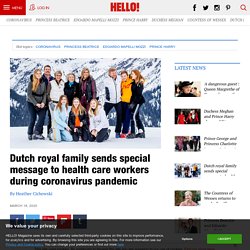 A video clip of King Willem-Alexander and Queen Máxima and their three teenage daughters, Princess Amalia, 16, Princess Alexia, 14, and Princess Ariane, 12, was shared on the official Instagram account of the Royal House of the Netherlands, Koninklijk Huis. The Dutch royals are seen clapping their hands and cymbals on a balcony of the Paleis Huis ten Bosch in The Hague, Netherlands at night. After their thankful applause, Willem-Alexander says a few words in Dutch. 'A dangerous guest': Queen Margrethe of Denmark urges the country to stay home in coronavirus pandemic. Denmark's Queen Margrethe II has made a rare speech addressing the coronavirus pandemic, urging citizens to stay home and listen to health advice to defeat the global health emergency.

Aside from her annual New Year's Eve speech, the 79-year-old hardly ever addresses the nation. In her comments, the Queen said it is crucial for all Danes to act now to prevent the spread of the virus. As of March 18, Denmark had recorded 977 cases and four deaths from COVID-19, according to the World Health Organization. "I have an appeal to everyone: coronavirus is a dangerous guest," Margrethe said. Photos: King Willem-Alexander and Queen Maxima's royal tour of Indonesia. Karl von Habsburg is the first royal to be diagnosed with coronavirus.

Karl von Habsburg, the ancestral Archduke of Austria, has been placed in quarantine after he was diagnosed with the coronavirus. The 59-year-old, who is head of the House of Habsburg-Lorraine and also holds the ancestral title of Royal Prince of Hungary, Bohemia and Croatia, told Austria's oe24 TV network that he tested positive for COVID-19.

"It's annoying, but I'm fine," he said. Kate Middleton says Prince George is learning guitar while Princess Charlotte is very into gymnastics. Prince George turns seven this year and Princess Charlotte will be five in less than two months' time, and as they both grow, they're picking up some new interests and hobbies! On March 5, Duchess Kate shared some things her two eldest children enjoy doing while she and Prince William visited Tribeton, an events space in Galway, Ireland on the last day of their tour of the country. The couple watched some performers who will be part of the upcoming European Capital of Culture event this year and tried their hands at juggling. The acrobats, musicians and circus performers seriously impressed the Duke and Duchess of Cambridge.

Thomas's Battersea, the London school attended by both Prince George and Princess Charlotte, will close due to the coronavirus pandemic. For the time being, the two little royals will move to home-schooling at Kensington Palace as of March 20. "Due to the increasing number of children and staff absent from school because of the coronavirus pandemic, Thomas's London Day Schools have decided to move to remote learning from Friday 20 March," a spokesperson told HELLO! UK. "From this date, the curriculum will be taught through online learning platforms and we have asked parents to keep their children at home and to access their lessons through this system. In cases where families are not in a position to keep their children at home (those who are 'front line staff' in the medical profession, for example), the school will remain physically open until the last day of term, Thursday 26 March.

Her visit was part of her role as the Vice-Patron of the equine charity, The British Horse Society (BHS). The Countess of Wessex returns to work after illness. Princess Beatrice and Edoardo Mapelli Mozzi cancel wedding reception due to coronavirus concerns. Princess Beatrice and Edoardo Mapelli Mozzi have cancelled the wedding reception they had planned following their nuptials, which are scheduled to take place on May 29. The couple, who announced they were engaged in September 2019, are still set to wed at the Chapel Royal at St. How Meghan Markle and Prince Harry are dealing with coronavirus in Canada. The latest way Princess Charlotte is taking after mum Kate Middleton. © @Copyright HELLO! Hello! The Official Website of The Duke & Duchess of Sussex.