(2) Learn English with Downton Abbey. Debate: Republic vs monarchy in the UK - Debatepedia. The Royal House of Windsor review – we really don’t need another history lesson. Oh, how I got my hopes up. 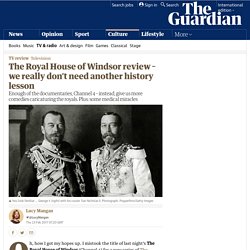 I mistook the title of last night’s The Royal House of Windsor (Channel 4) for a new series of The Windsors, last year’s superbly daft sitcom about the royals that caricatures them all exactly as you would expect them to be – the memory of Prince Harry calling his sister in law “Puppah” still makes me laugh my leg off. Instead we got another of those documentaries about the nation’s favourite ermine-sporters, of which the once-radical Channel 4 seems so inexplicably fond. Every year it appears to commission about 80 hours of historians once again taking us through those tricky George V-to-1945 years, full of jerky footage from Ye Not Too Olde Days, thrillingly informal snaps of the Windsors at play, and dry facts made more palatable by a smattering of unexpected talking heads, who take the national sport of vowel-stretching (it’s what you do if you’re too posh even for polo) to new levels.

‘Essentially, the monarchy is corrupt’ – will republicanism survive Harry and Meghan? Republic Royal Secrets Leaflet. The Official Website of The Duke & Duchess of Sussex. Will the monarchy survive the death of the Queen? You only have to spend a moment in the company of Her Majesty Queen Elizabeth II to realise how entrenched the symbolism of the royal family is upon our daily lives. 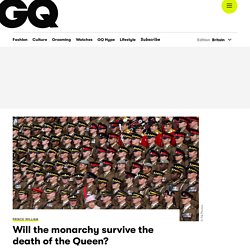 Our monarch is no mere celebrity or star, she is the embodiment of our national identity, the woman after whom our second Elizabethan age will be known to history. Our national life is the Queen’s life: she addresses us on Christmas Day, appears on the face of postage stamps, and we carry her image with us from infancy to death on every coin and every note in our pockets. To come face to face with the Queen is to encounter the near-mythical bedrock of our national identity. It is almost inconceivable that this could ever change, but old certainties do not deserve to last simply by virtue of their vintage, and the modern world can be unkind to settled truths. Monarchy will be 'on last legs by 2030 once Queen is no longer on the throne' The British monarchy could be on its "last legs" by 2030, a historian has suggested. 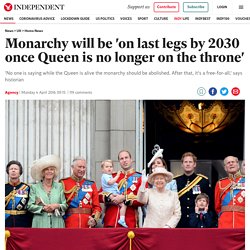 Most monarchies end violently - but how much would Britain really change if it voted to be a republic? Coming from across the Atlantic, it strikes me as stubborn and sort of rebellious that, as the third millennium approaches its third decade, the British don’t live in a republic, and they’re extremely unabashed about it. 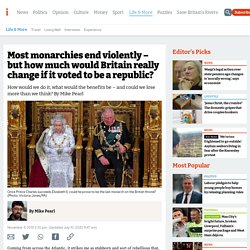 You regularly vote in fair elections, but you don’t get to pick your head of state. They are born into the job and referred to as “majesty”. The King or Queen sleeps in castles, wears a crown, holds a sceptre, and taps people on the shoulders with a sword to confer accolades. He or she is a performer of rituals, essentially. Elizabeth II is an adorable great-grandmother, lover of small dogs and pastel hats. Global views of the royal family. Which members of the Royal Family are liked the most? 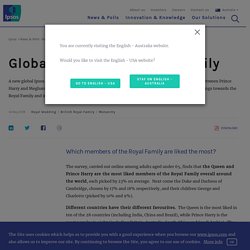 The survey, carried out online among adults aged under 65, finds that the Queen and Prince Harry are the most liked members of the Royal Family overall around the world, each picked by 23% on average. Next come the Duke and Duchess of Cambridge, chosen by 17% and 18% respectively, and their children George and Charlotte (picked by 10% and 9%). Different countries have their different favourites. Monarchy/Royal Family Trends - Monarchy v Republic 1993-2016. Why does the UK love the monarchy? Image copyright Getty Images I have recently been accused on Twitter of being both a royalist "uber-Toady" and the author of "the most anti-monarchist report you could want to view". 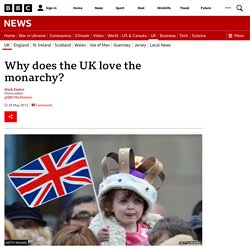 Both tweets related to the same item, a report for the BBC News at Ten that tried to answer a straightforward question: why does a country that has become so cynical about other institutions (Parliament, the City, the press, the police) remain so loyal to the monarchy? Whatever republicans might wish, less than a fifth of the Queen's subjects in the UK say they want to get rid of the Royal Family - a proportion that has barely changed across decades.

According to polling data from Ipsos Mori, support for a republic was 18% in 1969, 18% in 1993, 19% in 2002 and 18% last year. Three-quarters of the population want Britain to remain a monarchy - a finding that has been described by pollsters as "probably the most stable trend we have ever measured". Media playback is unsupported on your device. 8 reasons constitutional monarchy is the best form of government. (17) Is The Royal Family Still Relevant Today? Explained: Why does Britain still have a Royal family? (17) The modern-day relevance of the British monarchy. Meghan and Harry’s Royal Exit: What Surprises and Concerns a Royal Expert. Biographer and former Vanity Fair contributing editor Sally Bedell Smith has been studying the British royal family for over 20 years now—speaking to members of the family’s innermost circles, pouring over its archives, and tracking the monarchy’s evolution—while writing her best-selling biographies on Princess Diana, Queen Elizabeth, and Prince Charles. 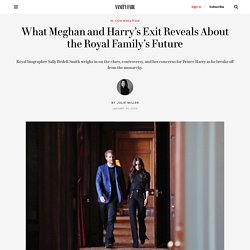 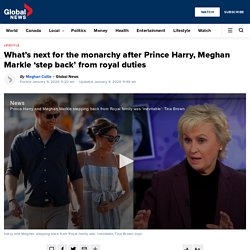 The Duke and Duchess of Sussex took to Instagram to share the news, writing: “After many months of reflection and internal discussions, we have chosen to make a transition this year in starting to carve out a progressive new role within this institution.” The move is largely without precedent, and now, royal watchers around the world are waiting with bated breath to see what this move will actually mean for their family and the monarchy at large. READ MORE: Prince Harry, Meghan Markle to ‘step back’ from senior royal duties Carolyn Harris, a royal historian and author in Toronto, is waiting to see how the Queen responds to the announcement in the days and weeks to come.

Story continues below advertisement. Prospects For Harry And Meghan’s ‘Sussex Royal’ Brand. For years the royals have been a cash cow for the British economy and its merchants.

In 2017 the global Brand Finance firm estimated the annual contribution of the royal family at £1.8 billion ($2.33 billion), including £500 million in tourism, £193 million in Royal Warrants (official endorsements for over 800 brands used by the royals), £150 million in royal souvenir trade, and £200 million in informal endorsements (the “Kate effect” in fashion, in particular), while the average British taxpayer pays roughly £0.65 (the cost of a postage stamp) annually for their upkeep. “Consider that against what the Queen does and represents for this country, I believe it represents an excellent value for the money,” Alan Reid, the queen’s treasurer, told Reuters recently. In other words, the royals generate a profit. On top of the royal’s day-to-day economic contribution, nothing is more financially lucrative than special royal events, most especially weddings.

(3) What is the future for the royal family? I Comment.