Intersectionality, explained: meet Kimberlé Crenshaw, who coined the term. There may not be a word in American conservatism more hated right now than “intersectionality.” 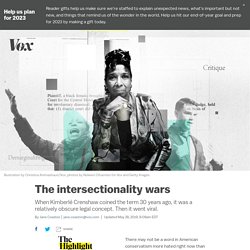 On the right, intersectionality is seen as “the new caste system” placing nonwhite, non-heterosexual people on top. To many conservatives, intersectionality means “because you’re a minority, you get special standards, special treatment in the eyes of some.” It “promotes solipsism at the personal level and division at the social level.” It represents a form of feminism that “puts a label on you. It tells you how oppressed you are. This is a highly unusual level of disdain for a word that until several years ago was a legal term in relative obscurity outside academic circles.

In my conversations with right-wing critics of intersectionality, I’ve found that what upsets them isn’t the theory itself. But Crenshaw isn’t seeking to build a racial hierarchy with black women at the top. Meet Kimberlé Crenshaw Crenshaw has watched all this with no small measure of surprise. Meet Kimberlé Crenshaw. How knowledge about different cultures is shaking the foundations of psychology.

The academic discipline of psychology was developed largely in North America and Europe. 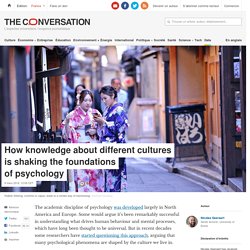 Some would argue it’s been remarkably successful in understanding what drives human behaviour and mental processes, which have long been thought to be universal. But in recent decades some researchers have started questioning this approach, arguing that many psychological phenomena are shaped by the culture we live in. Clearly, humans are in many ways very similar – we share the same physiology and have the same basic needs, such as nourishment, safety and sexuality. So what effect can culture really have on the fundamental aspects of our psyche, such as perception, cognition and personality? Let’s take a look at the evidence so far. Experimental psychologists typically study behaviour in a small group of people, with the assumption that this can be generalised to the wider human population. However, this isn’t the case. Thinking styles The self Mental health. On Finding Identity (Or Having It Find You)

Like most people, I had an identity crisis in my late teens to early twenties. 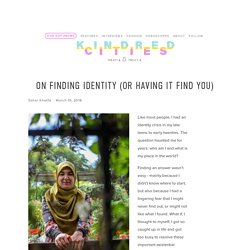 The question haunted me for years: who am I and what is my place in the world? Finding an answer wasn’t easy - mainly because I didn’t know where to start, but also because I had a lingering fear that I might never find out, or might not like what I found. What if, I thought to myself, I got so caught up in life and got too busy to resolve these important existential questions, only to be haunted with them again in retirement when it was too late? Then came grade 12 English class where, lo and behold, our teacher announced to us that we would be spending the entire semester exploring concepts of identity.

So, I basically had to face my demons and figure out exactly who I was. I was certainly human, female, and Muslim. My Muslim identity was here to stay. Grade 12 English progressed and our teacher pushed us to reflect on our short lives thus far to find our identities. GIGAMOV Pop Culture. Manitoba-immigrants-fell-in-love-at-their-local-tim-hortons-1. Indigenous business owner's Cree surname brings questions, ridicule - CBC News. A small business owner from Rockland, Ont., hopes talking about the problems she regularly faces because of her Cree surname will make things less difficult down the road. 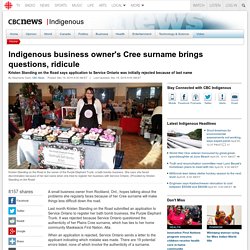 " She has since received notification that her application was accepted. Student identity on the walls in Philly. By Joshua Kleiman and Charlie McGeehan Purchase a PDF of this article Our public art project, 24 8x10-ft. banners with student photographs and writing, had just been installed on walls in the community around our school. 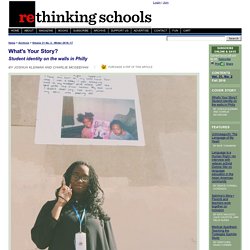 We received an email from the owner of the building where Natasha’s work had been installed. He asked us to respond to one of his tenants, who had questioned the “dark content.” We wrote the tenant, explaining that our intent was to amplify the voices of our students and show that their stories matter in our neighborhood. Very cool project, and I’ll always support anyone trying to express themselves. . . . People expect student work, especially from our most marginalized communities, that either projects overt positivity or evokes pity. What’s Your Story? KCAPA is located at the southern end of Kensington; most students travel from the northern, more predominantly Black and Latina/o parts of Kensington.