Freeing the spirit of enquiry by Dr Rupert Sheldrake. Science at its best is an open-minded method of enquiry; it has been successful because it has been open to new discoveries. 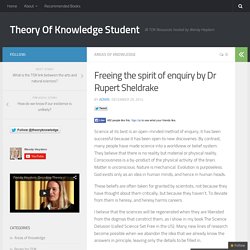 By contrast, many people have made science into a worldview or belief system. They believe that there is no reality but material or physical reality. Consciousness is a by-product of the physical activity of the brain. 8 Logical Fallacies That Fuel Anti-Science Sentiments. I've never been so angry at an appeal to faith as when I read a peice in the Watchtower (Jehovah's Witness mag) on global warming. 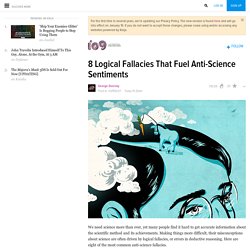 It presented both sides equally ("Some people belive this... Some people belive that... ") but what made me throw it across the room was the conclusion, which was basically, "Whether global warming is man-made or natural, it doesn't matter because god will protect us and make sure we're not hurt by it. " This particular piece of dreck was delivered to my door by a Jehovah's Witness who made his five year old son do all the talking. The cute little moppet had been made to memorize questions like, "Do-do you believe that there can be a world without suffering where people can live in harmony?

" while smiling at him and glaring at his father, I answered, "Yes, if people work very hard at it. " The Weird Reason It’s Hard to Empathise And Be Logical At The Same Time. The strange influence of empathising on the capacity for logical thought. 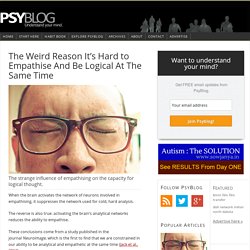 When the brain activates the network of neurons involved in empathising, it suppresses the network used for cold, hard analysis. The reverse is also true: activating the brain’s analytical networks reduces the ability to empathise. These conclusions come from a study published in the journal Neuroimage, which is the first to find that we are constrained in our ability to be analytical and empathetic at the same time (Jack et al., 2012). 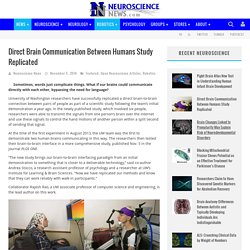 What if our brains could communicate directly with each other, bypassing the need for language? University of Washington researchers have successfully replicated a direct brain-to-brain connection between pairs of people as part of a scientific study following the team’s initial demonstration a year ago. In the newly published study, which involved six people, researchers were able to transmit the signals from one person’s brain over the Internet and use these signals to control the hand motions of another person within a split second of sending that signal.

At the time of the first experiment in August 2013, the UW team was the first to demonstrate two human brains communicating in this way. Can Scientific Belief Go Too Far? : 13.7: Cosmos And Culture. Magic Mushrooms Create a Hyperconnected Brain. Magic mushrooms may give users trippy experiences by creating a hyperconnected brain. 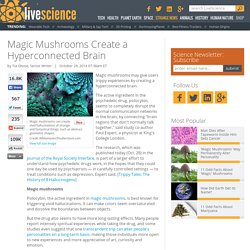 The active ingredient in the psychedelic drug, psilocybin, seems to completely disrupt the normal communication networks in the brain, by connecting "brain regions that don't normally talk together," said study co-author Paul Expert, a physicist at King's College London. 5 Problems with Atheist Ideas: Conflicts with Atheism Part II. Study: Your brain sees things you don't. University of Arizona doctoral degree candidate Jay Sanguinetti has authored a new study, published online in the journal Psychological Science, that indicates that the brain processes and understands visusal input that we may never consciously perceive. 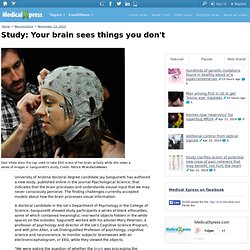 The finding challenges currently accepted models about how the brain processes visual information. A doctoral candidate in the UA's Department of Psychology in the College of Science, Sanguinetti showed study participants a series of black silhouettes, some of which contained meaningful, real-world objects hidden in the white spaces on the outsides. Saguinetti worked with his adviser Mary Peterson, a professor of psychology and director of the UA's Cognitive Science Program, and with John Allen, a UA Distinguished Professor of psychology, cognitive science and neuroscience, to monitor subjects' brainwaves with an electroencephalogram, or EEG, while they viewed the objects. Shared decisions benefit next generations. A controlled voting system can help a community manage resources sustainably so that future generations can still enjoy them, according to a study published today in Nature1 and re-enacted in this Nature Video. 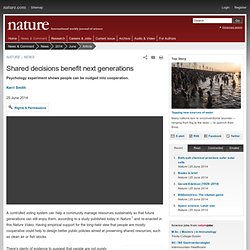 Having empirical support for the long-held view that people are mostly cooperative could help to design better public policies aimed at preserving shared resources, such as clean air or fish stocks. There’s plenty of evidence to suggest that people are not purely self-interested. But although economists have long studied how people cooperate in groups, they have not looked specifically at whether individuals are happy to share resources with future generations, who cannot return the favour. Evolutionary dynamicist Martin Nowak at Harvard University in Cambridge, Massachusetts, and his team wanted to test whether groups of people could sustain a resource over several ‘generations’ of players.

We dislike being alone with our thoughts. Cancer boy who planned his own funeral faces his toughest test...coping with miracle recovery: Deryn, 14, reveals his struggle to accept a new lease of life after he was given just days to live. Deryn Blackwell is one of five people on the planet to get the rare diseaseHe had been preparing for his own funeral before he began his recoveryWas told that 'he wouldn't see Christmas by doctors'Medical professionals are now puzzled as to how he has survivedHis parents claim that during the ordeal he was 'relentlessly optimistic' By Hannah Ellis-petersen Published: 22:04 GMT, 22 February 2014 | Updated: 22:04 GMT, 22 February 2014. 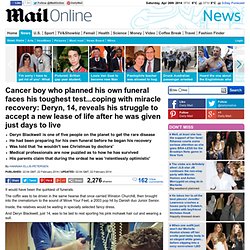 Belief in immortality hard-wired? Study examines development of children's 'prelife' reasoning. Most people, regardless of race, religion or culture, believe they are immortal. 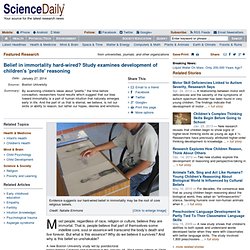 That is, people believe that part of themselves-some indelible core, soul or essence-will transcend the body's death and live forever. But what is this essence? Why do we believe it survives? And why is this belief so unshakable? A new Boston University study led by postdoctoral fellow Natalie Emmons and published in the January 16, 2014 online edition of Child Development sheds light on these profound questions by examining children's ideas about "prelife," the time before conception. Emmons' study fits into a growing body of work examining the cognitive roots of religion.

"This work shows that it's possible for science to study religious belief," said Deborah Kelemen, an Associate Professor of Psychology at Boston University and co-author of the paper. Sam Harris on Spirituality without Religion, Happiness, and How to Cultivate the Art of Presence. By Maria Popova “Our world is dangerously riven by religious doctrines that all educated people should condemn, and yet there is more to understanding the human condition than science and secular culture generally admit.” 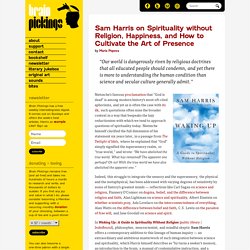 Nietzsche’s famous proclamation that “God is dead” is among modern history’s most oft-cited aphorisms, and yet as is often the case with its ilk, such quotations often miss the broader context in a way that bespeaks the lazy reductionism with which we tend to approach questions of spirituality today. Nietzsche himself clarified the full dimension of his statement six years later, in a passage from The Twilight of Idols, where he explained that “God” simply signified the supersensory realm, or “true world,” and wrote: “We have abolished the true world. Researcher: Hallucinatory 'voices' shaped by local culture. By Clifton B. Parker Steve Fyffe Tanya Luhrmann, professor of anthropology, studies how culture affects the experiences of people who experience auditory hallucinations, specifically in India, Ghana and the United States.

Scientists identify a mathematical 'crystal ball' that may predict calamities. Neuroscientists have come up with a mathematical equation that may help predict calamities such as financial crashes in economic systems and epileptic seizures in the brain. The University of Sussex-led study, published this week (24 October 2013) in Physical Review Letters, could have far-reaching implications. If the principle is generalised in other real-world complex systems, such as climate change or disease control, it could open up the possibility of catastrophes being averted before they happen.