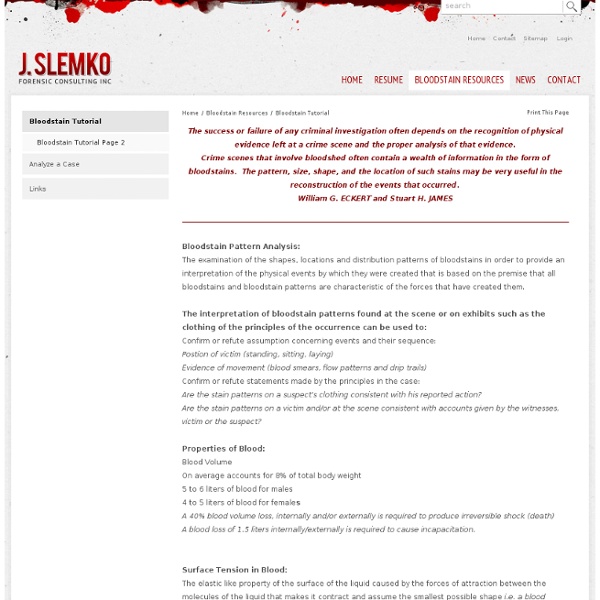 The success or failure of any criminal investigation often depends on the recognition of physical evidence left at a crime scene and the proper analysis of that evidence. Crime scenes that involve bloodshed often contain a wealth of information in the form of bloodstains. The pattern, size, shape, and the location of such stains may be very useful in the reconstruction of the events that occurred. William G. Bloodstain Pattern Analysis: The examination of the shapes, locations and distribution patterns of bloodstains in order to provide an interpretation of the physical events by which they were created that is based on the premise that all bloodstains and bloodstain patterns are characteristic of the forces that have created them. The interpretation of bloodstain patterns found at the scene or on exhibits such as the clothing of the principles of the occurrence can be used to: Properties of Blood: A blood loss of 1.5 liters internally/externally is required to cause incapacitation.

Ballistics ThrillWriting: Blood Pattern Information for Thriller Writers But also, my youngest daughter is a type 1 diabetic. I prick her finger, and use her blood, an average of 21 times a day to figure things out. A drop of blood is analyzed by her meter giving me a snap shot of what’s going on in her body. Is it the whole picture? No. Is it the big picture? This is my understanding of how a forensic scientist goes to work. Mechanisms o:f Deposition:Passive - clot, drip, pool, flow saturation, serum separation.Transfer - swipe and wipeProjected - arterial spurts, cast off, expiration, splashesMiscellaneous - fly spots, voids Transfer Patterns - occur when an object that has blood on it rests on a surface leaving an outline. Blood will change its pattern based on the angle at which it contacted the surface. THE USE OF LCV - is a chemical substance that is used to check for blood in - * Missing person cases where a crime is suspected. * Areas where a suspected violent crime occurred but it has been cleaned/bleached * Visible substances suspected to be blood

The History of Fingerprints Fingerprints offer a reliable means of personal identification. That is the essential explanation for fingerprints having replaced other methods of establishing the identities of persons reluctant to admit previous arrests. 1 The science of fingerprint identification 5 stands out among all other forensic sciences for many reasons, including the following: Other visible human characteristics, such as facial features, tend to change considerably with age, but fingerprints are relatively persistent. In earlier civilizations, branding or maiming were used to mark persons as criminals. Before the mid-1800s, law enforcement officers with extraordinary visual memories, so-called "camera eyes," identified previously arrested offenders by sight alone. Around 1870, French anthropologist Alphonse Bertillon devised a system to measure and record the dimensions of certain bony parts of the body. Upon investigation, there were indeed two men who looked very similar. AD 1400s - Persia 1600s 1685 - Bidloo

Blood Spatter Analysis Stories about famous serial killers and murder cases at the Crime Library. on truTV.com The Frankford area of Philadelphia was once a town older than the City of Brotherly Love itself. At one time, it was a prosperous area, but by 1980 it had become a crime-ridden slum populated by prostitutes, junkies, and small businesses struggling to survive. This was the area that Sylvester Stallone selected as the setting for his film Rocky. It was here in 1985 where the first victim was found in a railroad yard. Helen Patent was nude from the waist down and she had been posed in a sexually provocative position, with her legs open and her blouse pulled up to expose her breasts. Between seven and eight women from 28-68 became the victims of this violent rapist and serial killer in an old section of Philadelphia.

Introduction introduction Serial killers both disgust and fascinate us. Though we could never fathom commiting such heinous crimes, we nonetheless are intrigued by those who do. Yet, it should be noted that this web page is in no way designed to give "credit" or undo press to these sick and twisted people. Rather, it is an exploration of abnormal psychology, human nature, and the state of our society today. Murder Murder is defined as the willful and unlawful killing of one human being by another. Generally, murder/homicide occurs due to one of two basic motivations: the reaction murder: as an outcome of an event: a quarrel, rage, reaction to an insult, or jealousy, and the"for gain" type of murder: for monetary gains, revenge, protection of ones self, or even power. Serial Murder Serial murder is a completely different form of murder that does not fall into the two aforementioned motives of "normal" murder, if there is such a thing. More specifically, a series of killings may be classified as serial murder when:

Fingerprinting Crime Scene Investigation Profile of Serial Killer Ted Bundy Ted Bundy: He was attractive, smart, and had a future in politics. He was also one of the most prolific serial killers in U.S. history. Ted Bundy screamed his innocence until his death in the electric chair became imminent, then he tried to use his victims one more time - to keep himself alive. His plan failed and the world got a glimpse of the true evil inside him. Take the Ted Bundy Trivia Quiz Theodore Robert Cowell: Ted Bundy was born Theodore Robert Cowell to Louise Cowell on November 24, 1946, at the Elizabeth Lund Home for Unwed Mothers in Burlington, Vermont. Bundy's Teenage Years: Despite his parental circumstances and meager surroundings Bundy was well behaved and grew into an attractive teen who was generally liked and who performed well in school. Socially Challenged: Throughout his years at high school Bundy suffered from acute shyness that resulted in his appearing socially awkward. Bundy's First Love: Depression and Whispered Rumors: "Elizabeth": A New Ted Bundy: