The History of Fingerprints 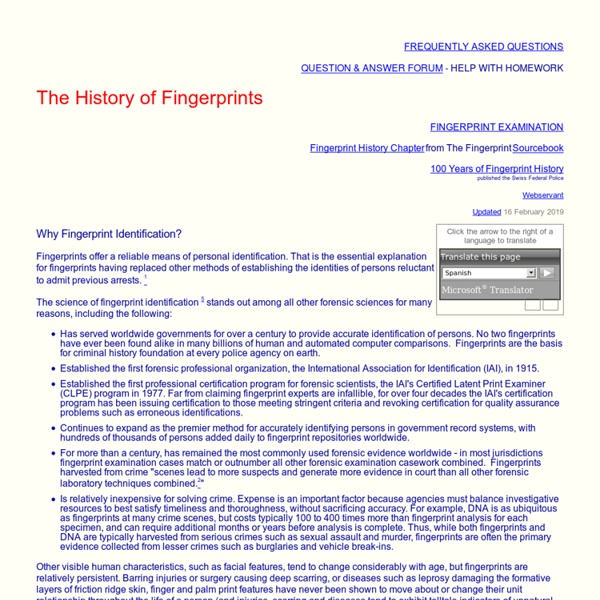 Fingerprints offer a reliable means of personal identification. That is the essential explanation for fingerprints having replaced other methods of establishing the identities of persons reluctant to admit previous arrests. 1 The science of fingerprint identification 5 stands out among all other forensic sciences for many reasons, including the following: Other visible human characteristics, such as facial features, tend to change considerably with age, but fingerprints are relatively persistent. Barring injuries or surgery causing deep scarring, or diseases such as leprosy damaging the formative layers of friction ridge skin, finger and palm print features have never been shown to move about or change their unit relationship throughout the life of a person (and injuries, scarring and diseases tend to exhibit telltale indicators of unnatural change). In earlier civilizations, branding or maiming were used to mark persons as criminals. AD 1400s - Persia 1600s 1685 - Bidloo 1788 - Mayer Dr. Related:  forensic science

Crime scene A crime scene is a location where a crime took place (or another location where evidence of the crime may be found), and comprises the area from which most of the physical evidence is retrieved by law enforcement personnel, crime scene investigators (CSIs) or in rare circumstances, forensic scientists. Crime scenes may or may not be where the crime was committed. There are different levels and types of crime scenes. Crime scene preservation[edit] A perimeter is taped off with barricade tape in order to keep only those necessary on site. This is done to prevent Contaminated Evidence. Documentation[edit] Photographs of all evidence are taken before anything is touched, moved, or otherwise further investigated. Evidence collection[edit] Evidence is collected through two ways: forensics and interviews. Types of crime scenes[edit] Different types of crime scenes include outdoors, indoor, and conveyance. Reconstruction[edit] See also[edit] External links[edit]

Blood Spatter Analysis CSI effect The CSI effect, also known as the CSI syndrome[1] and the CSI infection,[2] is any of several ways in which the exaggerated portrayal of forensic science on crime television shows such as CSI: Crime Scene Investigation influences public perception. The term most often refers to the belief that jurors have come to demand more forensic evidence in criminal trials, thereby raising the effective standard of proof for prosecutors. While this belief is widely held among American legal professionals, some studies have suggested that crime shows are unlikely to cause such an effect, although frequent CSI viewers may place a lower value on circumstantial evidence.[3] As technology improves and becomes more prevalent throughout society, people may also develop higher expectations for the capabilities of forensic technology.[4] There are several other manifestations of the CSI effect. Background[edit] Several aspects of popular crime shows have been criticized as being unrealistic. Trials[edit]

Ballistics CSI: THE EXPERIENCE - Press / Media, Exhibit Walk-Through Exhibit Walk-Through When you visit CSI: The Experience, you first enter a Briefing Theater to watch a fast-paced introduction on a giant flat-screen TV. None other than Anthony E. Finally, CSI's lead investigator, Gil Grissom, steps in and introduces himself as your CSI supervisor. You then begin an intriguing journey to solve a crime mystery by entering one of three very different crime scenes: The Crime Scenes In "A House Collided" a car has run through the living room window of a house in a quiet suburb. In "Who Got Served?" In "No Bones About It!" Beginning the Investigation After exiting the crime scenes, you'll refer to a large wall of crime scene photos and clues you may have missed then begin to analyze evidence in two highly interactive lab areas, each featuring multiple stations that allow for various evidence testing. For "Who Got Served?" Cracking the Case Here lies the moment of truth.

Bloodstain Tutorial The success or failure of any criminal investigation often depends on the recognition of physical evidence left at a crime scene and the proper analysis of that evidence. Crime scenes that involve bloodshed often contain a wealth of information in the form of bloodstains. The pattern, size, shape, and the location of such stains may be very useful in the reconstruction of the events that occurred. William G. ECKERT and Stuart H. JAMES Bloodstain Pattern Analysis: The examination of the shapes, locations and distribution patterns of bloodstains in order to provide an interpretation of the physical events by which they were created that is based on the premise that all bloodstains and bloodstain patterns are characteristic of the forces that have created them. The interpretation of bloodstain patterns found at the scene or on exhibits such as the clothing of the principles of the occurrence can be used to: Properties of Blood: Surface Tension in Blood: Target Surface Texture:

CSI: THE EXPERIENCE — Web Adventures Attention all teachers, students, or even just the curious--we have a variety of fun, interesting, and education activites free for the download. Click here to see how bone length can be used to calculate height, create your own bill for forensic testing, or solve forensic logic problems--and more! Looking for some fun forensic activites to do at home? From blood spatter analysis to DNA extractions, we've got fun (yet safe) activites for all ages. Check it out! Check here for a collection of new activites guaranteed to put your forensic skills to the test. Looking for even more information on forensic science and criminalists?

Stories about famous serial killers and murder cases at the Crime Library. on truTV.com The Frankford area of Philadelphia was once a town older than the City of Brotherly Love itself. At one time, it was a prosperous area, but by 1980 it had become a crime-ridden slum populated by prostitutes, junkies, and small businesses struggling to survive. This was the area that Sylvester Stallone selected as the setting for his film Rocky. It was here in 1985 where the first victim was found in a railroad yard. Helen Patent was nude from the waist down and she had been posed in a sexually provocative position, with her legs open and her blouse pulled up to expose her breasts. Between seven and eight women from 28-68 became the victims of this violent rapist and serial killer in an old section of Philadelphia.

Armadillidium vulgare Armadillidium vulgare are omnivorous organisms that have been found to eat a wide variety of matter. They are known to eat dead plant matter, but also will occasionally eat leaves of plants that are clinging to life. Additionally, the organism consumes carcasses of dead invertebrates, larger organisms in various states of decomposition, and on rare occasions, they even consume individuals of their own species (Paris 1963). Most importantly, however, is that A.vulgare serves as a decomposer that aids in cycling of nutrients (add link to nutrient cycle) within an ecosystem. A.vulgure can also play a different role in the cycling of nutrients in an ecosystem as prey. In addition to the predator/prey relationship formed between A. vulgare and other species, the organism has commonly been found to be a host to parasites known as Plagiorhynchus cylindraceus (Nickol and Dappen 1982). P.cylindraceus also has a parasitic relationship with a variety of different birds, including the robin.

Serial Killers Bernard Spilsbury Sir Bernard Henry Spilsbury (16 May 1877 – 17 December 1947) was a British pathologist. His cases include Hawley Harvey Crippen, the Seddon case and Major Armstrong poisonings, the "Brides in the Bath" murders by George Joseph Smith, Louis Voisin, Jean-Pierre Vaquier, the Crumbles murders, Norman Thorne, Donald Merrett, the Podmore case, the Sidney Harry Fox matricide, Alfred Rouse, Elvira Barney, Tony Mancini and the Vera Page case. He also played a crucial role in the development of Operation Mincemeat, a deception operation during World War II which saved thousands of lives of Allied service personnel. Personal life[edit] Spilsbury was born on 16 May 1877 at 35 Bath Street, Leamington Spa, Warwickshire. On 3 September 1908, Spilsbury married Edith Caroline Horton. The deaths (of Peter, in particular) were a blow from which Spilsbury never truly recovered. Career[edit] Important cases[edit] Scar tissue used in evidence at the Crippen trial, alleged to be that of Cora Crippen. Legacy[edit]