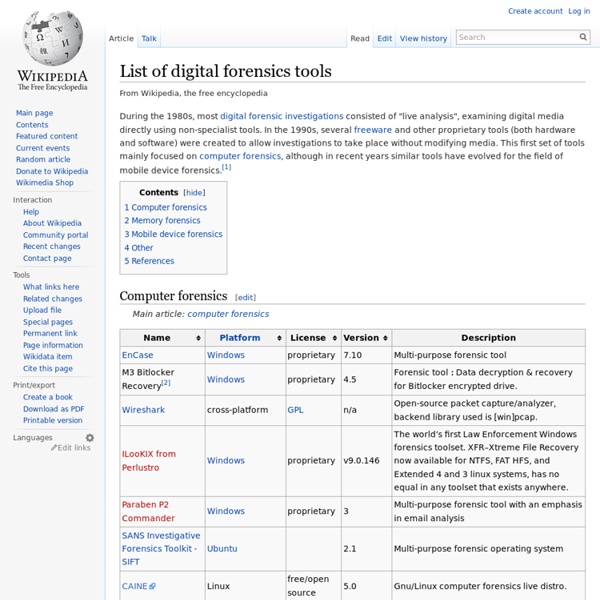 During the 1980s, most digital forensic investigations consisted of "live analysis", examining digital media directly using non-specialist tools. In the 1990s, several freeware and other proprietary tools (both hardware and software) were created to allow investigations to take place without modifying media. This first set of tools mainly focused on computer forensics, although in recent years similar tools have evolved for the field of mobile device forensics.[1] Computer forensics[edit] Memory forensics[edit] Memory forensics tools are used to acquire and/or analyze a computer's volatile memory (RAM). Mobile device forensics[edit] Mobile forensics tools tend to consist of both a hardware and software component. Other[edit] References[edit]

Forensic Tools Listings Pyext The ext3 or third extended filesystem is a journaled file system that is commonly used by the Linux kernel. It is the default file system for many popular Linux distributions. Stephen Tweedie first revealed that he was working on extending ext2 in Journaling the Linux ext2fs Filesystem in a 1998 paper and later in a February 1999 kernel mailing list posting, and the filesystem was merged with the mainline Linux kernel in November 2001 from 2.4.15 onward. This project is mainly to read EXT2/3 information.

Book Review: Digital Forensics with Open Source Tools With more forensic books hitting the shelves, I find myself prioritizing those by authors I know and trust. I have worked with Cory Altheide and he is an extremely talented forensic professional with a passion for open source tools. Not surprisingly, I would not categorize this as a beginner book. Open source tools require a higher level of interaction than their commercial counterparts, but are a great way to take your forensic skills to the next level. While teaching, I often see students frustrated that there is no one tool that can do it all. Such a tool does not exist, no matter how much you are able to pay for it.

Bloodstain Tutorial The success or failure of any criminal investigation often depends on the recognition of physical evidence left at a crime scene and the proper analysis of that evidence. Crime scenes that involve bloodshed often contain a wealth of information in the form of bloodstains. The pattern, size, shape, and the location of such stains may be very useful in the reconstruction of the events that occurred. William G. ECKERT and Stuart H. JAMES

Tech Insight: Making The Most Of Open-Source Forensics Tools Emerging offerings can turn network forensics into a low-cost, do-it-yourself security project A Special Analysis for Dark Reading Network forensic solutions come in many different shapes, sizes, and price ranges, but in the end they all have the same goal: recording activity on the network. As IT budgets tighten with the economy, it might be time for your organization to take a closer look at a do-it-yourself approach to forensics that leverages free and open-source tools. While your CFO might love the price of these tools, it may be difficult to "sell" them to your IT management. Most IT executives want someone to point a finger at when a product breaks, and many want 24x7 support.

The man who cleans up blood after murders Image copyright Bénédicte Desrus / Alamy Mexico has one of the highest murder rates in the world, but who cleans up the blood at the crime scene when the police and investigators have left? Donovan Tavera is Mexico's first forensic cleaner. As he explains here, his fascination with blood began as a young boy. What happens to the blood after a murder? Netherlands Forensic Institute develops and publishes open source software The Netherlands Forensic Institute (NFI) recently published its own software, TULP2G, under an open source license. The NFI had already published a software library called Rfile as open source software. The software that was developed by the NFI can now be used and developed further by other organizations.

decomposition FACTS: WHAT HAPPENS TO A BODY AFTER DEATH (WARNING - Not for the squeamish) UPON DEATH Nature is very efficient at breaking down human corpses. When you die your heart stops pumping blood around your body, thus depriving your cells of oxygen, which rapidly begin to die. 50 Essential Open Source Security Tools - Anti-Everything, Encryption, Secure Delete, Forensics - Roundup Anti-Everything, Encryption, Secure Delete, Forensics November 11, 2008 By Cynthia Harvey The area of open source security software is growing rapidly, with a cornucopia of apps for every use: anti-spam, firewalls, forensics, encryption, log monitoring, passwords – the list is growing even as you read this. In many cases, these open source security tools – many of which are free – are available for the Windows, Linux and Mac operating systems. Let the downloading begin…

Taphonomy: What Happens To Bones After Burial? Last week I discussed a way of preserving bodies almost indefinitely in some cases: embalming. On the other side of this is decay, the process of bodily decline and biological breakdown of the flesh. If you’ve ever watched any of the forensics crime shows, you know that understanding decay and changes in the body can be a key factor in determining when the individual died and how the body was treated after death. But its also important for archaeologists dealing with remains that are ancient.

How to Visualize Investigations In security and investigations, the phrase "A picture is worth a thousand words" usually refers to CCTV footage or some evidence that proves a subject's guilt (or innocence). Unfortunately most corporate investigations rarely even touch upon cases with a lot of visual content, which can become rather large collections of three ring binders. While we all hope to present a smoking gun for our final report, sometimes presenting our case to law enforcement, lawyers, human resources and even our own management without the proper visual can keep even a solid case from closing. Like children's books full of images deeply expanding short story lines into memorable tales, visualization can be an effective way to quickly and successfully present your investigation on a high level. Below are simple ways to transform even your most complex investigation into a storytelling flowchart.

Free Resources for Law Enforcement These are the most recent notes for my "Free Stuff" presentation. This most recent presentation was from the IACA conference in September 2013. I hope that everyone who came to my presentation can save more than was spent on their conference tuition and expenses. The Prezi to go long with this can be found here: I Need A Relationship Mapping Tool I was asking for better ways to track PC/NPC relationships in my game on RPG Stack Exchange and Brian brought up the free game Minimus, which is basically an example of social network mapping for an RPG. This reminded me of the person-to-person tracking diagrams I’ve seen in books on intelligence work, it’s a common HUMINT technique. But then I started looking for good tools to do it and started coming up short.. There’s super complicated open source BS like graphviz – not something I want to deal with as part of my hobby. “Do it in R,” suggested someone who clearly wanted a punch in the nose.