WorldCup. A World Cup of Knowledge! 18+ Resources & Activities. “Soccer isn’t the same as Bach or Buddhism. 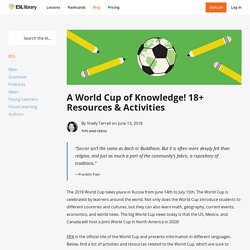 But it is often more deeply felt than religion, and just as much a part of the community’s fabric, a repository of traditions.” —Franklin Foer. A World Cup of Knowledge! Teach the World Cup. 2018 FIFA World Cup Russia™ - FIFA.com. World Cup Lesson Ideas, Resources, & Apps. Football Commentator Bingo Card. ESPN's new World Cup ad is perfect. Soccer Fever: Learning About the World Cup in Brazil. Slide Show The Beautiful (Street) Game Updated | May 27, 2014 Every four years the world’s obsession with soccer descends upon a single country for a month-long global championship, the World Cup. 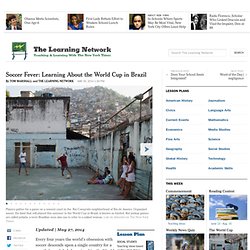 This year’s tournament promises an extra measure of intensity because of its location: Brazil. Few countries can claim its level of passion for the game or its expertise, with a record five wins. 2014 FIFA World Cup™ - Official Emblem. © FIFA.com From the second it starts until its final dramatic moments, each FIFA World Cup™ is encapsulated by its own specific identity, a unique image that is projected around the world. 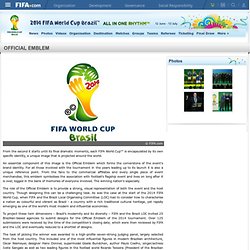 An essential component of this image is the Official Emblem which forms the cornerstone of the event’s brand identity. For all those involved with the tournament in the years leading up to its launch it is also a unique reference point. From the fans to the commercial affiliates and every single piece of event merchandise, this emblem symbolises the association with football’s flagship event and lives on long after it is over, logged in the bank of memories of everyone involved.

Everything You Need to Know About the World Cup - Presentation Software that Inspires. 2014 FIFA World Cup Brazil™ - Games. FIFA World Cup - Silk. With time running out, Brazil struggles with its World Cup preparations. SAO PAULO, Brazil — Although expectations are high for Brazil’s football team at the World Cup, it’s already clear the country didn’t do a very good job preparing for the tournament. 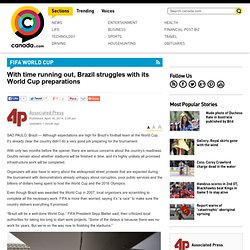 With only two months before the opener, there are serious concerns about the country’s readiness. Doubts remain about whether stadiums will be finished in time, and it’s highly unlikely all promised infrastructure work will be completed. Organizers will also have to worry about the widespread street protests that are expected during the tournament with demonstrators already unhappy about corruption, poor public services and the billions of dollars being spent to host the World Cup and the 2016 Olympics. Even though Brazil was awarded the World Cup in 2007, local organizers are scrambling to complete all the necessary work. FIFA is more than worried, saying it’s “a race” to make sure the country delivers everything it promised. “It’s a lesson and definitely we will act differently,” Valcke said. 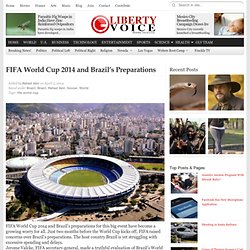 Just two months before the World Cup kicks off, FIFA raised concerns over Brazil’s preparations. The host country Brazil is yet struggling with excessive spending and delays. Jerome Valcke, FIFA secretary-general, made a truthful evaluation of Brazil’s World Cup arrangements last week.”If you want me to summarize, we are not ready,” he told at an African Football conference in South Africa. Preparations for the World Cup have been beset by problems. Two stadiums are incomplete–one in Porto Alegre and the other in São Paulo.Three construction deaths have delayed the work at the Itaquerão in São Paulo. That took the number of fatalities at the site to three after two people killed in November following a partial crane collapse of the stadium at the Corinthians Arena. UCL Final Munich 2012. 2014 FIFA World Cup Brazil™ Team Previews. Giovani dos Santos competing against France in the world. 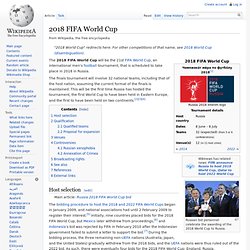 The 2018 FIFA World Cup will be the 21st FIFA World Cup, an international men's football tournament, that is scheduled to take place in 2018 in Russia. The finals tournament will involve 32 national teams, including that of the host nation, assuming the current format of the finals is maintained. This will be the first time Russia has hosted the tournament, the first World Cup to have been held in Eastern Europe, and the first to have been held on two continents.[2][3][4] Host selection[edit] The twenty-two-member FIFA Executive Committee convened in Zürich on 2 December 2010 to vote to select the hosts of both tournaments.[8] Russia won the right to be the 2018 host in the second round of voting. The voting patterns were as follows:[10] Qualification[edit] We Are One (Ole Ola) [The Official 2014 FIFA World Cup Song] (Olodum Mix)

The matches of the 2014 FIFA World Cup Brazil™ Famous People English Lessons: Biographies and ESL Lesson Plans. World cup. Pearls of wisdom from some soccer greats… “I definitely want Brooklyn to be christened, but I don’t know into what religion yet.” 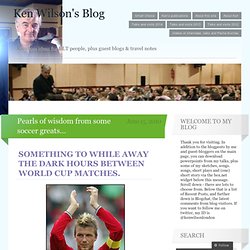 David Beckham “I wouldn’t be bothered if we lost every game as long as we won the league.” Mark Viduka “Alex Ferguson is the best manager I’ve ever had at this level. Well, he’s the only manager I’ve actually had at this level. Neville Southall, the scruffiest goalkeeper ever “If you don’t believe you can win, there is no point in getting out of bed at the end of the day.” “I’ve had 14 bookings this season – 8 of which were my fault, but 7 of which were disputable.” “I’ve never wanted to leave.

“I’d like to play for an Italian club, like Barcelona.” World Cup Lesson Ideas. Jun June 14, 2010 | 3 Comments Well, partly because I have classes with no football enthusiasm and as schools close this Friday, I can’t do any World Cup themed lessons with my students. 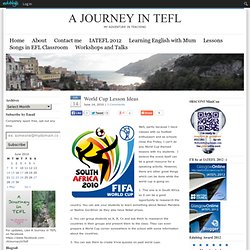 I believe the event itself can be a great resource for a speaking activity. However, there are other great things which can be done while the world cup is going on. 1. Sports. All Superbowl Ads 2011 "72 TV commercials were aired during the Super Bowl 2011. 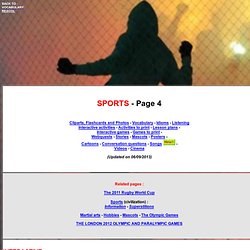 While some of these were the trailers of upcoming movies, others were funny super bowl commercials which left the audience in splits. The Super Bowl 2011 advertisements list was dominated by commercials of cars and alcoholic beverages.... "(creativecriminals.com) Green Bay edge out Pittsburgh 31-25 "Green Bay won their fourth Super Bowl with a thrilling 31-25 win over Pittsburgh in Texas. " (BBC) The 10 Funniest Super Bowl Commercials (oddee.com) Super Bowl Ads Generating Super Buzz - Newsy video "Part of a new wave of marketing strategies, this year's Super Bowl ads are targeting social media audiences. View transcript >> " (jeffreyhill.typepad.com) Super Bowl dreams "Players around world speak of love for the game... The World Cup. 25 FREE World Cup Worksheets and Lesson Plans. Why it Makes Sense to Teach the World Cup. The World Cup - English Vocabulary, Quizzes and Worksheets.

World Cup Soccer. ARSoccer - Augmented Reality Soccer Game. The Best Sites For Learning About The 2014 World Cup In Brazil. I’ve published two posts at The New York Times for English Language Learners that focus on soccer: one on Lionel Messi and the other on a Mexican girls soccer team. 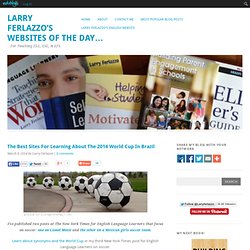 Learn about synonyms and the World Cup in my third New York Times post for English Language Learners on soccer. The 2014 World Cup begins on June 12th in Brazil. I created a very long “Best” list for the 2010 World Cup, and have selected sites that would be useful this year and added them to this new list. Of course, I’ll be adding a lot more as time goes on, and I hope that readers will contribute many. You might also be interested in The Best Sites For Learning About Brazil.