A Catholic History of the Fake Conflict Between Science and Religion. Introduction The conflict model of science and religion says that scientific inquiry and religious faith (especially Catholicism) have been intractably opposed to each other throughout history. 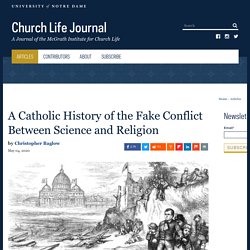 According to it, there is no possibility of harmony between science and faith, because they are rival ways of explaining the universe, with the proponents of each fighting each other in a zero-sum game. This is a deeply rooted assumption in the minds of many Americans, and recent research reveals that the perspective of many young Catholics in America today is shaped by it—as many as 70% of Catholic emerging adults, according to sociologist Christian Smith. We will examine the origin of the conflict model in the United States, including the historical context and the specific persons and events that gave rise to it. This will give some insight into why these ideas, though false, were found so persuasive when first proposed and achieved the enormous influence that persists to this day.

Whereas St. How to make room for science in your faith: A guide for Catholics. Particles of Faith: A Catholic Guide to Navigating Science by Stacy A. 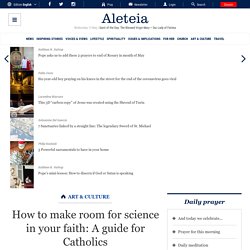 Trasancos was released in 2016. It was greeted, deservedly, with a flurry of positive reviews when it appeared and deserves a revisit. She takes up three themes: 1. She denies in the book having ever been an atheist, and says it is incorrect to say she is an “atheist-to-Catholic” convert. Modern Science is Built on a Christian Foundation. Msgr. 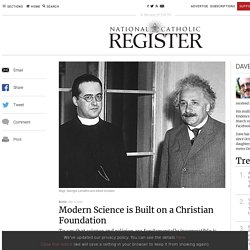 Georges Lemaître and Albert Einstein To say that science and religion are fundamentally incompatible is historically ignorant. Authors explore where faith and science meet. Published 2/21/2020. Books. These are the covers of "In the Beginning: A Catholic Scientist Explains How God Made Earth Our Home" by Gerard Verschuuren and "Faith and Science at Notre Dame: John Zahm, Evolution and the Catholic Church" by John P. 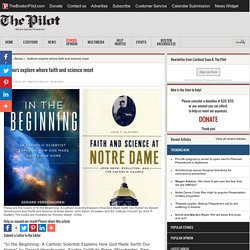 Slattery. The books are reviewed by Timothy Walch. (CNS) "In the Beginning: A Catholic Scientist Explains How God Made Earth Our Home" by Gerard Verschuuren. Sophia Institute Press (Manchester, New Hampshire, 2019). 192 pp., $18.95. Where Did We Get the Myth That Faith and Science Are At Odds? Anyone with a firm understanding of history and the proper natures of the disciplines of science and theology will see right through the myths and fictions of the warfare model. 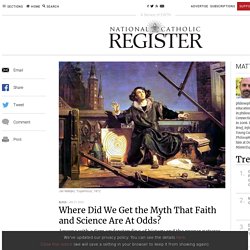 At the end of the 1800s, an insidious fiction was invented. Unfortunately, this fable took root in the hearts and minds of the American public, and it has grown to a point where it casts its shadow on the whole ground of religion, especially Christianity in general and Catholicism in particular. This false framework is known today as the warfare model or the conflict thesis between religion and science; it posits that the intellectual relationship between the fields of science and religion is one of inherent warfare, and these two endeavors have been in a fight to the death since the time they met.

They bear one another an intrinsic opposition. The Broomstick Hoax and the Truth About Galileo. The idea that the Catholic Church and science are at war is nonsense. 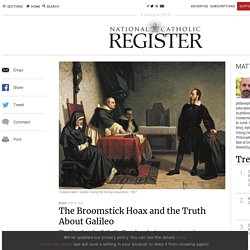 Students came into my high school class on Monday claiming that it was the only day a broom would stand on its own because of the moon’s position. Since I am their physics teacher, they thought they should let me know about the phenomenon they had discovered and the proof that was flooding social media. Alister McGrath: Both Science and Stories Declare God’s Glory. The relationship between Christianity and science is hotly debated, and both believers and skeptics have appealed to Albert Einstein to buttress their positions. 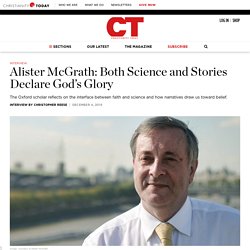 Believers point to Einstein’s many references to God while skeptics note his rejection of revealed religion. Alister McGrath, Andreas Idreos Professor of Science and Religion at Oxford University, has written a new book on the famous physicist, A Theory of Everything (That Matters): A Brief Guide to Einstein, Relativity, and His Surprising Thoughts on God (Tyndale). McGrath also recently published Narrative Apologetics: Sharing the Relevance, Joy, and Wonder of the Christian Faith (Baker), in which he argues that stories are an important but often overlooked resource for commending Christianity. In both books, he contends that the Christian faith has a better story to tell than secular alternatives and offers great explanatory power. 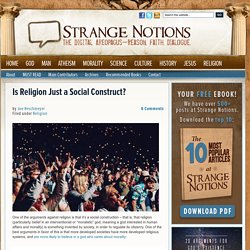 One of the arguments against religion is that it’s a social construction – that is, that religion (particularly, belief in an interventionist or “moralistic” god, meaning a god interested in human affairs and morality) is something invented by society, in order to regulate its citizenry. Richard Dawkins: Best arguments against religion/faith #1. Alister McGrath on Richard Dawkins. Should We Believe Only What Can Be Scientifically Proven? Intelligent Faith Ep 1. Beyond Belief, The origins of the universe. 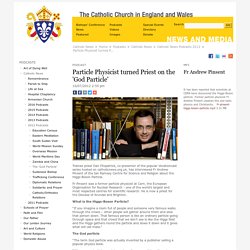 Fr Pinsent was a former particle physicist at Cern, the European Organisation for Nuclear Research - one of the world’s largest and most respected centres for scientific research. Does Science Eliminate God? God vs. Science, Richard Dawkins and Francis Collins interviewed by D. Cray. There are two great debates under the broad heading of Science vs. 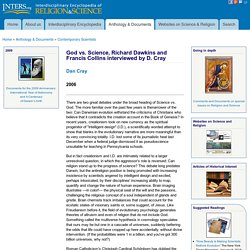 God. The more familiar over the past few years is thenarrower of the two: Can Darwinian evolution withstand the criticisms of Christians who believe that it contradicts the creation account in the Book of Genesis? In recent years, creationism took on new currency as the spiritual progenitor of "intelligent design" (I.D.), a scientifically worded attempt to show that blanks in the evolutionary narrative are more meaningful than its very convincing totality. I.D. lost some of its journalistic heat last December when a federal judge dismissed it as pseudoscience unsuitable for teaching in Pennsylvania schools. Questioning Truth, Reality and the Role of Science. RE Today Services. Science & Belief. Science and Belief Teachers Notes. Science And Religion. Design and evolution. Darwin vs God: did the 'Origin of Species' cause a clash between church and science? - History Extra. On 12 February 1809, Charles Darwin, the bearded Victorian sage on the ten pound note, was born.

Many people believe he was the man who discovered we come from monkeys. Yet he did no such thing. Writers before Darwin had made connections between humans and apes and monkeys because of our obvious physical similarities. But the theory for which Darwin is so celebrated was not aimed particularly at human ancestry at all. How far will atheists go to deny the Christian birth of science? – Catholic World Report.

In a recent critical essay, Richard Carrier, a world-renowned author and speaker, professional historian with a Ph.D. from Columbia University in ancient history, and prominent defender of the American freethought movement, has taken issue with my use of the phrase “stillbirth of science” in ancient Greece. Several years ago, I wrote a series of essays on the stillbirths in an effort to pass on the teaching of the late Fr. Stanley L. Jaki, who coined the phrase. “Stillbirth” describes ancient cultures that came close to a birth of science but failed to produce science as a universal, systematic, and self-sustaining discipline of physical laws.

7 of History's Most Brilliant Scientists People Forget Were Catholic. The next time someone accuses the Church of discouraging intellectual exploration that could benefit humanity, one would do well to bring the following thinkers to bear upon the discussion: 1) Louis Pasteur – Inventor of Pasteurization Louis Pasteur, inventor of the process pasteurization (one of the biggest breakthroughs ever for preventing disease), was once praying the Rosary on a train when a young man criticized his devotion as a manifestation of scientific ignorance. Pasteur simply had to introduce himself to dispel this spurious charge of superstition. Does Religion Make Bad Scientists? 1. No: Counter examples to this thesis include Scientifically speaking, that proves the case conclusively. There is no need to say more. Nevertheless there are aspects of the issue that deserve further investigation. 2. There is no serious case for `creation science’ and little for `intelligent design’, and I’m not interested in defending them.

Br Guy Consolmagno by St John's and St Mary Magdalene's. Georges-lemaitre-priest-universe-expanding-big-bang-hubble-space-cosmic-egg-astronomer-physics-a8449926. The First Woman to Earn a PhD in Computer Science Was a Nun. The battle for gay rights was being fought, slowly but surely, for decades before marriage equality became law in the United States in 2015. Generations of lesbian, gay, bisexual, and transgender activists paved the way for the progress we see today.

From politicians to TV stars, here are 11 trailblazers worth knowing. Cindy Ord, Getty Images for OUT100 presented by Buick. Science has next to nothing to say about moral intuitions. For centuries, philosophers have been using moral intuitions to reason about ethics. Today, some scientists think they’ve found a way to use psychology and neuroscience to undermine many of these intuitions and advance better moral arguments of their own.

If these scientists are right, philosophers need to leave the armchair and head to the lab – or go into retirement. The thing is, they’re wrong. Darwin vs God: did the 'Origin of Species' cause a clash between church and science? - History Extra. Tutor2u Religious Studies. Darwin vs Dawkins is a phenomenon of our… Would you Adam and Eve it? Why creation story is at heart of a new spiritual divide. Religion isn’t the enemy of science: it’s been inspiring scientists for centuries. Philosophy Bites Back: Has physics made philosophy obsolete? 7 of History's Most Brilliant Scientists People Forget Were Catholic. Scientism's Threat To Philosophy - Daily Nous.