Secret Project Created Weaponized Ebola in South Africa in the 1980s. Old-Thinker News | October 20, 2014 By Daniel Taylor “No records are available to confirm that the biological agents were destroyed.” 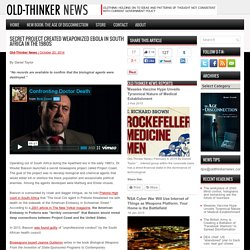 Operating out of South Africa during the Apartheid era in the early 1980’s, Dr. Wouter Basson launched a secret bioweapons project called Project Coast. The goal of the project was to develop biological and chemical agents that would either kill or sterilize the black population and assassinate political enemies. Basson is surrounded by cloak and dagger intrigue, as he told Pretoria High court in South Africa that “The local CIA agent in Pretoria threatened me with death on the sidewalk of the American Embassy in Schoeman Street.” In 2013, Basson was found guilty of “unprofessional conduct” by the South African health council. What Does The Globalist Agenda / New World Order Plan Mean For New Zealanders? [and the rest of the world]

October 19 2014 | From: Zengardner / Youtube / Whitewraithe / TVNZ / PaulCraigRoberts It looks like we’re going to be saddled with this ebola roll-out for a while. 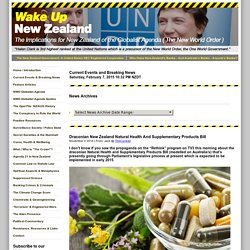 It seems to be working according to plan as the public jumps on the fear bandwagon and all kinds of media reports are taken at face value regarding what’s going on. A very easy environment to manipulate public sentiment, emotions and responses which is their favorite milieu. The old problem – reaction – solution game. The Ebola covert op. Ebola Transmittable by Air - USAMRID Study. Ebola Transmittable by Air - CIDRAP. CIDRAP is warning that surgical facemasks do not prevent transmission of Ebola, and healthcare professionals (HCP) must immediately be outfitted with full-hooded protective gear and powered air-purifying respirators. 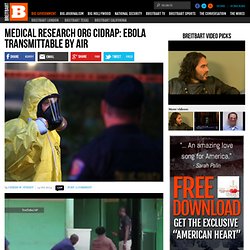 CIDRAP since 2001 has been a global leader in addressing public health preparedness regarding emerging infectious diseases and bio-security responses. CIDRAP’s opinion on Ebola virus is there are “No proven pre- or post-exposure treatment modalities;” “A high case-fatality rate;” and “Unclear modes of transmission.” In April of 2014, CIDRAP published a commentary on Middle East respiratory syndrome (MERS) that confirmed the disease “could be an aerosol-transmissible disease, especially in healthcare settings,” similar to the known aerosol transmission capability of severe acute respiratory syndrome (SARS). CDC’s published “Infection Prevention and Control Recommendations for Hospitalized Patients with Known or Suspected Ebola Virus Disease in U.S. A Characterization of Aerosolized Sudan Virus Infection in African Green Monkeys, Cynomolgus Macaques, and Rhesus Macaques. Challenges, Progress, and Opportunities: Proceedings of the Filovirus Medical Countermeasures Workshop. Lethal experimental infections of rhesus monkeys by aerosolized Ebola virus. 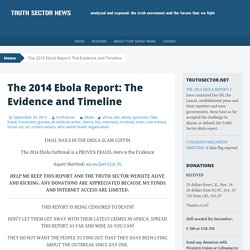 Those who lived, would not have done so without simple H2O combined with the rehydration solution.” – Financial Times, October 13, 2014 UPDATE 38. Dec. 3, 2014 EbolaGate 2014: Ebola Toll Lowered by 1,000 After Liberian Counting ‘Error’ UPDATE 37. Big Pharma Seeks Diplomatic Immunity for Use of Ebola Vaccines UPDATE 36. Emergency Manager Calls Federal Ebola Response a Stand Down. Feds are avoiding their own disease protocols, says emergency responder Kit Daniels Prison Planet.com October 6, 2014 The numerous violations of disease protocol surrounding the Dallas, Texas Ebola case are intentional, according to an emergency response manager. 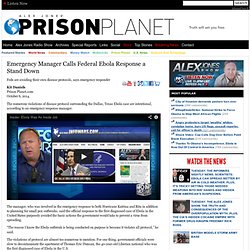 The manager, who was involved in the emergency response to both Hurricane Katrina and Rita in addition to planning for small pox outbreaks, said the official response to the first diagnosed case of Ebola in the United States purposely avoided the basic actions the government would take to prevent a virus from spreading. CNN Reporter Returning from Liberia ‘Horrified’ by Lack of Airport Ebola Screening. “I expected that they were going to take my temperature… ask me lots of questions, but they didn’t” Mikael Thalen Prison Planet.com October 6, 2014 A CNN reporter returning from Liberia says she was “shocked” by the complete lack of screening at the Atlanta airport. 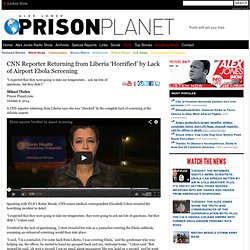 Speaking with HLN’s Robin Meade, CNN senior medical correspondent Elizabeth Cohen revealed the horrifying incident in detail. “I expected that they were going to take my temperature, they were going to ask me lots of questions, but they didn’t,” Cohen said. Troubled by the lack of questioning, Cohen revealed her role as a journalist covering the Ebola outbreak, assuming an enhanced screening would then take place. “I said, ‘I’m a journalist, I’ve come back from Liberia, I was covering Ebola,’ and the gentleman who was helping me, the officer, he started to hand my passport back and say, ‘welcome home,’” Cohen said. Another Foreign News Outlet Links U.S. Bio-Warfare Labs to Ebola Outbreak. 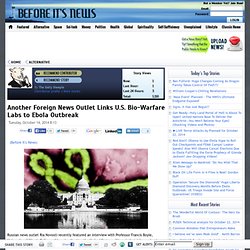 Via Ria Novosti: “US government agencies have a long history of carrying out allegedly defensive biological warfare research at labs in Liberia and Sierra Leone. A Way To Stop Ebola Discovered!