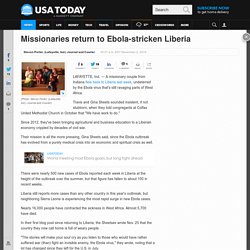 Travis and Gina Sheets sounded insistent, if not stubborn, when they told congregants at Colfax United Methodist Church in October that "We have work to do. " Since 2012, they've been bringing agricultural and business education to a Liberian economy crippled by decades of civil war. Their mission is all the more pressing, Gina Sheets said, since the Ebola outbreak has evolved from a purely medical crisis into an economic and spiritual crisis as well.

There were nearly 500 new cases of Ebola reported each week in Liberia at the height of the outbreak over the summer, but that figure has fallen to about 100 in recent weeks. Liberia still reports more cases than any other country in this year's outbreak, but neighboring Sierra Leone is experiencing the most rapid surge in new Ebola cases. Liberian Senatorial Elections Defy Ebola. They unleashed a hail of bullets to rival the final scene in ‘Bonnie and Clyde.’ 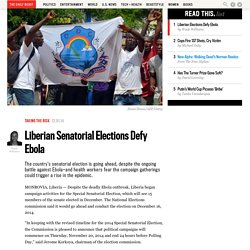 But the man and women killed in 2012 were unarmed—and now these cops are claiming racial discrimination. Nine of the 13 Cleveland cops who fired 137 shots at two apparently unarmed black civilians following a high-speed chase in 2012 have filed a federal lawsuit saying they are victims of racial discrimination. Really. Eight of the aggrieved cops are white.

The ninth is Hispanic. As if their race was the deciding factor in the cops being kept on restricted duty for 16 months after a backfire mistaken for a gunshot and an ensuing cross-town chase led to police firing nearly as many shots at the unarmed Melissa Williams and Timothy Russell as were unleashed upon Bonnie and Clyde in their famous final shootout—leaving Melissa with 24 gunshot wounds to Bonnie’s 23 and Timothy with 23 to Clyde’s 25. The Cleveland Nine should count themselves lucky that they were returned to full duty after 16 months. North Korea says U.S. created the Ebola outbreak. A North Korean flag flutters in the propaganda village of Gijungdong as seen from a South Korean military check point of the truce village of Panmunjom in the Demilitarized Zone dividing the two Koreas on November 12, 2014. 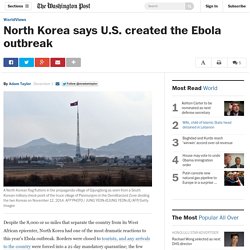 AFP PHOTO / JUNG YEON-JEJUNG YEON-JE/AFP/Getty Images Despite the 8,000 or so miles that separate the country from its West African epicenter, North Korea had one of the most dramatic reactions to this year's Ebola outbreak. Borders were closed to tourists, and any arrivals to the country were forced into a 21-day mandatory quarantine; the few North Korean citizens who were allowed to leave had that privilege rescinded. Now, North Korea may have revealed the logic behind the panic: Top Pyongyang officials appear to believe that this Ebola outbreak began as a biological weapon created by the United States.

Boyle, a law professor, has said that he believes the latest strain of Ebola is man-made and must have escaped from a U.S. White House Claims Progress in Ebola Fight. The White House says the Obama administration is making strides in the fight against Ebola, citing an expanded hospital network and testing capacity at home and gains confronting the deadly disease in West Africa. 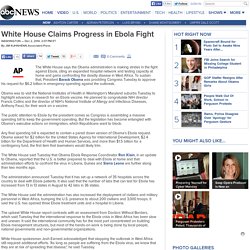 To sustain that, President Barack Obama was prodding Congress Tuesday to approve his request for $6.2 billion in emergency spending against the outbreak. Obama was to visit the National Institutes of Health in Washington's Maryland suburbs Tuesday to highlight advances in research for an Ebola vaccine. He planned to congratulate NIH director Francis Collins and the director of NIH's National Institute of Allergy and Infectious Diseases, Anthony Fauci, for their work on a vaccine. Doctors Without Borders: Ebola Response Still Too ‘Slow and Uneven’ Sierra Leone Doctor Who Got Ebola Is Not Relenting. For eight weeks, Dr. 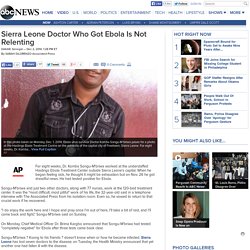 Komba Songu-M'briwa worked at the understaffed Hastings Ebola Treatment Center outside Sierra Leone's capital. When he began feeling sick, he thought it might be exhaustion but on Nov. 26 he got dreadful news: He had tested positive for Ebola. Songu-M'briwa and just two other doctors, along with 77 nurses, work at the 120-bed treatment center. It was the "most difficult, most pitiful" work of his life, the 32-year-old said in a telephone interview with The Associated Press from his isolation room. Even so, he vowed to return to that crucial work if he recovered. "I do enjoy the work here and I hope and pray once I'm out of here, I'll take a bit of rest, and I'll come back and fight," Songu-M'briwa said on Sunday. On Monday, Chief Medical Officer Dr. Songu-M'briwa ?

The country had only about 135 doctors to begin with, serving 6 million people. "We're stretched out, three of us cannot do all the work here," he said.