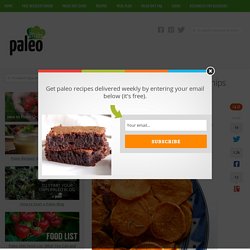 It’s a Paleo-friendly game day snack! What?! Yes, indeed. These would be perfect for a Sunday afternoon watching football. Salty, crispy, and great served with some Paleo ketchup. The chips are simple to make, and don’t take as long in the oven as some other homemade chips – only 15-20 minutes. You simply toss the sliced sweet potatoes with melted coconut oil and any seasonings of your choice. Next you spread the chips out in a single layer. I can’t believe I haven’t tried these sweet potato chips before. Baked Sweet Potato Chips 2 large sweet potatoes 2 tbsp melted coconut oil 2 tsp dried rosemary 1 tsp sea salt Preheat oven to 375 degrees F. By Rebecca Bohl (PaleoGrubs.com) Paleo Grubs P.S. . + Watch our FREE presentation on the 5 foods that kill fat and naturally purge toxins from your body. — Rebecca Bohl.

Spinach Chips Are the New Kale Chips - Best Healthy Snacks. Baked kale chips are all the rage now, but since women can't live on kale alone, give these spinach chips a try. 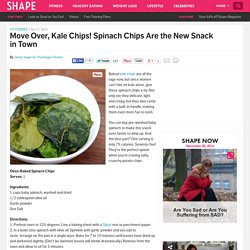 Not only are they delicate, light, and crispy, but they also come with a built-in handle, making them even more fun to nosh. You can buy pre-washed baby spinach to make this snack even faster to whip up. And the best part? One serving is only 75 calories. Seventy-five! Oven-Baked Spinach ChipsServes: 1 Ingredients:1 cups baby spinach, washed and dried1/2 tablespoon olive oilGarlic powderSea Salt Directions:1. Nutrition score per serving: 75 calories, 7g fat, 2g carbs, 2g protein, 1g fiber. A Better Snack: Acorn Squash Chips. Warming Shiitake Soba (Vegan & Gluten-Free) If you're looking for a vegan soup that is also wheat-free, look no further. 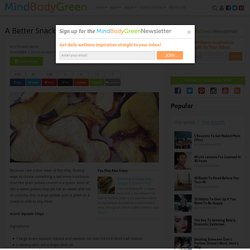 Soba is the Japanese name for buckwheat. Buckwheat is technically a seed, not a grain, which makes it wheat- and Read Because I am a true lover of the chip, finding ways to create something a tad more nutritious than the plain potato crunch is a quest. Kind of like a sweet potato chip yet not as sweet and not as crunchy, this orange-yellow yum is great as a snack or side to any meal. Apple Chips - A Zesty Bite. Chips made out of an apple? 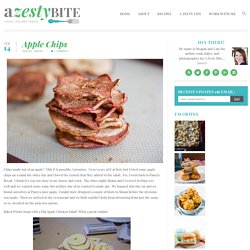 Ohh it is possible, I promise. I was weary of it at first, but I tried some apple chips on a salad the other day and I loved the crunch that they added to the salad. Yes, I went back to Panera Bread. I think it’s way too close to my house and work. The other night Shaun and I weren’t feeling very well and we wanted some soup, but neither one of us wanted to make any. Baked Potato Soup with a Fuji Apple Chicken Salad! I was mentioning to Shaun about making some apple chips and he proceeds to tell me he loves them. Apple ChipsYield: 2 servingsWW Pts: 2 Ingredients: 2 red apples 1 1/2 tsp ground cinnamon 1/4 tsp sugar Preparation: Preheat oven to 200 degrees. Cook for 1 hour and then flip the apples and cook for an additional 30 minutes to an hour or until chips have lost most of their moisture. *Cooking time may vary depending on the thickness of the apple slices* The Wimpy Vegetarian. Healthy, delicious snack of spicy kale leaves baked until crisp. 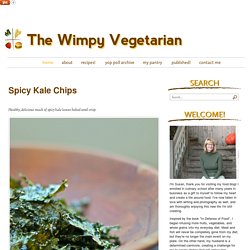 I hit a carb wall over the weekend. Not that I don’t love all the cake, cookies, candy, and scones I’ve been gorging on mind you. I can make a breakfast out of a swirl of warm cinnamon rolls draped with icing as eagerly as Paula Deen. But after a long weekend of traveling back east for a beautiful family wedding, I found myself thinking about kale chips somewhere between grab-n-go airport food that satisfied my hunger and little else, and my second indulgent helping of wedding cake capped with a thick layer of fluffy frosting. I don’t think I’m alone. Kale is grown year-round but it’s at its best in the winter, which is just the opposite from what you might think. Cook’s Notes: