20 Tricks to Stay Slim Without Thinking About It. Forget counting calories. 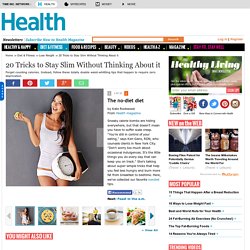 Instead, follow these totally doable waist-whittling tips that happen to require zero deprivation. by Kate Rockwood From Health magazine Sneaky calorie bombs are hiding everywhere, but that doesn't mean you have to suffer scale creep. "You're still in control of your eating," says Keri Gans, RDN, who counsels clients in New York City.

"Don't worry too much about occasional indulgences. Next: Feast in the a.m. » View All Get the latest health, fitness, anti-aging, and nutrition news, plus special offers, insights and updates from Health.com! 5 Tricks to Stop Procrastinating for Good. Getty Images I meant to write this piece two weeks ago. 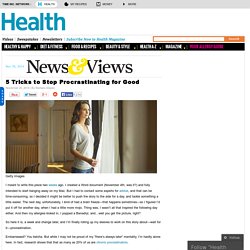 I created a Word document (November 4th, was it?) And fully intended to start banging away on my Mac. But I had to contact some experts for advice, and that can be time-consuming, so I decided it might be better to push the story to the side for a day, and tackle something a little easier. The Difference Between American and British Humour. Black and Blue - The New Yorker. To his fans, Louis C.K. is more than just an artist. 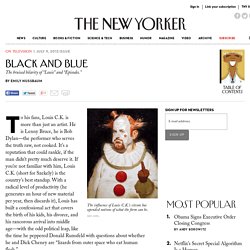 He is Lenny Bruce, he is Bob Dylan—the performer who serves the truth raw, not cooked. It’s a reputation that could rankle, if the man didn’t pretty much deserve it. If you’re not familiar with him, Louis C.K. (short for Szekely) is the country’s best standup. With a radical level of productivity (he generates an hour of new material per year, then discards it), Louis has built a confessional act that covers the birth of his kids, his divorce, and his rancorous arrival into middle age—with the odd political leap, like the time he peppered Donald Rumsfeld with questions about whether he and Dick Cheney are “lizards from outer space who eat human flesh.” Newyorker. Germany: College is free there, even for foreign students. Why? 10 Job Skills You'll Need in 2020. 4 Ways to Become the Best Mentee. I’m a mentor junkie. 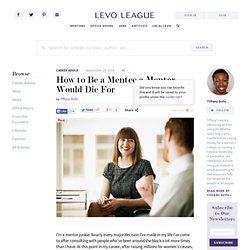 Nearly every major decision I’ve made in my life I’ve come to after consulting with people who’ve been around the block a lot more times than I have. At this point in my career, after raising millions for women’s causes, running a national nonprofit, working at Levo, doing lots of public speaking, and now writing a book, I feel that I’m simply the cumulative investment of a lot of generous people.

Part of how I express my gratitude to them is by paying it forward and mentoring others. But with multiple mentorship requests each week and only 24 hours in a day, I’ve had to get savvy at deciding who to say yes to. Here are the top 4 qualities my favorite mentees exhibit that make me feel lucky to be a part of their career journey and that I look for when I’m approached by young professionals. 1. Mentors help you achieve clarity through guidance and encouragement.

Banana Almond Flax Smoothie Recipe. Ricky Gervais Shares His Secrets for Success: Be a "Cocky Little Nobody" TIME asked Ricky Gervais to write about the secrets of his success. 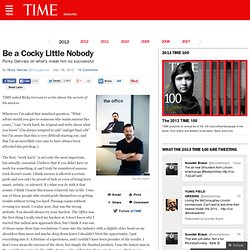 Whenever I’m asked that standard question, “What advice would you give to someone who wants success like yours,” I say “work hard, be original and write about what you know” (I’m always tempted to add “and get final edit” but I’m aware that this is very difficult starting out, and that I’m an incredibly rare case to have always been afforded this privilege.) The first, “work hard,” is not only the most important, but actually, essential. I believe that if you didn’t have to work for something, it can’t truly be considered success. Luck doesn’t count. I think success is allowed a certain pride and you can’t be proud of luck or even of being born smart, artistic, or talented. (MORE: Ricky Gervais on The Difference Between American and British Humour) Secondly, being original is often considered dangerous if you want huge mainstream success.

The third thing is to write about what you know. Ricky Gervais' Nine Commandments of Being Nice. Ricky Gervais: Is There a Difference Between British and American Humor. It’s often dangerous to generalize, but under threat, I would say that Americans are more “down the line.” 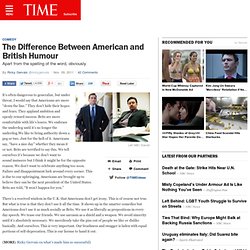 They don’t hide their hopes and fears. They applaud ambition and openly reward success. Brits are more comfortable with life’s losers. We embrace the underdog until it’s no longer the underdog.We like to bring authority down a peg or two. Just for the hell of it. There’s a received wisdom in the U.K. that Americans don’t get irony. (MORE: Ricky Gervais on what’s made him so successful) This can sometimes be perceived as nasty if the recipients aren’t used to it. I guess the biggest difference between the U.S. version and the U.K. version of The Office reflected this. Recently I have been accused of being a shock comic, and cruel and cynical. (VIDEO: Ricky Gervais on Talking Funny, The Office and Hosting Awards Shows)