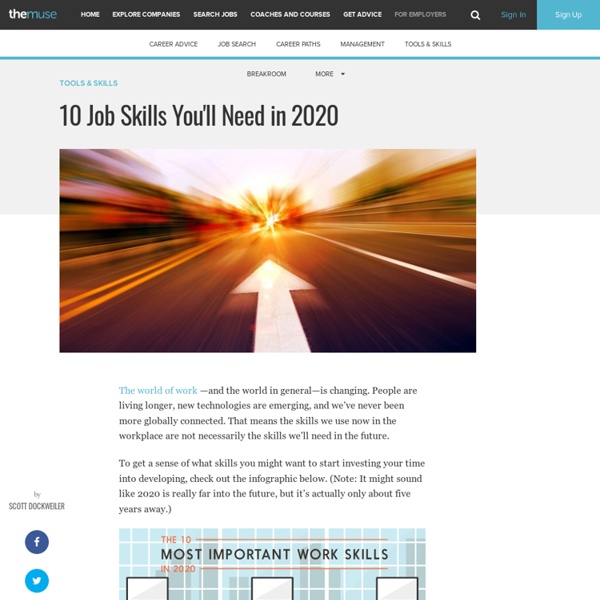 The world of work—and the world in general—is changing. People are living longer, new technologies are emerging, and we’ve never been more globally connected. That means the skills we use now in the workplace are not necessarily the skills we’ll need in the future. To get a sense of what skills you might want to start investing your time into developing, check out the infographic below. (Note: It might sound like 2020 is really far into the future, but it’s actually only about five years away.) Infographic courtesy of Top10OnlineColleges.org.

The 10 Most Important Work Skills in 2020 Share this infographic on your site! <a href=" src=" alt="Important Work Skills for 2020" width="500" border="0" /></a><br />Source: <a href=" The 10 Most Important Work Skills in 2020 Unesco. 50th anniversary of Nubia Campaign UNESCO, Egypt and Sudan have started commemorating the 50th anniversary of the Nubia Campaign, a defining example of international solidarity when countries understood the universal nature of heritage and the universal importance of its conservation. The Egyptian and Sudanese governments' request - in April and October 1959 respectively - for UNESCO's help to save the 3,000-year-old monuments and temples of ancient Nubia from an area that was to be flooded by the Aswan Dam marked the start of unprecedented campaign. "A moving demonstration of the miracles that can be achieved by international cooperation," in the words of the Director-General of UNESCO, Koïchiro Matsuura who sent a message to the participants of a meeting held in Egypt to commemorate the Nubia Campaign. "Saving the temples and artefacts of Nubia became an urgent priority transcending national interests and pride, and, as we all know, the international community brilliantly rose to that challenge.

Skills of the Future: 10 Skills You'll Need to Thrive in 2020 [Infographic] Skills of the Future: 10 Skills You’ll Need to Thrive in 2020 [Infographic] Posted by Guthrie-Jensen Consultants Technology is advancing at such a rapid pace that in 2020, about 5 million jobs will be replaced by automated machines. Self-driving cars will gradually change the way we travel, and artificial intelligence (AI) will soon make decisions for us. We are on the verge of the Fourth Industrial Revolution, an age that will require a new set of skills for the workforce of tomorrow. Before we go deeper into what the fourth industrial revolution means and how it will affect the future workplace, here’s a quick overview into the previous industrial revolutions.

The Future of Work: Quantified Employees, Pop-Up Workplaces, And More Telepresence For many people, especially those working at desk jobs, the workplace is very different than it was 20 years ago: there’s a computer at every desk, telecommuting is fairly common, and the traditional cubicle is giving way to more collaborative spaces. We’ve seen predictions about where we’ll go from here before; now PSFK, a popular blog that also happens to be a thriving consultancy, has come up with its own version of the future of work, described in a new 138-page report. It’s not as fantastical as many future-forward reports--it’s planted firmly in ideas that are already gaining a lot of traction. Perhaps that makes it more accurate. These Will Be The Top Jobs In 2025 (And The Skills You’ll Need To Get “There are some overarching shifts poised to change the nature of work itself over the next decade,” says Devin Fidler, research director at Institute for the Future, a nonprofit research center focused on long-term forecasting. That includes a demand for new skills and strategies that could help people to thrive in future work environments, So what do you need to work on to be marketable in 2025? Here are six skill areas that the experts recommend, as well some of the strongest job-growth categories, as defined by the Bureau of Labor Statistics (BLS) and other sources–that relate to them. Technology And Computational Thinking

10 well paid jobs of the future Mr Bellini posited the idea of an elderly well-being consultant, who specialises in personalised care for older patients, or a memory augmentation surgeon who helps counter memory loss. He also saw big changes in farming as food resources became scarce, with genetically modified crops becoming common and crops grown vertically in areas resembling multi-storey car parks to save space. Ian Pearson, a futurologist who wrote You Tomorrow, sees job growth in the field of augmented reality, where the real world is overlaid with computer-generated images. “When you look at a building it’s constrained by planning laws, but in cyberspace you can make it look however you want,” he said.

7 Predictions For The Future Of Work Everything you thought you knew about the workplace is already outdated. Gone are the days when decisions were made from the top down and when all anyone was expected to do was simply “their job.” As a Corporate Anthropologist, I study the cultures of organizations—how they evolve and intersect with what’s happening right now, and how the people in them influence and shape their communities.

The Future of Skills: Employment in 2030 This report maps out how employment is likely to change in the future - including the implications for skills - and anticipates a number of new occupations. Key findings Around one-tenth of the workforce are in occupations that are likely to grow as a percentage of the workforce and round one-fifth are in occupations that will likely shrink. Recent debates about the future of jobs have mainly focused on whether or not they are at risk of automation.

Future of Work: What Skills Will Help Us Keep Pace? From Elon Musk’s tweet that artificial intelligence may be more dangerous than nuclear weapons to the growing clamor of voices warning robots will take away our jobs, it is clear we are focusing more on the problems of AI, robotics, and automation than the solutions. While the problems are real and should be taken into account, social innovators around the world are already working to deliver solutions. It’s true that today’s technology is reworking the economy and our role in it. But this needn’t herald economic end times.

10 People Share The Mistakes That Cost Them A Job Offer When it comes to fear-inducing situations, job interviews are right up there with public speaking and first dates. In fact, a recent survey of 1,000 job seekers found that 92% of people feel interview anxiety, citing doubt over their qualifications, whether they’d be able to answer questions correctly—and even if they’d make it to the meeting on time. Frankly, this stat should come as no surprise. After all, you’re trying to build rapport with strangers in an unfamiliar place, you’re being put on the spot—and there’s a lot at stake from this one encounter. But in order to really rock that interview, you’ve got to push the fear aside and boost your confidence.

Role of the Application Architect - Technical Blog - Future Processing — Technical Blog – Future Processing “Architect” is one of the buzzwords sometimes used just to name an important person working in the software development department. In other cases, we will only call this way people who understand how given software works. For some people it will be another level of software developers’ career ladder. Sometimes the word ‘architect’ describes a person who draws lines and rectangles on whiteboards. All in all, saying “architect” most of us does not actually know what they want to express.

Garbage designer, robot counsellor among the predicted jobs of 2030 About 15 years from now, farmers will have made their way from the countryside to the city, counsellors will help ensure the right robot goes to the right family and garbage designers will lead the upcycling movement. Those are some predictions made by the Canadian Scholarship Trust Plan’s Inspired Minds initiative, which aims to give Canadians a sneak peek of the job market in 2030. Some of the more curious careers include:

WHAT *SHOULD* WE BE WORRIED ABOUT? Clematis 2013 by Katinka MatsonClick to Expand | www.katinkamatson.com "The most stimulating English-language reading to be had from anywhere in the world." —The Canberra Times "A profound question a treasure trove of ideas...each one is a beautiful and instructive reflection, which encourages thinking and reading