Confessions of an Economic Hitman

The New Confessions of an Economic Hit Man. By John Perkins My success as chief economist at a major international consulting firm was not due to the lessons I learned in business school. 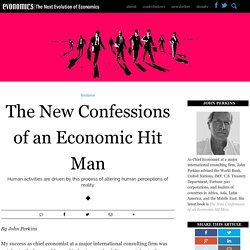 It was not due to the competence of my staff of brilliant econometricians and financial wizards. Those things may have helped at times. But there was something else that made it all happen. That something else was the same something else that elevated George Washington, Henry Ford, Mahatma Gandhi, Mother Theresa, Martin Luther King Jr, Steve Jobs, and other successful people to the heights of their success. That something else is available to everyone of us. It is the ability to alter objective reality by changing perceived reality, what we might think of as the Perception Bridge. As described in my book The New Confessions of an Economic Hit Man, my job was to convince heads of state of countries with resources our corporations covet, like oil, to accept huge loans from the World Bank and its sister organizations.

“Reality is merely an illusion.” DN! Confessions of an Economic Hit Man: How the U.S. Uses Globalization to Cheat Poor Countries Out of Trillions. Wikipedia: Transfer pricing. Transfer pricing is a profit allocation method used to attribute a multinational corporation's net profit (or loss) before tax to countries where it does business. 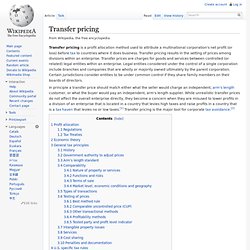 Transfer pricing results in the setting of prices among divisions within an enterprise. Transfer prices are charges for goods and services between controlled (or related) legal entities within an enterprise. Legal entities considered under the control of a single corporation include branches and companies that are wholly or majority owned ultimately by the parent corporation. Certain jurisdictions consider entities to be under common control if they share family members on their boards of directors. In principle a transfer price should match either what the seller would charge an independent, arm's length customer, or what the buyer would pay an independent, arm's length supplier. Profit allocation[edit] Regulations[edit] Tax Treaties[edit] Many systems impose penalties where the tax authority has adjusted related party prices.

PF Thread: Corporation Tax. Amazon. DN! Confessions of an Economic Hit Man: How the U.S. Uses Globalization to Cheat Poor Countries Out of Trillions. John Perkins describes himself as a former economic hit man–a highly paid professional who cheated countries around the globe out of trillions of dollars. 20 years ago Perkins began writing a book with the working title, "Conscience of an Economic Hit Men. 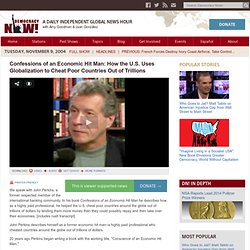 " Perkins writes, "The book was to be dedicated to the presidents of two countries, men who had been his clients whom I respected and thought of as kindred spirits–Jaime Roldós, president of Ecuador, and Omar Torrijos, president of Panama. Both had just died in fiery crashes. Their deaths were not accidental. They were assassinated because they opposed that fraternity of corporate, government, and banking heads whose goal is global empire. John Perkins goes on to write: "I was persuaded to stop writing that book. But now Perkins has finally published his story. John Perkins, from 1971 to 1981 he worked for the international consulting firm of Chas T. 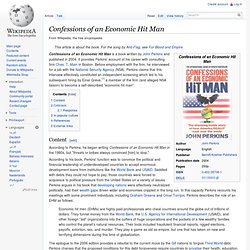 " According to his book, Perkins' function was to convince the political and financial leadership of underdeveloped countries to accept enormous development loans from institutions like the World Bank and USAID. Saddled with debts they could not hope to pay, those countries were forced to acquiesce to political pressure from the United States on a variety of issues. Perkins argues in his book that developing nations were effectively neutralized politically, had their wealth gaps driven wider and economies crippled in the long run. In this capacity Perkins recounts his meetings with some prominent individuals, including Graham Greene and Omar Torrijos. Confessions of an Economic Hitman. Corporate Assassins Determine World Order.