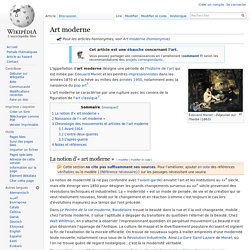 Abstract expressionism. Cubisme. Dada. Dada (/ˈdɑːdɑː/) or Dadaism was an art movement of the European avant-garde in the early 20th century. 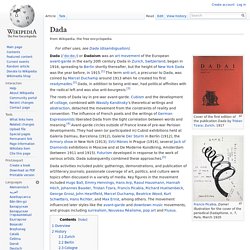 Dada in Zurich, Switzerland, began in 1916, spreading to Berlin shortly thereafter, but the height of New York Dada was the year before, in 1915.[1] The term anti-art, a precursor to Dada, was coined by Marcel Duchamp around 1913 when he created his first readymades.[2] Dada, in addition to being anti-war, had political affinities with the radical left and was also anti-bourgeois.[3] Francis Picabia, Dame! Illustration for the cover of the periodical Dadaphone, n. 7, Paris, March 1920 Overview[edit] André Breton. André Breton (French: [ɑ̃dʁe bʁətɔ̃]; 19 February 1896 – 28 September 1966) was a French writer and poet. 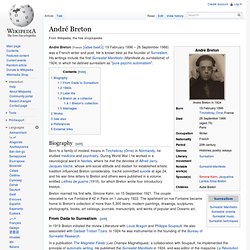 He is known best as the founder of Surrealism. His writings include the first Surrealist Manifesto (Manifeste du surréalisme) of 1924, in which he defined surrealism as "pure psychic automatism". Biography[edit] Born to a family of modest means in Tinchebray (Orne) in Normandy, he studied medicine and psychiatry. During World War I he worked in a neurological ward in Nantes, where he met the devotee of Alfred Jarry, Jacques Vaché, whose anti-social attitude and disdain for established artistic tradition influenced Breton considerably. 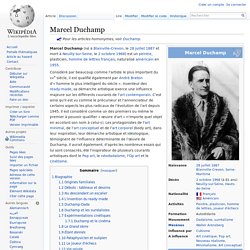 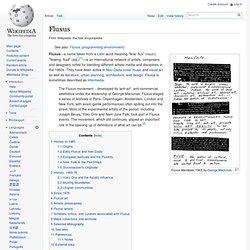 Joseph Beuys. John Cage. Not to be confused with John Cale. 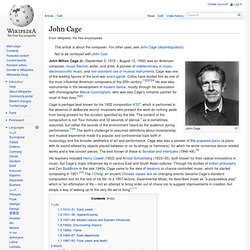 John Cage Cage is perhaps best known for his 1952 composition 4′33″, which is performed in the absence of deliberate sound; musicians who present the work do nothing aside from being present for the duration specified by the title. The content of the composition is not "four minutes and 33 seconds of silence," as is sometimes assumed, but rather the sounds of the environment heard by the audience during performance.[7][8] The work's challenge to assumed definitions about musicianship and musical experience made it a popular and controversial topic both in musicology and the broader aesthetics of art and performance.

Cage was also a pioneer of the prepared piano (a piano with its sound altered by objects placed between or on its strings or hammers), for which he wrote numerous dance-related works and a few concert pieces. Art contemporain. Un article de Wikipédia, l'encyclopédie libre. 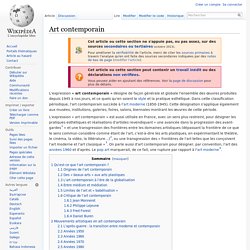 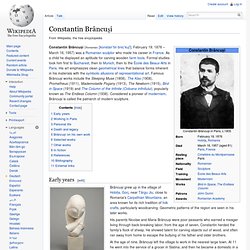 Geometric patterns of the region are seen in his later works. His parents Nicolae and Maria Brâncuși were poor peasants who earned a meager living through back-breaking labor; from the age of seven, Constantin herded the family's flock of sheep. Henry Moore. Henry Spencer Moore OM CH FBA RBS (30 July 1898 – 31 August 1986) was an English sculptor and artist. 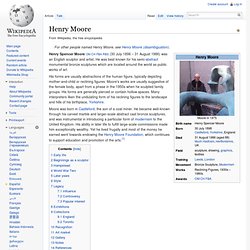 He was best known for his semi-abstract monumental bronze sculptures which are located around the world as public works of art. His forms are usually abstractions of the human figure, typically depicting mother-and-child or reclining figures. Moore's works are usually suggestive of the female body, apart from a phase in the 1950s when he sculpted family groups. His forms are generally pierced or contain hollow spaces. Barbara Hepworth. Dame Barbara Hepworth DBE (10 January 1903 – 20 May 1975) was an English artist and sculptor. 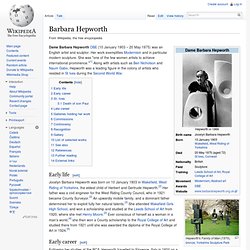 Her work exemplifies Modernism and in particular modern sculpture. She was "one of the few women artists to achieve international prominence. TateShots - Barbara Hepworth. Impressionism. Impressionism is a 19th-century art movement that originated with a group of Paris-based artists. Their independent exhibitions brought them to prominence during the 1870s and 1880s, in spite of harsh opposition from the conventional art community in France.

The name of the style derives from the title of a Claude Monet work, Impression, soleil levant (Impression, Sunrise), which provoked the critic Louis Leroy to coin the term in a satirical review published in the Parisian newspaper Le Charivari. Overview[edit] Radicals in their time, early Impressionists violated the rules of academic painting. They constructed their pictures from freely brushed colours that took precedence over lines and contours, following the example of painters such as Eugène Delacroix and J. Impressionism emerged in France at the same time that a number of other painters, including the Italian artists known as the Macchiaioli, and Winslow Homer in the United States, were also exploring plein-air painting.

Paul Cézanne. Paul Cézanne (US /seɪˈzæn/ or UK /sɨˈzæn/; French: [pɔl sezan]; 1839–1906) was a French artist and Post-Impressionist painter whose work laid the foundations of the transition from the 19th-century conception of artistic endeavour to a new and radically different world of art in the 20th century. Cézanne's often repetitive, exploratory brushstrokes are highly characteristic and clearly recognizable. He used planes of colour and small brushstrokes that build up to form complex fields. The paintings convey Cézanne's intense study of his subjects. Cézanne can be said to form the bridge between late 19th-century Impressionism and the early 20th century's new line of artistic enquiry, Cubism. Claude Monet. A trier.