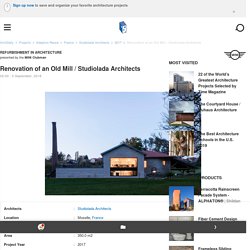 Raúl Sánchez, José Hevia · Duplex Tibbaut. The starting point was two independent dwellings on top of each other on the ground floor and mezzanine of a modest, old apartment building between dividing walls in the heart of the Raval (Barcelona). 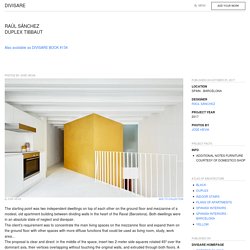 Both dwellings were in an absolute state of neglect and disrepair. The client's requirement was to concentrate the main living spaces on the mezzanine floor and expand them on the ground floor with other spaces with more diffuse functions that could be used as living room, study, work area... The proposal is clear and direct: in the middle of the space, insert two 2-meter side squares rotated 45º over the dominant axis, their vertices overlapping without touching the original walls, and extruded through both floors.

A simple and resounding arrangement in which two ideal shapes, two perfect extruded squares, are imposed on the existing irregularity and arrange all the floor space without the need for any other means or elements. Carles Oliver, José Hevia · St. Miquel 19. Coach House / Gardner Architects. Works architecture + design. Qimen Black Tea House / SU Architects. Angular doors connect tapered extension by Mustard Architects with patio. Mustard Architects has added this extension to an Edwardian house in west London, featuring a tapered plan that expands towards angular glazed doors set into its asymmetric gabled facade. 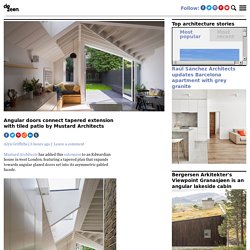 East London studio Mustard Architects was asked to renovate and extend the property for new owners who wanted a brighter, more contemporary interior with an enhanced connection to the rear garden. The existing house featured a typically cramped and compartmentalised layout, so the studio began by removing unwanted partitions to create a more seamless series of spaces. An angled hallway opens up as it extends from the front door towards the new addition at the rear, which houses an open-plan kitchen, dining space and snug. The extension's form was informed in part by local planning regulations. The resulting pitched-roof structure slopes down towards the boundaries on either side and prevents overlooking or overshadowing its neighbours.

Photography is by Tim Crocker. Two Houses, Deers and Trees / Lenka Míková. Al-Jawad Pike combines brick, concrete and timber for London extension. "Matter-of-fact" materials such as concrete, brick, and timber in muted tones have been used to create this extension to a family home in Stoke Newington, north London. 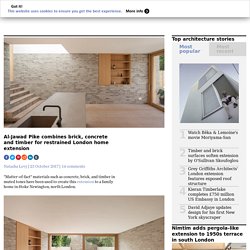 London-based architects Al-Jawad Pike expanded the Victorian property for a teacher, a TV producer, and their young daughter. The studio was asked to create a new cooking and dining area that directly overlooked the garden – replacing a former kitchen that the client had complained of being cramped and dark, with views to the outdoors obstructed by a small utility annex. The studio, which is lead by Jessam Al-Jawad and Dean Pike, designed the extension as one open space and employed simple materials in a restrained colour palette.

Grey brick walls have been paired with Douglas fir floor boards, while concrete has been used for the kitchen work surfaces. Oak finished with natural oil has also been used for cabinetry including integrated shelving. Photography is by Ståle Eriksen. Yellow Cloud Studio adds distinctive triangular extension to London house. London-based practice Yellow Cloud Studio has designed a triangular-planned glass and plywood extension for a Victorian house in Hackney that makes a virtue of its awkward space. 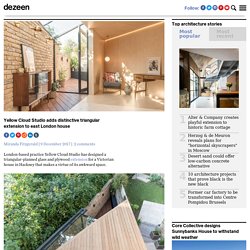 The existing layout included a north-facing, triangular garden that was slightly higher than the lower-ground floor and accessed via a bulky external staircase from the ground floor. Practice co-founder Eleni Soussoni said this proved to be the studio's biggest challenge, as well as a crucial element for the design process. The external staircase was demolished and the practice dug down so the 25-square-metre extension is level with the lower-ground floor. It takes up the majority of the existing garden space, however, the design and use of materials creates the perception that the space is semi outdoors.

Instead of squeezing the extension up against the back of the original house to maximise the garden, an open-sided timber structure sits proudly across the centre of the space, appearing almost freestanding. Ruin Studio / Lily Jencks Studio + Nathanael Dorent Architecture. Al-Jawad Pike combines brick, concrete and timber for London extension. Pinterest. Architects preserve rotting structure in conversion of 18th-century cottage. David Connor Design and Kate Darby Architects have transformed a tumbledown cottage in England's West Midlands into a home and studio, enveloping the ruined old structure in a shell of black corrugated metal. 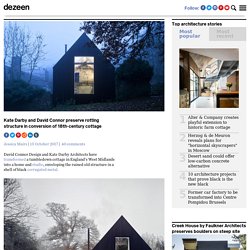 David Connor and Kate Darby set about preserving the 300-year-old timbers, erecting a new steel frame over the listed ruins and cladding it in blackened corrugated iron to protect it from further weathering. The new structure extends to encompass a small stable that would have stood at one end of the cottage, which now houses a studio for the pair. A small gabled entrance has also been affixed to one flank of the building and clad uniformly in sheets of the same corrugated cladding. West Yard Farm / van Ellen + Sheryn. West Yard Farm / van Ellen + Sheryn Architects Location Dartmoor National Park, United Kingdom Lead Architects Eilir Sheryn, Ian Phillips Area 400.0 m2 Project Year 2013 Photographs Manufacturers Cantifix, Mandarin Stone From the architect. 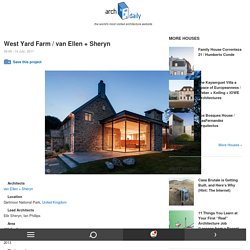 The clients brief was to refurbish and extend an 18th century Dartmoor farmstead to provide a large, contemporary family home that makes the most of the 60 acre wooded valley setting. An important wish was for as self-sufficient a dwelling as possible, with a carefully considered environmental approach. Although the buildings were not listed, as they were located within the conservation area of North Bovey and the National Park, so a key consideration was their respectful refurbishment and extension. After stripping away the sprawl of incoherent 1950’s extensions between the farmhouse and barn, the qualities of the original building cluster could be appreciated and subsequently added to. Avant-Garde Ruralation Library / AZL Architects. Avant-Garde Ruralation Library / AZL Architects Architects Location Architect in Charge Zhang Lei / AZL Architects Design Team Zhang Lei，Liu Wei, Ma Haiyi，Chen Junjun, Zhang Qilin, Shao Xuan Photographers YAO Li, HU Jun Area 260.0 m2 Project Year 2015 Collaborator ADI-NJU More SpecsLess Specs From the architect. 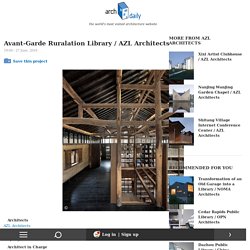 Located in Daijiashan Village,Eshan She Nationality Township of Tonglu, Zhejiang Province, the Avant-Garde Ruralation Library is the 11th Bookstore run by the Librairie Avant-Garde. Dezeen. This cork-clad studio provides a shared workspace for a musician and a seamstress in the back garden of their north-London home. 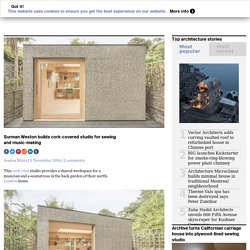 London office Surman Weston – formerly Weston, Surman & Deane – designed Cork Study for a spot at the back of the couple's narrow garden. It follows another backyard studio the architects built back in 2014. Spanning almost the full width of the space, the building is surrounded by brick walls and foliage that stretches over from neighbouring gardens. Reynard/rossi-udry house. Renovation Project of Grandma’s Yard in Huangshandian Village. This 1930s Brick Bungalow Received A Contemporary Update. Photography © Katherine Yu In a suburb in Sydney, Australia, TRIBE STUDIO gave a 1930s original brick bungalow a modern upgrade and extension to better suit the needs of the family living there. 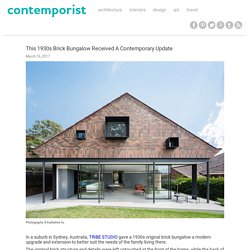 The original brick structure and details were left untouched at the front of the home, while the back of the house had a brick and glass extension added to it that allowed the home to maintain the look of a single storey home while creating two extra bedrooms, a bathroom, and a combined living, dining, and kitchen area spread out on two levels.

Let’s take a look… Here you can see the street view of the front of the house. Church Hill Barn / David Nossiter Architects. Church Hill Barn / David Nossiter Architects Architects Location Suffolk, CO10, United Kingdom Structural Engineer AFP Consult Ltd Project Year 2016 Photographs Manufacturers GEZE, Glazing Vision From the architect. The site, situated on the Essex/Suffolk borders within the landscape immortalised by Constable was originally the home farm of the nearby estate, destroyed by fire in the 1950s. It consists of a collection of farm buildings forming a courtyard. BEFORE and AFTER - This old carpenter’s workshop was converted into a contemporary livable space. After photography by David Benito Cortázar FFWD Arquitectes have recently completed the renovation of an old carpenter’s workshop in Barcelona, Spain, into a two spaces, a guest suite / studio space and the second, the main living apartment.

Before we have a look at more photos of the finished interior, let’s see what the designers had to work with. Here’s a look at the guest suite / studio space. Original details like the walls and ceiling have been left in place, but new details like a concrete floor, barn doors and a bathroom have been included.