Repurposed from That into a Home 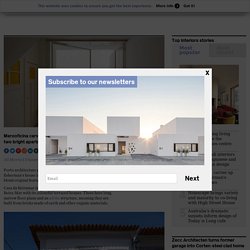 Casa da Beiramar is located in the historic neighbourhood of Beira-Mar with its colourful terraced houses. These have long, narrow floor plans and an adobe structure, meaning they are built from bricks made of earth and other organic materials. Clad in traditional azulejos tiles and decorated with green ceramic flowerpots, the houses were originally built for the local fishing community. "This part of the city has been witnessing an interesting fusion between the old dwellers and more recent inhabitants," explained Merooficina founders Catarina Ribeiro and Vitório Leite.

This larch-clad Gloucestershire home was once a blacksmith’s shop - The Spaces. Furniture, horseshoes and wrought-iron gates were all made inside the living room of this Gloucestershire property – once a working Blacksmith’s forge. 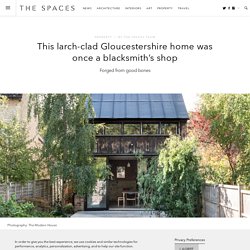 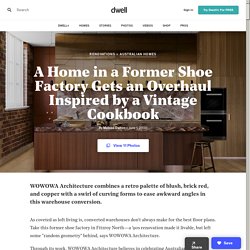 Take this former shoe factory in Fitzroy North—a ’90s renovation made it livable, but left some "random geometry" behind, says WOWOWA Architecture. Through its work, WOWOWA Architecture believes in celebrating Australian culture—including its kitsch and "a love of daffy colloquialisms. " The firm says that its "colorful, contextual, and socially sustainable ‘forever homes’ are for design-savvy professionals who know life’s too short for boring spaces.

" Homes reborn: 6 dramatic conversions where the past is present - The Spaces. When it comes to character, nothing beats a home with history. 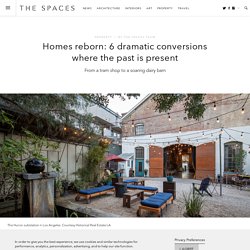 But properties with a past usually also have a long list of demands before they’re fit to move into. Following their adaptive reuse, these six properties offer all the charm of converted industrial buildings but with the hard work already done. The Button Factory Lofts, London, UK Located at the top of an east London warehouse conversion, this trio of flats makes the most of their soaring industrial interiors.

Polished concrete floors and black corrugated steel nod to their past, while pale timber panels and fittings put a contemporary spin on it all. The Parchment Works by Will Gamble Architects. When a couple in Northamptonshire, United Kingdom, tapped Will Gamble Architects to design an extension for their Victorian home, they expected the adjacent stone wall ruin would have to go. 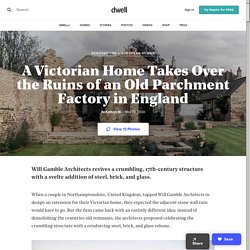 But the firm came back with an entirely different idea: instead of demolishing the centuries-old remnants, the architects proposed celebrating the crumbling structure with a reinforcing steel, brick, and glass volume. Photo by John Dehlin "Despite falling into disrepair, the ruin was very important within the community and further afield," says director Will Gamble. "It once produced parchment paper and was rumored to have made paper for members of the royal family. The ruin was also very much part of the character of the building as a whole, and we felt strongly that it needed to be preserved. " Framework transforms Amsterdam warehouse into family home. The creative director of design studio Framework has turned a neglected 19th-century warehouse in Amsterdam into a plush family home for his wife and two children. 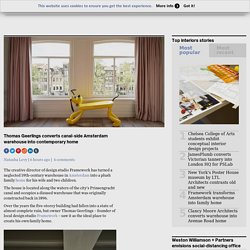 The house is located along the waters of the city's Prinsengracht canal and occupies a disused warehouse that was originally constructed back in 1896. Over the years the five-storey building had fallen into a state of almost complete ruin, but owner Thomas Geerlings – founder of local design studio Framework – saw it as the ideal place to create his own family home. Framework first had to figure out how to work around the building's meagre 50-square-metre footprint and narrow four-metre-wide facade, which was allowing very little natural light into the rear internal rooms. Workshop for Living Warehouse Conversion by Leah Hudson-Smith. Determined to build a personalized home with moderate means, creative couple Leah Hudson-Smith and Wally Maloney set out to convert a warehouse in the Melbourne suburb of Northcote, using their own trade skills to reduce costs. 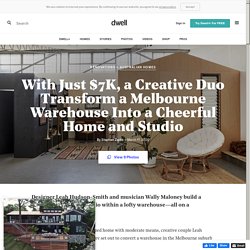 The dwelling comes with a finite lifespan—a nine-year commercial lease—but in the ever-inflating housing market, that counts as more stability than most people can bank on, even with the cost of materials added in. "The real estate market in Melbourne is limiting if you’re a renter," says Hudson-Smith. "We don’t have huge incomes: we’re both in the creative industries, so we don’t have loads of money to spend on housing all the time.

Anna & eugeni bach transform chocolate factory into a luminous oasis. In the heart of the small town of la bisbal in spain, architects anna & eugeni bach have transformed the curious typology of a former chocolate factory into a light-filled, residential oasis. the dwelling, which lies on historic block from the late nineteenth century, is spatially unique. anna & eugeni bach chose to make each floor of the three-storey structure using a different technique. while the ground floor comprises metal beams that support a catalan vault, the first floor is made from a main structure of metal beams with a wooden framework. the roof is built from large logs that support a thin slab made of bricks, and is finished with a ceramic tile roof. all images by eugeni bach site plan. 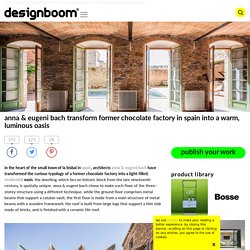 Redfern Warehouse by Ian Moore Architects. In recent years, a number of Sydney’s beautiful warehouses have been lost to demolition—which is why architect Ian Moore was elated to win a competition to adapt an enormous warehouse in the inner-city suburb of Redfern. 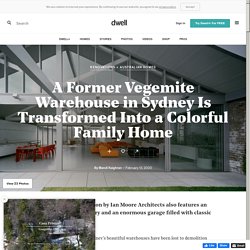 The brief called for a four-bedroom family home with self-contained guest accommodations, a home office to be used as an equine genetics laboratory, and a large garage for a collection of classic cars. The clients—a couple with two young boys and a large dog—both work from home and spend a significant amount of time in the warehouse. Apartment renovation transforms garage into colorful home. Once a garage, this striking two-bedroom apartment in Neuilly-sur-Seine, France, now shows off bright colors and creative built-ins. 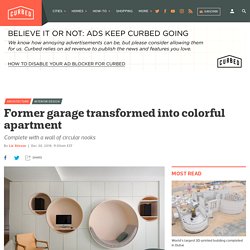 Atelier Pierre Louis Gerlier completely transformed the space, leaving no trace of its former life behind. The apartment is anchored by the living room, whose centerpiece is a wall of cabinets with circular recessed nooks for a computer desk, speakers, and a curved sofa that you’ll literally curl into. The architects deployed some subtle visual tricks to make the space feel bigger and brighter. Edit! renovates an old brick guardhouse to create a family home in prague.

Situated on a small island on the banks of prague‘s vltava river, czech design studio edit! Has transformed a former guardhouse into a new family residence. the existing building, which dates back to the austro-hungarian empire, had been abandoned for decades and left to decay. this new intervention works within the remaining brick shell to create the two story ‘house on an island.’ all images © jan pernekr considering that the building is in fact located in a flood zone, edit!

Added a new layer of concrete on top of the existing wall, raising all the main rooms above the floodplain level. the program is split over two levels. on the first floor, an open-plan kitchen, dining and living area dominates the space. a black metal spiral staircase features in the center of the house rising up to the more private upper level, which comprises a bedroom, bathroom and study space. project info: project name: ‘house on an island’ location: prague, czech republic. Paco oria estudio transforms 100-year-old house into casa rocafull in valencia. Paco oria estudio has revived an 100-year-old house in the old fisherman’s quarter of el cabanyal in valencia, transforming it into casa rocafull, a residence for a young couple and their twins. located on a rectangular, narrow and deep plot, the house sticks to the street, leaving a patio at the back, while it has retained its solid brick walls and wooden beams. focusing initially on strengthening the existing, handmade construction by dismantling and reinforcing it, the house was then reduced to a skeleton with an open interior, upon which the architects based the new, requested program. inwards view from the backyard, connecting both façades all images courtesy of paco oria estudio recognizing the value of the existing house in its handmade execution and quality of well-selected and manufactured materials, paco oria estudio began the restoration by strengthening its building envelope, the horizontal structure, and the decks.

Clover Hill Residence by Ravi Raj occupies historic foundry in New York. American studio Ravi Raj Architect has overhauled a 19th-century masonry building on a wooded New York property to create a contemporary weekend home for a pair of urban dwellers. The Clover Hill Residence sits on a forested hillside in the town of Somers, located about an hour's drive from Manhattan.

The project involved renovating an unusual house that began its life as an iron foundry in the 1890s. The clients, Claire Benoist and Derek Kilner, live in New York City and aimed to use the dwelling as a country house. To design the renovation, they turned to their friend, Ravi Raj, who had recently launched an eponymous studio in Brooklyn after working for Adjaye Associates. The gabled building has an interesting history. In the 1940s, three artists bought the property and converted the buildings into homes for their families. While the house needed updating, Raj and his clients wanted to preserve historic elements where possible. Major changes took place inside. Project credits: JC Architecture transforms derelict dormitory Living Lab house. JC Architecture has converted a 90-year-old dormitory building in Taipei into a contemporary family home, to serve as a blueprint for reviving similar neglected historical properties throughout the city. The 223-square-metre building, now named Living Lab, was bought by JC Architecture from the National Taiwan University.

It was built more than 90 years ago when Taiwan was under Japanese rule but over the years it has undergone significant alterations and had largely been used as a dormitory. Eventually, it fell into a state of disrepair and had no toilets, missing floors and crumbling walls. Albert Park by Robson Rak Architects. In Melbourne, Robson Rak Architects needed to refashion a historical cottage and stable building into a new family residence. Andreas Martin-Löf Arkitekter creates Lyceum apartments inside old laboratories. El Teatro by Cadaval & Solà-Morales. Arquitectura-G builds modern house behind crumbling old stone walls. A Garage Converted into a Stylish Studio Apartment: Porteous Studio Vacation Rental in Edinburgh. 1942 army train car used in WWII gains new life as a tiny home. For those history buffs out there, a stay in this beautifully converted WWII train car would be a dream come true.

Wilkinson Eyre has completed its transformation of a trio of Victorian gasholder frames at London's King's Cross into luxury apartments with interiors by Jonathan Tuckey Design. Architects preserve rotting structure in conversion of 18th-century cottage. 10 unusual buildings transformed into homes from Pinterest. This week's roundup of images that have been popular on Pinterest showcases 10 unusual buildings that have been adapted into homes, including a coal crane, a post office and a church.