Perspectives Inside and Outside of Japan Continued

Japan Studies. Kyoto Journal – Perspectives from Asia. Emily Anderson, "Christianity and Imperialism in Modern Japan: Empire for God" (Bloomsbury, 2014) A Concept Limited. A story of ink and steel. The Knowledge of Nature and the Nature of Knowledge in Early Modern Japan, Marcon. The Changing Shape of Protest in Japan. A self-professed nerd. 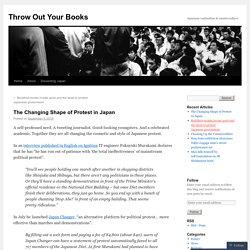 “What’s the difference between protesting or stealing?” Some Theatre Responses to Anpo 1960. The media obsession, both locally and overseas, with what swiftly became an old chestnut — “artistic responses to 3.11 and Fukushima” — has mercifully started to fade, and as it recedes so can we really begin the work of assessing the cultural, social and political impact of the Tōhoku disaster. 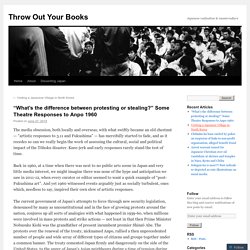 Knee-jerk and early responses rarely stand the test of time. Back in 1960, at a time when there was next to no public arts scene in Japan and very little media interest, we might imagine there was none of the hype and anticipation we saw in 2011-12, when every curator or editor seemed to want a quick example of “post-Fukushima art”. And yet 1960 witnessed events arguably just as socially turbulent, ones which, needless to say, inspired their own slew of artistic responses.

The most famous response to Anpo is probably a cinematic one, Night and Fog in Japan, the political film by Nagisa Ōshima about activists involved in the campaign. So much, so amusing. Self-Immolation and Suicide as Protest in Japan. Many in Japan were shocked by the attempted suicide by self-immolation of a middle-aged protester in Shinjuku on June 29th. 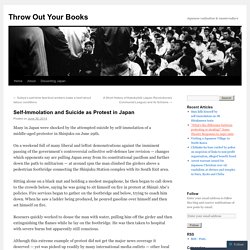 On a weekend full of many liberal and leftist demonstrations against the imminent passing of the government’s controversial collective self-defence law revision — changes which opponents say are pulling Japan away from its constitutional pacifism and further down the path to militarism — at around 1pm the man climbed the girders above a pedestrian footbridge connecting the Shinjuku Station complex with its South Exit area.

Sitting alone on a black mat and holding a modest megaphone, he then began to call down to the crowds below, saying he was going to sit himself on fire in protest at Shinzō Abe’s policies. Fire services began to gather on the footbridge and below, trying to coach him down. When he saw a ladder being produced, he poured gasoline over himself and then set himself on fire. The man, so-far anonymous, recalls several other suicide-protests. Like this: Cleaning Up the Counterculture. A spectre is haunting Tokyo, but it’s not the spectre of communism: it’s a famous movie monster. 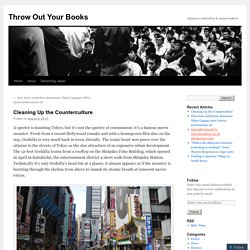 Fresh from a recent Hollywood remake and with a homegrown film also on the way, Godzilla is very much back in town, literally. The iconic beast now peers over the citizens in the streets of Tokyo as the star attraction of an expensive urban development. The 12-foot Godzilla looms from a rooftop on the Shinjuku Toho Building, which opened in April in Kabukichō, the entertainment district a short walk from Shinjuku Station. Technically it’s only Godzilla’s head but at a glance, it almost appears as if the monster is bursting through the skyline from above to launch its atomic breath at innocent movie extras. Godzilla peers over the Kabukichō landscapePhoto: William Andrews.

Animeshon 2006. March 2016 Marks a Time of Change and Rage for Japanese Television Broadcasting. A group of Japanese broadcasters is speaking out about what they say is efforts by the government to restrict press freedoms in Japan. 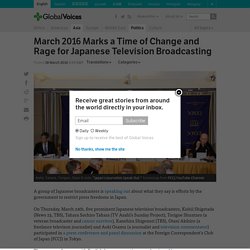 On Thursday, March 24th, five prominent Japanese television broadcasters, Kishii Shigetada (News 23, TBS), Tahara Sochiro Tahara (TV Asahi's Sunday Project), Torigoe Shuntaro (a veteran broadcaster and cancer survivor), Kanehira Shigenori (TBS), Otani Akihiro (a freelance televison journalist) and Aoki Osamu (a journalist and television commentator) participated in a press conference and panel discussion at the Foreign Correspondent's Club of Japan (FCCJ) in Tokyo. The press conference, with English-language captions, can be viewed here. Political Comics: Japan Radicalism and New Left Protest Movements Told Through Manga. When the Liberal Democratic Party wanted to produce an educational pamphlet earlier this year about its desire to change the Constitution of Japan, it chose a medium that many in the West might find surprising, even unbecoming, for such a serious subject: it published the pamphlet as a manga. 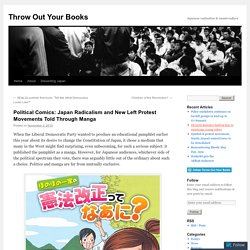 However, for Japanese audiences, whichever side of the political spectrum they vote, there was arguably little out of the ordinary about such a choice. Politics and manga are far from mutually exclusive. The Liberal Democratic Party’s manga about proposed constitutional changes The characters discuss how “unfair” it is that other nations change their constitutions, but Japan doesn’t. Intimacies of Imperialism and Japanese-Black Feminist Transgression: Militarised Occupations in Okinawa and Beyond. The above image is from Extreme Private Eros: Love Song 1974, Hara Kazuo's cinéma vérité style film that depicts Japanese feminists consorting with Black American GIs in Okinawa.[1] This film captures transpacific imperial intimacies of Japanese feminism, Black GIs and the US militarised occupation of Okinawa during the early 1970s. 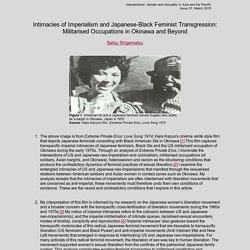 Through an analysis of Extreme Private Eros, I illuminate the intersections of US and Japanese neo-imperialism and colonialism, militarised occupations (of soldiers, Asian bargirls, and Okinawa), heterosexism and racism as the structuring conditions that produce the contradictory dynamics of feminist practices of sexual liberation.[2] I examine the entangled intimacies of US and Japanese neo-imperialisms that manifest through the sexualised relations between American soldiers and Asian women in contact zones such as Okinawa. 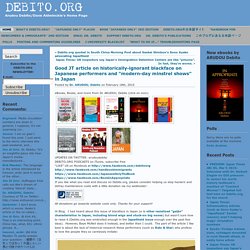 ARUDOU, Debito (click on icon): UPDATES ON TWITTER: arudoudebito DEBITO.ORG PODCASTS on iTunes, subscribe free “LIKE” US on Facebook at If you like what you read and discuss on Debito.org, please consider helping us stop hackers and defray maintenance costs with a little donation via my webhoster: All donations go towards website costs only. Debito.org » Blog Archive » 1912 essay: “Japanese Children are no Menace in Hawaii” (from a “Prosperity-Sharing System for Plantation Laborers” handbook), with surprisingly inclusive arguments. eBooks, Books, and more from Dr. 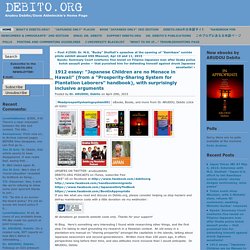 ARUDOU, Debito (click on icon): UPDATES ON TWITTER: arudoudebito DEBITO.ORG PODCASTS on iTunes, subscribe free “LIKE” US on Facebook at If you like what you read and discuss on Debito.org, please consider helping us stop hackers and defray maintenance costs with a little donation via my webhoster: All donations go towards website costs only. Debito.org » Blog Archive » Post #2500: Dr. M.G. “Bucky” Sheftall’s speeches at the opening of “Kamikaze” suicide pilots exhibit aboard USS Missouri, Apr 10 and 11, 2015. eBooks, Books, and more from Dr. 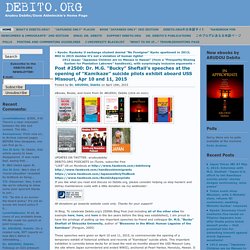 ARUDOU, Debito (click on icon): UPDATES ON TWITTER: arudoudebito DEBITO.ORG PODCASTS on iTunes, subscribe free “LIKE” US on Facebook at If you like what you read and discuss on Debito.org, please consider helping us stop hackers and defray maintenance costs with a little donation via my webhoster: All donations go towards website costs only. Thanks for your support! Hi Blog. How a Japanese American burst Japan's bubble on racism. Growing up in southern Florida, Miki Dezaki was exposed to a lot of stereotypes. The kids around him made jokes about people from Asia — and his immigrant Japanese parents said derogatory things about other Asians. Biracial Miss Universe Japan calls for acceptance of children of mixed marriages. When Ariana Miyamoto was crowned Miss Universe Japan in March, she had been well-prepared growing up for the vitriol that would follow what should have been her breakthrough triumph.

The 21-year-old became the target of online racial bashing from those who didn't want her to represent Japan because of the color of her skin, the product of an African-American father and Japanese mother. But Miyamoto remained undaunted. Antiracism website aids ethnic Korean victims of hate speech in Japan. Ethnic Koreans who suffer racial abuse in Japan now have an online site where they can file grievances and find help. The Anti Racism Information Center was set up in response to growing concerns over hate speech and other forms of discrimination directed against ethnic Koreans. The center, established by a group of Korean residents and Japanese supporters, gathers extensive details surrounding each incident. Survey: 50 percent of foreigners in Saitama feel discriminated against. SAITAMA--Half of foreigners in Saitama Prefecture feel their human rights “are not valued,” but most prefer mutual exchanges over punishment to deal with discriminatory behavior by Japanese, according to a prefectural government survey.

The survey was conducted in the fiscal year ending March 31, with responses received from 152 people of 28 different nationalities who live, work or study in Saitama Prefecture, north of Tokyo. Hate speech against foreigners, harassment of Muslims and other forms of discrimination have been reported in the prefecture, where an estimated 123,000 foreigners accounted for 1.71 percent of the prefecture’s population as of December 2013. One question on the survey asked: “In your life, have you ever felt that your human rights are not valued?” Overall, 50.4 percent answered in the positive, with 35.8 percent responding that they “occasionally feel so,” 11.3 percent replying “often” and 3.3 percent saying “always.”

Rohingya live in limbo in Japan, fear for those floating in boats at sea. On just two hours of sleep, a nervous Aung Aung went through the now-familiar ritual of traveling from Gunma Prefecture to Tokyo to hear strangers decide if he had any future in Japan. Constantly fearing detainment, Aung, 38, knew that any misstep in procedure or suspicion raised could result in immigration officials revoking his provisional status, which comes with a variety of restrictions but at least allows him to remain in the country. “Today was OK, but I have been living here for eight years now always worrying,” he said, after his provisional status was renewed. Tokyo native creates database of Japanese-Americans interned in Hawaii. By YUSUKE OGAWA/ Staff Writer. Japanese language newspapers face extinction in the Americas.

BUENOS AIRES--Antonio Higa is desperate to stave off the collapse of his Japanese language newspaper that has provided valuable information to the Japanese community in Argentina for 67 years. Black in Japan (full documentary) Here’s a Map That Shows You What the Japanese Really Think of Europe. For Fascinating Photos of 20th-Century Japan, Look to 21st-Century Twitter. 戦争のつくりかたアニメーションプロジェクト特設サイト. Tokyo Recognizes Auschwitz: The Rise and Fall of Holocaust Denial in Japan, 1989-1999. Wartime documents shed light on Japan’s secret A-bomb program. Long-forgotten documents on Japan's attempt to build an atomic bomb during World War II have been discovered at Kyoto University, which experts say further confirms the secret program's existence and could reveal the level of the research. The newly found items, dating between October and November 1944, were stored at Kyoto University’s research center. Research into uranium-enrichment equipment, a key to the production of atomic weapons, was scribbled in three of the notebooks.

Japan surrendered in August 1945 before the secret project could reach fruition. “The new data could show us the level of research they were involved in,” said Hitoshi Yoshioka, a professor who studies the history of scientific technology at Kyushu University. It has long been known that two programs were under way in Japan to produce a nuclear weapon during the war. The notebooks in question belonged to Sakae Shimizu, a researcher who worked for Arakatsu. Peace museum, caving in to threats of closure, scraps wartime 'aggression' exhibits. OSAKA--A museum famed for its many exhibits showing Japanese aggression during World War II has removed them, bowing to pressure from conservative politicians.

“We had no choice but to remove the exhibition on the aggression to ensure the survival of the museum,” a source close to the museum explained. Osaka Mayor Toru Hashimoto had threatened to close down the Osaka International Peace Center museum when he was governor of the prefecture. Hashimoto's successor as Osaka governor and a close ally, Ichiro Matsui, praised the facelift when he toured the museum in the city’s Chuo Ward on April 30, the day the facility reopened after renovations. “This looks better now,” Matsui told reporters. Nagoya war archives enable viewers to look inward. NAGOYA--Among the 400 or so items at the newly opened Aichi-Nagoya war archives are the personal diaries of children who were evacuated to rural areas during World War II and the draft cards of soldiers of the Imperial Japanese Army.