Is the ‘Irish Goodbye’ Right for You? The Irish goodbye, the shamrock shuffle, ghosting (in the sense of leaving a party without saying bye; not cutting off someone you’re dating), or what I like to call the secret bail, is nothing new. 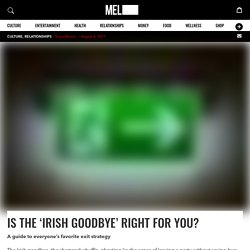 Essays have abounded on the internet for the last few years both defending and deriding the practice. It’s the best thing ever, some argue. It’s the worst thing you can do to people, say others. Both arguments miss the point: Sometimes Irish goodbyes are the perfect and only exit from a drinking situation. Dining Out: The Rule of Six. The Lost Romance of Dance Cards. Etiquette: Protocol of Introducing People. Regarding western European culture. 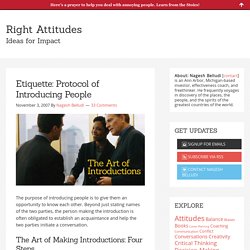 At the workplace political correctness is the rule. Table Manners and Dining Etiquette for Men. “Good manners will open doors that the best education cannot.” 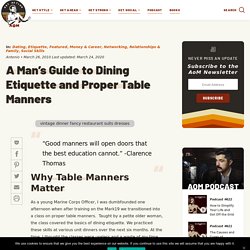 -Clarence Thomas Why Table Manners Matter As a young Marine Corps Officer, I was dumbfounded one afternoon when after training on the Mark19 we transitioned into a class on proper table manners. Taught by a petite older woman, the class covered the basics of dining etiquette. We practiced these skills at various unit dinners over the next six months. Whether dining with a 4 star general, toasting with a Medal of Honor recipient, or sitting with friends and family on Christmas Eve, an understanding of dining protocol makes time spent with others around a table more enjoyable. Watch the Video. How to Make Introductions. Have you ever been at a party with a guy who runs into somebody he knows and starts yammering away while you stand there awkwardly, holding your drink?

Man, I hate when that happens. You’re left in social limbo. I usually have to just take things into my own hands and introduce myself, which is fine, but the exchange would have been much smoother had my friend introduced me to his buddies. Being introduced invites you into the conversation and makes you feel like part of the group, which is why making an introduction shows your respect for your guest. How to Acquire Good Manners. Editor’s note: The following excerpt — “How to Acquire Good Manners” by Bentley Bates — was included in The Boy’s Own Book of Leadership, published in 1933. 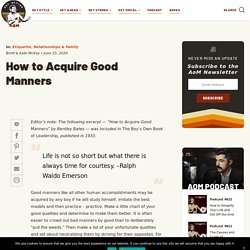 Life is not so short but what there is always time for courtesy. –Ralph Waldo Emerson Good manners like all other human accomplishments may be acquired by any boy if he will study himself, imitate the best models and then practice – practice. What to Do When Someone Tells the Same Stories Over and Over. We all have that friend or relative who tells the same stories over and over. 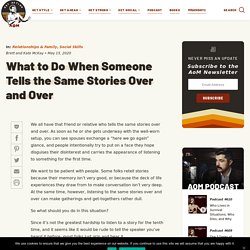 As soon as he or she gets underway with the well-worn setup, you can see spouses exchange a “here we go again” glance, and people intentionally try to put on a face they hope disguises their disinterest and carries the appearance of listening to something for the first time. The New Rules of Chivalry in 2020. Learn a new way to listen Think of this as the new, “Look a man in the eyes when he's talking to you, son.” 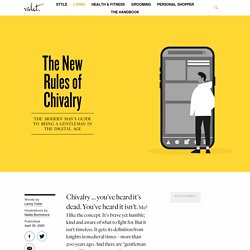 Which means simply show the other person you're listening to them. 11 Things Socially Aware People Don’t Say - Personal Growth - Medium. When it comes to becoming a more socially aware few exercises are more effective than keeping track of the phrases that turn people off and doing away with them. 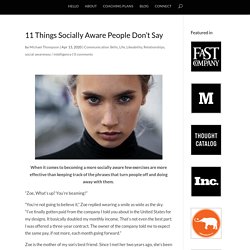 “Zoe, What’s up? You’re beaming!” “You’re not going to believe it,” Zoe replied wearing a smile as wide as the sky. “I’ve finally gotten paid from the company I told you about in the United States for my designs. It basically doubled my monthly income. Zoe is the mother of my son’s best friend. Date Night Cocktail Etiquette For The Grown-Ass Man – Combatant Gentlemen. Every single time you go on a date, consider it a try out for a potential long-term relationship, or very short-term physical relationship. 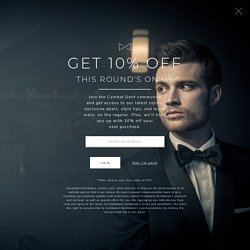 Commit a fumblerooski, and you're back to swiping furiously on Bumble and ending your nights with a solo Uber home. When it comes to dates, you're going to be judged, and you're going to be judged harshly based on performance and the eye test. Assuming you've got your wardrobe locked down (since you're on this site to begin with, we feel good about that), navigating the minefield of bachelorhood still requires a solid knowledge of what to do and what not do on a first date.

Need help figuring it all out? Say no more, we've got you. As we’ve discussed before, drinks are the ideal first date for a variety of reasons. Now that you've either met at the bar or picked her up, ditch the phone. If the bar ends up getting crowded and you've run dry, do not, I repeat do not, try to get the bartender's attention by waving your money at him/her. The hidden ways your language betrays your character - BBC Future. It’s a similar story on Twitter. 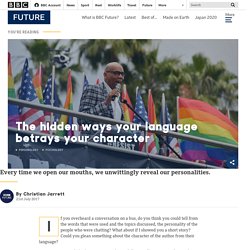 Other research has found that extroverts tend to refer to positive emotions and social situations more frequently, while high scorers in neuroticism (or emotional instability) tend to use more first-person singular pronouns, like “I” and “me”. The latter fits with the finding that those experiencing emotional turmoil use these words more liberally. How not to shake someone’s hand - BBC Future. Meanwhile, Trump does one of the most unusual parts of the whole act. 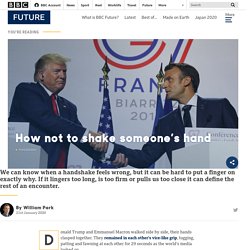 While still shaking Emmanuel Macron’s hand, he greets Brigitte in a way that is completely to be expected for two Western business people of the opposite sex. Westerners tend to default into gender-specific roles when it comes to greetings. In business, the expectation is always for men to shake hands, but when men greet women and women greet each other, cheek kissing is more often the norm. So, while the overly-familiar embrace with Macron continues, Trump is simultaneous able to kiss Brigitte in a normal way. Letter and Card Writing Etiquette and "How to" With the arrival and growth of email over recent decades, there is still something to be said for penning formal letters and cards, which are the written equivalent of classic menswear–that is, an antidote to the fleeting fashion of the day. Here’s our guide to proper etiquette when putting pen to paper. In our current digital age, past communication practices, like sending a fax or a message via snail mail, have fallen by the wayside.

And since the advent of mobile phones and text messaging, the need for formality in written communication has also languished. Still, in an age where “Thx” and “TL:DR” dominate communications, we believe that taking the time to hand-write a missive will make its recipient appreciate it all the more. When to Write a Letter or Send a Card The purpose of writing a hard-copy letter nowadays is most often personal, and mainly to express one’s sentiments.

The Handshake's Mysterious Origins. In any given year, Mental Floss publishes upwards of 5000 stories—from short news posts to in-depth lists to longform features to oral histories and everything in between. And while our readers have made their favorite stories of 2019 known, now it’s our staff’s turn. In case you missed any of them, these were our favorite stories to write, edit, read, and share with all of you over the past 12 months. 1. Man Opens Can of Beans, Finds Just One Bean. (1) Restaurant Etiquette: How to Dine Out Like a Gentleman. Restaurant Etiquette: How to Dine Out Like a Gentleman. Going out to eat is a popular activity for many people–but it can present a number of etiquette issues! Today, we’ll cover how to dine out like a gentleman without embarrassing yourself or committing any faux pas.

How Should You Behave When Dining Out? Restaurant dining presents an interesting human dynamic; similar to flying in an airplane, you’re in a public space and you have to behave in a way that you and those around you are comfortable. Dining in a restaurant requires a lot of a person’s etiquette and social skills and because of that, it’s very popular with employers to take potential employees or key leadership people out to a restaurant to see how they behave.

Let’s walk through the essential restaurant etiquette that you can apply for business dinners, celebrations, events, or dates. A Man's Guide to Etiquette. There are few words that generate less excitement in a male audience than “etiquette.” On the scale of things men like to talk about, it usually ranks somewhere between contemporary dance and nail polish. But it matters. It matters a lot, actually. Etiquette: Protocol of Introducing People. Did millennials kill the dinner party? Where do you put a napkin when getting up from the table? from Should You Still Call a Woman ‘Ma’am’? and Other Modern Etiquette Questions Answered. To say the modern world is constantly evolving and rapidly changing is an understatement, and there are certain etiquette guidelines and rules that feel… outdated. Kissing a woman’s hand when introduced, for instance, is less than charming in the 2010s.

A Gentleman’s Guide to Getting Out of a Conversation. “Shut up.” Old Etiquette Rules We Need to Bring Back. Good Manners, Cont. The Canadians have us beat. Meeting the Parents Was a Must from Outrageous Dating Etiquette Rules Your Parents Followed Gallery. First Impressions 101: How to Introduce Yourself & Others. ★ ★ ★ ★ ★ (17) ★ ★ ★ ★ ★ (25) TOP It’s a fact of life that most of us operate within a number of different social circles. Many of us will socialize with family, friends, neighbors, co-workers, and so on and often, these social circles are largely kept separate, not necessarily intentionally, of course, but simply by way of the fact that they wouldn’t have much reason to naturally come together or commingle in most circumstances. Etiquette When Attending a Performance. ★ ★ ★ ★ ★ (16) ★ ★ ★ ★ ★ (25) TOP An important aspect of a gentleman’s education and lifestyle has always been an appreciation for art and culture, which includes attending formal performances.

An opera, ballet, or classical concert not only provides the opportunity to put on some classic tailoring but also the ability to immerse oneself in an atmosphere of refinement and good taste. Etiquette: Protocol of Introducing People. Regarding western European culture. At the workplace political correctness is the rule. Meal Manners: Pace Yourself, Start and Finish with Others. Family Takes an iPad to a Restaurant. Things Got Noisy. Who's In the Wrong? There is a tiny neighborhood restaurant located beneath the offices in the 3300 block of Oak Lawn Ave., between Cedar Springs and Lemmon. This is Si Lom, and it has been slinging pad thai and scooping mango sticky rice here, in this basement dwelling, since 2012. Over the seven years that patrons have descended its concrete stairs, below the bustling street, the Thai restaurant has been unfalteringly consistent and eternally cozy. Lemongrass and coconut Tom Kha soup gets topped with leafy cilantro and glistening beads of burnt orange chili oil—a perfect opening dish.

How to Apologize Say Sorry Admit a Mistake. How to Give a Toast. The (Often Manly) History of Toasting, and Why We Should Bring It Back. How to Communicate With Your Spouse. The Importance of Good Manners. How to Be Diplomatic. How to Order Drinks When Someone Else Is Paying. Snobbism & Why You Should Not Be A Snob — Gentleman's Gazette. 50 Strict Rules the Royal Family Has to Follow. Is Rudeness Contagious?

What Happened After I Watched A Young Woman Get 'Etiquette Shamed' At The Grocery Store. The Etiquette Of Navigating A Corkage Fee. Travel - The world’s most polite country? Tipping At Bars Should Be Abolished. A Perfect Apology: The Two Ingredients That Matter Most. Stationery Guide - Handwritten Sentiments for Gentleman's. Politeness theory. If You Can't Say 'Yes,' Don't Say Anything At All. 76 Incredibly Accurate Pet Peeves That Will Drive. You. Nuts.