Earthquake Hazards Program. This map shows where the strongest earthquakes are expected to strike. Munmun Mukherjee is a good patient. 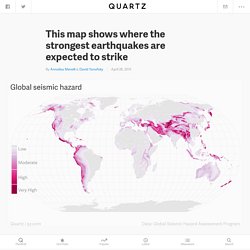 She lies quiet on the white stone delivery table of the government hospital in Kolkata, but for an occasional low moan. Even this is muted, the edge of her voice flattened, as if she knows that she needs to be on her best behaviour. A slim, dusky woman, she looks tidy even in her tired, crumpled nightie. It is late January, and the reluctant Kolkata winter has already slipped away. Why Earthquake-Resistant Cell Phone Towers Are Worth the Money - Pacific Standard. Last week, Los Angeles became the first American city to require that new cell phone towers be built to withstand an earthquake. 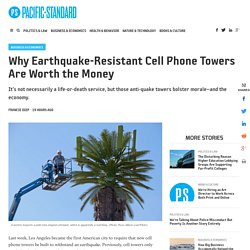 Previously, cell towers only needed to be able to resist falling (and killing people) during a quake, the Los Angeles Times reports. This new law is a reflection of changing times. The last major California earthquake was in the Northridge neighborhood of Los Angeles, in 1994. Most of the general public didn't have cell phones then, nor did they rely much on the Internet. But around the world, other regions' more recent quakes offer examples of how profoundly California's next tremblor could affect mobile service: What do people tend to use cell phones for after an earthquake?

Keeping—or returning—mobile service is also important to restoring a region's economy after a disaster. Advertisement — Continue reading below. The Earthquake That Will Devastate Seattle. When the 2011 earthquake and tsunami struck Tohoku, Japan, Chris Goldfinger was two hundred miles away, in the city of Kashiwa, at an international meeting on seismology.

As the shaking started, everyone in the room began to laugh. Earthquakes are common in Japan—that one was the third of the week—and the participants were, after all, at a seismology conference. Then everyone in the room checked the time. Seismologists know that how long an earthquake lasts is a decent proxy for its magnitude.

The 1989 earthquake in Loma Prieta, California, which killed sixty-three people and caused six billion dollars’ worth of damage, lasted about fifteen seconds and had a magnitude of 6.9. When Goldfinger looked at his watch, it was quarter to three. 1 year after San Francisco Bay’s biggest quake in decades. The 6.0 magnitude quake that woke the placid wine town of Napa at 3:20 a.m. on Aug. 24, 2014 was the strongest quake to hit the San Francisco Bay area in a quarter-century. 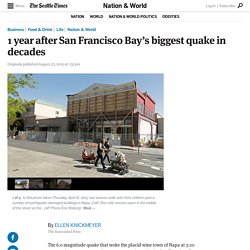 It killed one person and injured 200 as bricks and furniture – and wine bottles – toppled onto sleeping families. One year later, the signs of lingering damage are minimal – a wobbly winery building here, a shrouded, Victorian-era downtown facade awaiting repairs there. The Great Quake and the Great Drowning. In the year 1700, on January 26, at 9:00 at night, in what is now northern California, Earthquake was running up and down the coast. 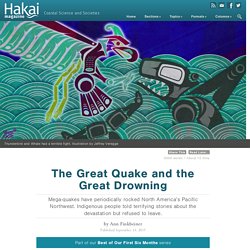 The Aftershocks — Matter. 2011 Tōhoku earthquake and tsunami. The 2011 earthquake off the Pacific coast of Tōhoku (東北地方太平洋沖地震, Tōhoku-chihō Taiheiyō Oki Jishin?) 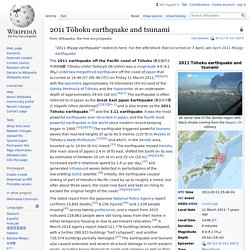 Was a magnitude 9.0 (Mw) undersea megathrust earthquake off the coast of Japan that occurred at 14:46 JST (05:46 UTC) on Friday 11 March 2011,[2][3][8] with the epicentre approximately 70 kilometres (43 mi) east of the Oshika Peninsula of Tōhoku and the hypocenter at an underwater depth of approximately 30 km (19 mi).[2][9] The earthquake is also often referred to in Japan as the Great East Japan earthquake (東日本大震災, Higashi nihon daishinsai?) [10][11][12][fn 1] and also known as the 2011 Tohoku earthquake,[13] and the 3.11 earthquake. Earthquake[edit] Connecting the Last Mile: the Role of Communications in the Great East Japan Earthquake by Internews Europe. History, Travel, Arts, Science, People, Places. Japan Earthquake - April 2016. Nepal Earthquake - April 2015. Stark Photos Show Nepal’s Heritage Sites Before and After the Quake. Historical Monuments after the earthquake at Kathmandu Durbar Square. 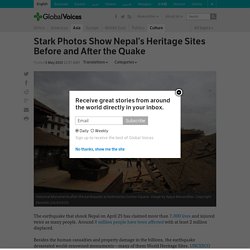 Image by Ajaya Manandhar. Copyright Demotix (25/4/2015) The earthquake that shook Nepal on April 25 has claimed more than 7,000 lives and injured twice as many people. Around 8 million people have been affected with at least 2 million displaced. This Interactive Map Shows Nepal Before and After the Earthquake. Why women are more at risk than men in earthquake-ravaged Nepal. Natural disasters are thought to be indiscriminate killers—but is that strictly true? 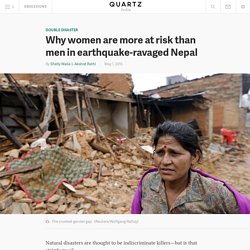 It turns out disasters affect women much more than men. A 2007 study by researchers at the London School of Economics and the University of Essex found that between 1981 and 2002, natural disasters in 141 countries killed significantly more women than men, and that the worse the disaster, the bigger the gender disparity. The latest figures from Nepal show that among the 1.3 million affected by the earthquake, about 53% are female—a small but not yet statistically significant bias. That might soon change. According to the Women Resilience Index, a metric developed to assess a country’s capacity to reduce risk in disaster and recovery for women, Nepal scores a paltry 45.2 out of 100. And lessons from previous disasters show that the bias affecting women can worsen in post-disaster relief.

Is biology destiny? There are many factors that contribute to this bias—both social and biological. Was the Nepal earthquake twice as big as we thought? This item has been corrected. 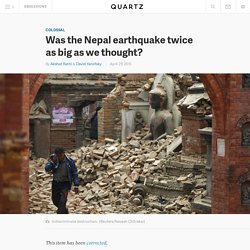 Gone: The Earthquake in Nepal. Gone. 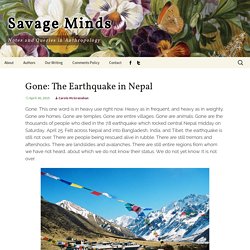 This one word is in heavy use right now. An Oral History of Langtang, the Valley Destroyed by the Nepal Earthquake. This scene is based on earthquake footage taken in Langtang Valley by American trekker Corey Ascolani. Illustration by Owen Freeman On April 25 of this year, a magnitude 7.8 earthquake hit Nepal at 11:56 a.m., local time. Half a million homes across the country were leveled and more than 8,500 people were killed, including 19 climbers and Sherpas who died in an avalanche that roared through Mount Everest Base Camp. How Not to Report on an Earthquake. Photo As of Tuesday morning, exactly three days have passed since a 7.8-magnitude earthquake shook Nepal, killing thousands and leaving millions in need of help. In disaster response, the end of the first 72 hours is often considered an inflection point: the unofficial moment when the most acute phase passes, the odds of finding trapped survivors plunge and the relief effort tends to really pick up steam.

Three days into a crisis, roads and airports are often reopening, and outside responders and journalists are arriving in droves. The decisions made at this time can determine the course of the response. A misstep now can have ramifications lasting years, even decades. I know this because I lived through a moment of just this sort five years ago, in Haiti. The Psychology of Inevitable Earthquakes. From remote Nepal, a warning against ahistorical disaster relief. Editor’s note: David Citrin is a medical anthropologist who has lived and worked in remote western Nepal since 2001. He was there when the earthquake hit and offers advice on how to make this recovery response more lasting and effective. By David Citrin, special to Humanosphere.