The Counted: people killed by police in the United States in 2015 – interactive. San Diego Cops Keep Forgetting to Turn Their Body Cameras On Before Killing People. San Diego, CA — All patrol officers employed by the San Diego Police Department are now required to carry body cameras – but they avoid falling prey to the dreaded “YouTube Effect” by simply refusing to activate them when they could be of greatest use. 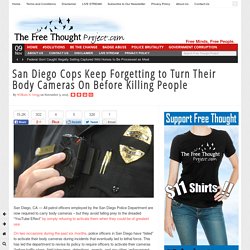 On two occasions during the past six months, police officers in San Diego have “failed” to activate their body cameras during incidents that eventually led to lethal force. This has led the department to revise its policy to require officers to activate their cameras “before traffic stops, field interviews, detentions, arrests, and any other `enforcement related contacts’ – as long as it’s safe to do so,” reports the San Diego Union Tribune. The “safety” exception, however, offers wide latitude for officers to avoid recording potentially lethal encounters. That request offers a powerful, if tacit, indictment of the discipline and professionalism of the San Diego PD’s rank and file.

No-Knock Raids. Excited delirium deaths in police custody: Diagnosis or cover-up? Photo by Lucy Nicholson/Reuters When Natasha McKenna was in police custody at the Fairfax County, Virginia, jail in February, the mentally ill woman was restrained by six deputies who, unable to subdue her, shocked her with a Taser. 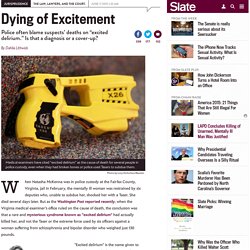 She died several days later. But as the Washington Post reported recently, when the Virginia medical examiner’s office ruled on the cause of death, the conclusion was that a rare and mysterious syndrome known as “excited delirium” had actually killed her, and not the Taser or the extreme force used by six officers against a woman suffering from schizophrenia and bipolar disorder who weighed just 130 pounds. Dahlia Lithwick writes about the courts and the law for Slate. The Pernicious Myth Of "If You Can Speak You Can Breathe" : ProtectAndServe. This is a phrase I heard Peter King say in the wake of Eric Garner's death and I feel it's something that everyone in our profession needs to be aware of. 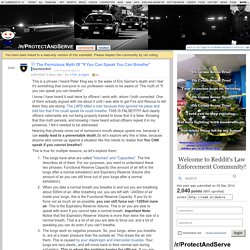 The myth of "If you can speak you can breathe". I know I have heard it said twice by officers I work with, whom I both corrected. One of them actually argued with me about it until I was able to get Fire and Rescue to tell them they are wrong. The LAPD killed a man because they ignored his pleas and told him that if he could speak he could breathe. THIS IS FALSE!!!!!!!!! Hearing that phrase come out of someone's mouth always upsets me, because it can easily lead to a preventable death.So let's explore why this is false, because anyone who comes up against a situation like this needs to realize that You CAN speak if you cannot breathe!! This is true for multiple reasons, so let's explore them: The lungs have what are called "Volumes" and "Capacities". There’s never been a safer time to be a cop — or a more dangerous time to be a criminal.

New FBI data released today finds that the number of law enforcement officers killed in the line of duty -- that is, killed with felonious intent by a suspected criminal -- plummeted to 27 in 2013, its lowest level in decades. 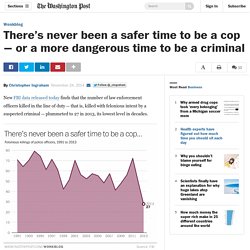 Notably, the sharp decline in officer fatalities comes even as the number of justifiable homicides by officers, which the FBI defines as "the killing of a felon by a law enforcement officer in the line of duty," climbed to its highest level since 1994 last year. In short, it's getting safer to be a cop, and more dangerous to be a criminal. There's something to cheer about here - in general, a society might prefer to have living cops and dead felons, rather than vice-versa. But there's a good deal to worry about, too. This year there have been numerous high-profile tragedies involving cops shooting unarmed civilians. Smart policing requires an element of trust between officers and the community they serve. Congress awaits 'monumental' police reform as mandatory kill count advances. Washington lawmakers have credited a Guardian investigation to count killings by police with building momentum on long-stalled law-enforcement reform and renewed efforts to force the US government to establish a comprehensive database of officers’ lethal use of force. 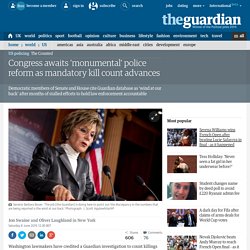 As members of Congress sought to turn a patchwork of proposals into a progressive agenda for action, authors of Democratic proposals in both the Senate and House to demand an official US record of police-involved fatalities said the journalistic project had been valuable in filling a void of governmental accountability – and in advancing new legislation. “Let me just say on the record: the job you are doing here to point out the discrepancy in the numbers that are being reported is the wind at our back,” Senator Barbara Boxer of California said in an interview. “These statistics in the Guardian’s study will be most helpful in making the case,” said Representative Steve Cohen of Tennessee. A Hail of Bullets, a Heap of Uncertainty. By the numbers: US police kill more in days than other countries do in years : Bad_Cop_No_Donut.

Police shooting too many Americans (Opinion) Frida Ghitis: Police in United States are killing far too many peopleLack of official statistics on shootings worrying, she saysGhitis: Police should rethink shoot-to-kill policy Editor's note: Frida Ghitis is a world affairs columnist for the Miami Herald and World Politics Review. 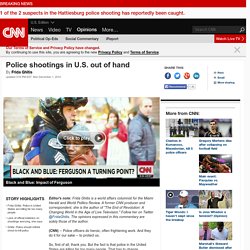 A former CNN producer and correspondent, she is the author of "The End of Revolution: A Changing World in the Age of Live Television. " Follow her on Twitter @FridaGhitis. The opinions expressed in this commentary are solely those of the author. (CNN) -- Police officers do heroic, often frightening work. So, first of all, thank you. Frida Ghitis In the aftermath of Michael Brown's killing in Ferguson, there has been much discussion about race relations, the justice system, gun ownership and other factors that may have played a role in the incident. Fatal police shootings. The table below shows the number of people who have died as a result of police shootings in England & Wales since 1990, grouped by calendar year. 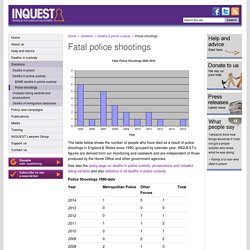 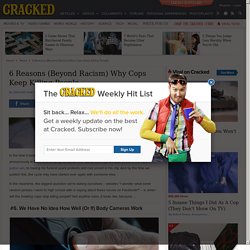 And by the time we publish this, the cycle may have started over again with someone else. In the meantime, the biggest question we're asking ourselves -- besides "I wonder what some random jackass I went to high school with is saying about these issues on Facebook? " -- is when will the freaking cops stop killing people? Not anytime soon, it looks like, because ... #6. George Frey/Getty Images News/Getty Images "He said, she said" disputes are notoriously difficult to sort out, particularly when one party is dead. Nbcnews.comIf you don't care about police brutality, look at it this way: We'd be one step closer to Robocop. #5.