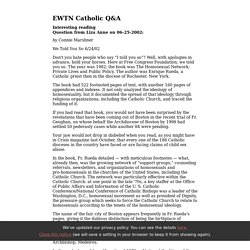 I See Fire. Hilary White. Book to research. Unhealthy Devotions - Astral Projection. Astral projection is a technique used by witches and other occult members to travel in the spirit realm. 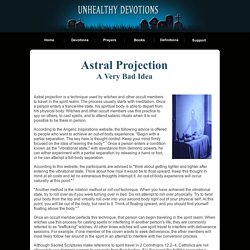 The process usually starts with meditation. Once a person enters a trance-like state, his spiritual body is able to depart from his physical body. Witches and other occult members use this practice to spy on others, to cast spells, and to attend satanic rituals when it is not possible to be there in person. The Rosary. Brown Scapular. Newly revealed vision of St. Pope John Paul: Islam will invade Europe. We are witnessing St. John Paul II’s prophesy of an ‘anti-Church’: Catholic priest. ROME, May 18, 2017 (LifeSiteNews) -- St. 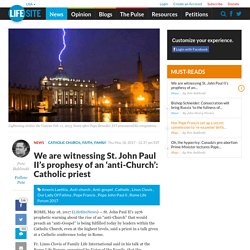 John Paul II’s 1976 prophetic warning about the rise of an “anti-Church” that would preach an “anti-Gospel” is being fulfilled today by leaders within the Catholic Church, even at the highest levels, said a priest in a talk given at a Catholic conference today in Rome. Fr. On Dietrich Von Hildebrand. 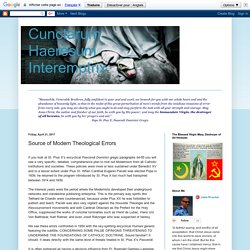 Pius X's encyclical Pascendi Dominici gregis paragraphs 44-55 you will see a very specific, detailed, comprehensive plan to root out Modernism from all Catholic institutions and societies. These policies were more or less sustained under Benedict XV and to a lesser extent under Pius XI. When Cardinal Eugenio Pacelli was elected Pope in 1939, he returned to the program introduced by St. The Sexual Revolution Turns Ugly. How many intellectuals have come to the revolutionary party via the path of moral indignation, only to connive ultimately at terror and autocracy?

∼ Raymond Aron The Sexual Revolution is now out of control. Initially promising freedom, like all revolutions, it has entered something like its Reign of Terror phase and is devouring its own children. As with other revolutions, it is not because the revolutionaries enjoy broad popular support; it is because civic and religious leaders are confused, divided, and cowed into silence. The Remnant Newspaper - Can the Church Depose an Heretical Pope? “Computer geek” takes one more step toward sainthood. On Thursday, November 24, 2016, Cardinal Angelo Scola closed the diocesesan phase in the canonization process for Carlo Acutis, an Italian boy who died October 12, 2006, at age 15, of leukemia. 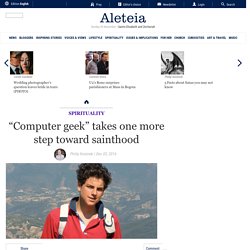 He was a well-loved teenager who devoted himself to prayer and daily Mass as well as computer programming, film editing, website creation, editing and layout of comics. According to the website for his canonization process, “Carlo was gifted at anything related to computers so that his friends, and the adults with computer engineering degrees, considered him a genius. Everyone was amazed by his ability to understand the computer secrets that are normally accessible only to those who have completed university.”

Would be Saints? “Our faith in the indefectibility of the Church is soon going to be tested and good people will legitimately choose different sides.” Last night I had a hard dream that I was part of a firefighting crew, the kind that tries to control wildfires, such as dangerously erupt especially in time of drought. 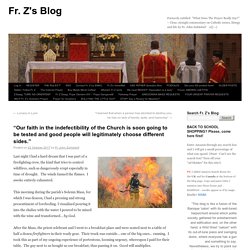 The winds fanned the flames. I awoke entirely exhausted. Father Rutler on death penalty. Meek, Like a Warhorse. The Bible has been translated into English for hundreds of years by scholars and theologians. 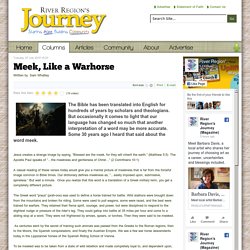 But occasionally it comes to light that our language has changed so much that another interpretation of a word may be more accurate. Some 30 years ago I heard that said about the word meek. Why the Light of Purity is Needed to See the Mystery of Sex. Simplicity, sincerity and humility — and especially reverence — are essential to true purity. 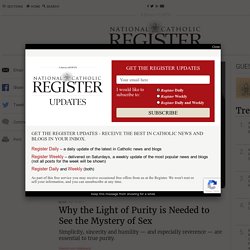 The following essay was excerpted from Dietrich von Hildebrand’s In Defense of Purity, which first appeared in 1927 and was released in a new English edition on Oct. 17, 2017. The new edition features a new foreword by Alice von Hildebrand, who writes, “This is what he set out to do in In Defense of Purity: to explore purity as a positive reality and only in light of its beauty to describe its contrary.”

The excerpt appears here with permission of the Hildebrand Project. The pure man perceives the mystery of sex. He perceives its depth, its seriousness, its intimacy — whether because, temperamentally awake to these qualities, he apprehends intuitively the character of sex, or because, temperamentally unaware of them, he knows it rather from the outside. Fraternus. Romans 1 - Is It a Prophetic Interpretation of Reality for Our Times? - Community in Mission. We continue to read from the Letter to the Romans in daily Mass. 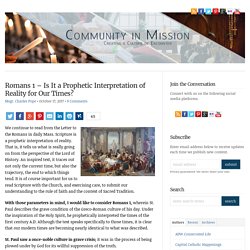 Scripture is a prophetic interpretation of reality. That is, it tells us what is really going on from the perspective of the Lord of History. An inspired text, it traces out not only the current time, but also the trajectory, the end to which things tend. It is of course important for us to read Scripture with the Church, and exercising care, to submit our understanding to the rule of faith and the context of Sacred Tradition. With those parameters in mind, I would like to consider Romans 1, wherein St. Kevin Williams (Saint Ignatius of Antioch) The Eucharistic miracle of Sokolka. Every day, on the altars of Catholic churches around the world, the greatest miracle possible takes place: the transformation of bread and wine into the true Body and Blood of Christ.

Nonetheless, when we receive Communion, we can only touch its true nature with our faith, because our senses only perceive bread and wine, physically unaltered by the consecration. What are the implications, then, of the Eucharistic event in Sokolka, Poland? It took place on Sunday, October 12, 2008, two weeks after the beatification of Servant of God Fr. Michael Sopocko. Regina Prophetarum. Veritas Caritas – Truth In Charity. Tolkien's Long Defeat - Glory to God for All Things.

“Actually I am a Christian,” Tolkien wrote of himself, “and indeed a Roman Catholic, so that I do not expect ‘history’ to be anything but a ‘long defeat’— though it contains (and in legend may contain more clearly and movingly) some samples or glimpses of final victory” (Letters 255). History as a long defeat – I can think of nothing that is more anti-modern than this sentiment expressed by J.R.R. Tolkien. Leila Miller. Living the Beatitudes: Confronted by Truth by Rebekah Domer.

Continuing her series on the Beatitudes, Rebekah Domer begins to discuss the last beatitude today. Catch up on the rest of her posts here. Who is persecuted for righteousness’ sake in America these days? I found myself wondering as I pondered the final Beatitude of Christ which states, “Blessed are they who are persecuted for the sake of righteousness, for theirs is the kingdom of heaven” (Matt. 5:10).

Do Not Be Deceived: Christ Forbids Homosexual Acts, and the Church Cannot Teach Otherwise. ASK FATHER: Corruption, sodomy, drugs, infidelity… How can we trust anything from Rome? Wherein Fr. Z rants. Sermon by St. Leonard of Port Maurice. Saints Feast Day October 27th. Blowing the Whistle on Liberal Hypocrites - Standing on my Head.

What Catholics Can Learn About Islam from a Former Muslim. Who Will Rescue the Lost Sheep of the Lonely Revolution? St. Ignatius. Refuting the Protestant Errors of Private Interpretation of Holy Scripture. The Remnant Newspaper - Sky to Go Dark in August, 2017. We are witnessing St. John Paul II’s prophesy of an ‘anti-Church’: Catholic priest.