Questions & Answers Concerning Indulgences. Sale of Indulgences by Hoblein the Younger As soon as the coin in the coffer rings,The soul from purgatory springs. 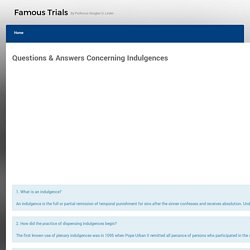 --John Tetzel, Dominican indulgence vendor 1. What is an indulgence? An indulgence is the full or partial remission of temporal punishment for sins after the sinner confesses and receives absolution. 2. The first known use of plenary indulgences was in 1095 when Pope Urban II remitted all penance of persons who participated in the crusades and who confessed their sins. 3. In Luther's time, the pope delegated the privilege of dispensing indulgences. Leo X, the pope in 1517, needed funds to complete the building of St. *The items in Frederick's collection included bones, teeth, hairs, and pieces of cloak and even a girdle from various saints. 4. Listen now, God and Peter call you. 5. 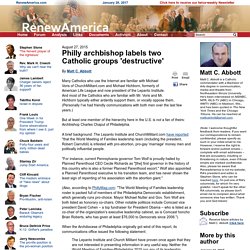 Abbott Many Catholics who use the Internet are familiar with Michael Voris of ChurchMilitant.com and Michael Hichborn, formerly of American Life League and now president of the Lepanto Institute. And most of the Catholics who are familiar with Mr. Voris and Mr. Hichborn typically either ardently support them, or vocally oppose them. But at least one member of the hierarchy here in the U.S. is not a fan of theirs: Archbishop Charles Chaput of Philadelphia.

A brief background: The Lepanto Institute and ChurchMilitant.com have reported "that the World Meeting of Families leadership team (including the president, Robert Ciarrufoli) is infested with pro-abortion, pro-gay 'marriage' money men and politically influential people. Dr. Ben Carson & Pope Exposed USA & EU One World Government Plans. POPE FRANCIS (Jorge Bergoglio) - What the media has hidden from you (Part1) Jesuit Extreme Oath of Induction. "When a Jesuit of the minor rank is to be elevated to command, he is conducted into the Chapel of the Convent of the Order, where there are only three others present, the principal or Superior standing in front of the altar. 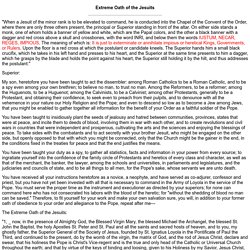 On either side stands a monk, one of whom holds a banner of yellow and white, which are the Papal colors, and the other a black banner with a dagger and red cross above a skull and crossbones, with the word INRI, and below them the words IUSTUM, NECAR, REGES, IMPIOUS. Catholicism - Which Queen of Heaven ? Part 1 - Doc Marquis. Exorcist Malachi Martin interview (3 hours) topic: demonic possession and exorcism. 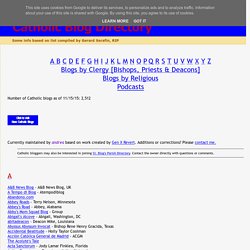 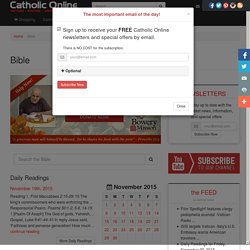 Catholic hymn book : a collection of hymns, anthems, etc., for all holydays of obligation and devotion throughout the year ; selected from approved so. Church history - Was Catholicism the first denomination? - Christianity Stack Exchange. Disclaimer #1: This answer is, in no way, intended to undercut or replace Affable Geek’s very well presented (and fun) overview of denominational history...or any of the other answers. 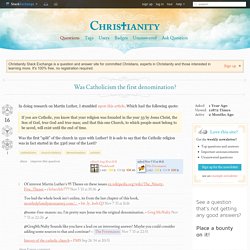 This is simply an attempt to “flesh out” the Catholic Church’s claim to fame - namely Apostolic/Magisterial Succession – by presenting a very brief paper trail of Patristic writings supporting this claim. Please consider the following as nothing more than an extended “Catholic” footnote. The word catholic is worn as a hat by many different churches and denominations. I’m not intending to define the “Catholic Church” (generic or specific) as much as I am the historical Catholic Hierarchy (a. k. a. Apostolic Succession). Roman Catholic Church - A Brief History. By Mary Fairchild As the apostles of Jesus Christ spread the gospel, they provided the beginning structure for the early Christian Church. 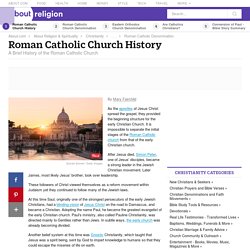 It is impossible to separate the initial stages of the Roman Catholic church from that of the early Christian church. After Jesus died, Simon Peter, one of Jesus' disciples, became a strong leader in the Jewish Christian movement. Later James, most likely Jesus' brother, took over leadership. These followers of Christ viewed themselves as a reform movement within Judaism yet they continued to follow many of the Jewish laws. At this time Saul, originally one of the strongest persecutors of the early Jewish Christians, had a blinding vision of Jesus Christ on the road to Damascus, and became a Christian.

Another belief system at this time was Gnostic Christianity, which taught that Jesus was a spirit being, sent by God to impart knowledge to humans so that they could escape the miseries of life on earth. Every Roman Catholic Must See This! Why Is The Pope’s Mitre Shaped Like A Fish? By Gregg Prescott, M.S.Editor, In5D.com. 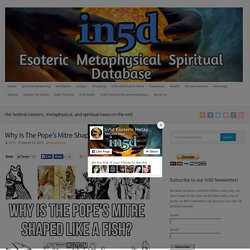 Facts about the Roman Catholic Inquisitions. Les Cathares - The Crusade Against the Grail. Occitan flag in monsegur village. 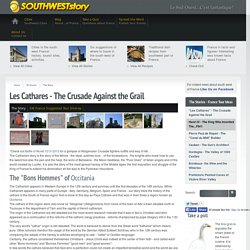 Melkite Greek Catholic Church Information Center Patriarch (Batriyark) of the Patriarchate (See) of Antioch. Vatican Secrets by Jordan Maxwell. The Catholic Liturgy is a Satanic Ritual - the Evidence. The Little Book of Catholic Liturgy The sons of God are under constant attack by Satan and his forces – attacked by ‘flesh and blood’ verbally, mentally, emotionally and spiritually. 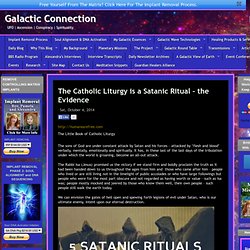 It has, in these last of the last days of the tribulation under which the world is groaning, become an all-out attack. The Rabbi Isa (Jesus) promised us the victory if we stand firm and boldly proclaim the truth as it had been handed down to us throughout the ages from him and those who came after him – people who lived or are still living not in the limelight of public accolades or who have large followings but people who were for the most part obscure and not regarded as having worth or value – such as Isa was; people mostly mocked and jeered by those who know them well, their own people – such people still walk the earth today.

We can envision the gates of hell open and spewing forth legions of evil under Satan, who is our ultimate enemy, intent upon our eternal destruction. The Apocalyptic Pope - Freeman Fly on The Pope, The Anti-christ and World War 3. Evidence That the Vatican Is Planning To Rule Jerusalem? A Picture of The Pope Giving the Sign of Baphomet. Saved by the Sword: The Catholic Church’s Legacy of Torture, Bloodshed and Scandal.