Tehillim - Psalms - Chapter 72 - Tanakh Online - Torah - Bible. Kabbalah Library - Bnei Baruch Kabbalah Education & Research Institute. What is the Meaning of Shabbat? Anne Catherine Emmerich - Aquinas Study Bible. WHOEVER compares the following meditations with the short history of the Last Supper given in the Gospel will discover some slight differences between them. 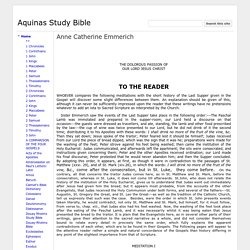 An explanation should be given of this, although it can never be sufficiently impressed upon the reader that these writings have no pretensions whatever to add an iota to Sacred Scripture as interpreted by the Church. 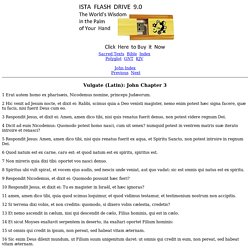 Hermetics. Apochryphal. Freed Syrian priest says imprisonment was way to carry cross of Jesus. BEIRUT (CNS) -- When a man dressed head-to-toe in black entered the room where Father Jacques Mourad was being held by the Islamic State, the Syriac Catholic priest thought his time to become a martyr had come. 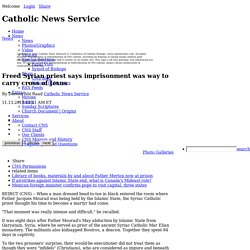 "That moment was really intense and difficult," he recalled. It was eight days after Father Mourad's May abduction by Islamic State from Qaryatain, Syria, where he served as prior of the ancient Syriac Catholic Mar Elian monastery. The militants also kidnapped Boutros, a deacon. Together they spent 84 days in captivity. To the two prisoners' surprise, their would-be executioner did not treat them as though they were "infidels" (Christians), who are considered as impure and beneath fanatic Muslims: The man in black shook their hands, greeted them with "salam alaykoum" (peace be with you) and asked questions as if he would like to get acquainted. 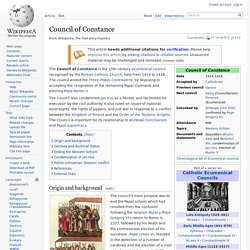 The council ended the Three-Popes Controversy, by deposing or accepting the resignation of the remaining Papal claimants and electing Pope Martin V. Origin and background[edit] Jewish explanation of God "trying" to kill Moses - Catholic Answers Forums. Here's another commentary I read by James Kugel in his book "How to Read the Bible". 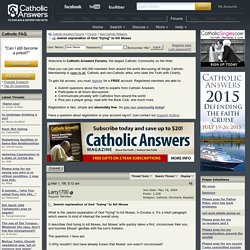 " - Mishna, Nedarim 3:11 This was a relevant lesson, since Jews had been pressured, at various times, to abandon circumcision. But why would Moses delay? March 2012. Since the meeting on March 16, 2012, with Cardinal William Levada, Prefect of the Congregation for the Doctrine of the Faith, Bishop Bernard Fellay, Superior General of the Society of St. 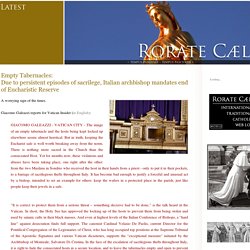 Pius X, has urgently been inviting the faithful to redouble their fervor in prayer and their generosity in making sacrifices during these Holy Days of Lent and in the weeks that will follow the solemnity of Easter, that the Divine Will may be done, and it alone, after the example of Our Lord Jesus Christ in the Garden of Olives: non mea voluntas, sed tua fiat (Luke 22:42). The Rosary Crusade that started on Easter 2011 and is scheduled to end on Pentecost 2012 is proving more than ever to be indispensable. New Perspectives on the Man of Sorrows. Charismatic conference to celebrate gifts of Holy Spirit - Catholic Philly. Posted in Local News, on March 6th, 2015 By Elizabeth Fisher The Catholic Charismatic Renewal group in the Philadelphia Archdiocese will host its 35th annual conference on Saturday, March 28, 9 a.m. to 5 p.m. at Conwell-Egan Catholic High School, 611 Wistar Road in Fairless Hills, Bucks County. 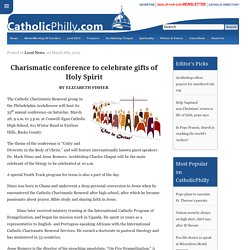 Opus Dei - What do Roman and Jewish sources tell us about Jesus? 23 Questions & answers about Jesus Christ, prepared by a team of catholic theologians of the University of Navarre. 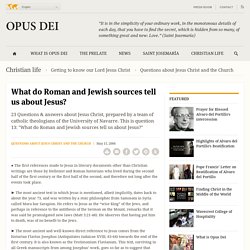 This is question 13: "What do Roman and Jewish sources tell us about Jesus? " Catholic Encyclopedia (1913)/Liturgical Use of Water - Wikisource, the free online library. Besides the holy water which is used by the Church in so many of her rites of blessing, and besides the water employed in the washing of feet and hands (see WASHING OF FEET AND HANDS) and in the baptismal font (q.v.), water has its recognized place in the ritual of every Mass and in a certain number of pontifical and extraordinary offices which include some form of washing. 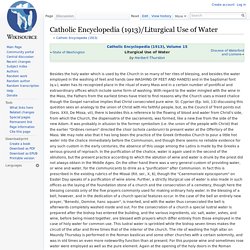 With regard to the water mingled with the wine in the Mass, the Fathers from the earliest times have tried to find reasons why the Church uses a mixed chalice though the Gospel narrative implies that Christ consecrated pure wine. St. Catholic Encyclopedia (1913) - Wikisource, the free online library. CEEOL Studia Universitatis Babes-Bolyai - Theologia Catholica Latina , Issue 1 /2014. St. Michael's [Brief History of the Ukrainian Catholic Church] Links. Links COLLECTIONS of LINKSNumerous pages exist which offer a wide range of links; the following are particularly useful: The Ecumenical Patriarchate has a page on the Web. 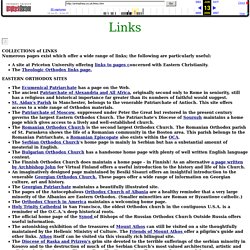 The ancient Patriarchate of Alexandria and All Africa, originally second only to Rome in seniority, still has a religious and historical importance far greater than its numbers of faithful would suggest. St. Aidan's Parish in Manchester, belongs to the venerable Patriarchate of Antioch. Access to a rich collection of materials on the Armenian Apostolic Church is offered by SAIN.Another rich and diverse site, icluding an excellent set of pages on the Armenian Patriarchate of Jerusalem is maintained by Hye Etch. Catholic Audio Books and Podcasts. An Error Occurred Setting Your User Cookie. Christianity: Good for the Jews? Examining the state of contemporary Christendom in an article first published January 5, 2012, Elliot Jager asks whether Jews have an interest in seeing Christianity thrive—and answers yes.

—The Editors On a sun-drenched day during the week before Christmas, Jerusalem's Church of the Holy Sepulchre was crowded with pilgrims from Nigeria. They were taking turns kneeling and praying at a marker on the spot where, sacred history has it, Jesus was crucified, entombed, and resurrected. (Other Christians consider the holy place to be the nearby Garden Tomb.) Back in Nigeria on Christmas Day, a wave of murderous bombings by Muslim extremists hit several churches. Free Books : Download & Streaming : eBooks and Texts. The Internet Archive and Open Library offers over 6,000,000 fully accessible public domain eBooks. This includes a special modern collection of over 500,000 eBooks for users with print disabilities, and a very interesting curated, modern collection for the world at large. You can browse, read and borrow fascinating contemporary materials at OpenLibrary.org.

Profile The story of how Dr. David Appleby came to Thomas Aquinas College is one of how the study of history can be a road to the great books and the Catholic faith. Dr. The role of corpus in the Eucharistic theology of Paschasius Radbertus. Abstract: Paschasius Radbertus and Ratramnus of Corbie were two ninth century monks who each wrote treatises on the topic of the Eucharist—both with the same title, De corpore et sanguine Domini. During the sixteenth century Reformation an historical narrative and interpretation was established which posited Paschasius and Ratramnus as bitter rivals in a eucharistic controversy. Understanding the Eucharist - The Real Presence: Christ's Body.

By Carol Breslin Nearly every catechism or commentary on the Real Presence of Jesus Christ in the Eucharist informs us that it is the Body, Blood, Soul and Divinity of Jesus Christ. Since Vatican II there has been so much emphasis put on the Eucharist in relation to the Mystical Body of Christ that many have lost sight of the fact that it is Christ’s real Body and real Blood as well as His Soul and Divinity that comes to every altar at the moment of consecration. Christ's Presence in the Eucharist. Church Fathers and Transubstantiation. Church Fathers on Transubstantiation. When Aachen was the centre of Europe - and Charlemagne ruled the known world.

Photo: Landesmuseum Zürich A UNESCO World Heritage Site since 1978, Aachen (Aix-la-Chapelle) will this summer become the focus of European attention.