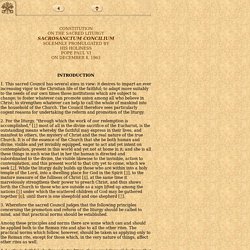 This sacred Council has several aims in view: it desires to impart an ever increasing vigor to the Christian life of the faithful; to adapt more suitably to the needs of our own times those institutions which are subject to change; to foster whatever can promote union among all who believe in Christ; to strengthen whatever can help to call the whole of mankind into the household of the Church. The Council therefore sees particularly cogent reasons for undertaking the reform and promotion of the liturgy. 2. For the liturgy, "through which the work of our redemption is accomplished," [1] most of all in the divine sacrifice of the Eucharist, is the outstanding means whereby the faithful may express in their lives, and manifest to others, the mystery of Christ and the real nature of the true Church. 3. Among these principles and norms there are some which can and should be applied both to the Roman rite and also to all the other rites. 4. 1. 5. Tutorial: Palm Sunday Cross. 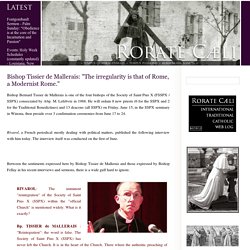 M. Lefebvre in 1988. He will ordain 8 new priests (6 for the SSPX and 2 for the Traditional Benedictines) and 13 deacons (all SSPX) on Friday, June 15, in the SSPX seminary in Winona, then preside over 3 confirmation ceremonies from June 17 to 24.Rivarol, a French periodical mostly dealing with political matters, published the following interview with him today. The interview itself was conducted on the first of June.

Between the sentiments expressed here by Bishop Tissier de Mallerais and those expressed by Bishop Fellay in his recent interviews and sermons, there is a wide gulf hard to ignore. THE OTTAVIANI INTERVENTION. The Ottaviani Intervention: A Critical Study of the New Mass Written by Alfredo Cardinal Ottaviani and Antonio Cardinal Bacci and a Group of Roman Theologians Editor's Note: The New Order of Mass was introduced on April 4, 1969. 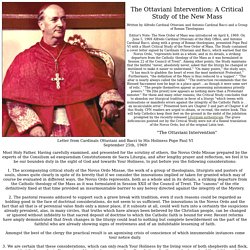 On June 5, 1969 Alfredo Cardinal Ottaviani of the Holy Office, and Antonio Cardinal Bacci, along with a group of Roman theologians, presented Pope Paul VI with a Short Critical Study of the New Order of Mass. The Study contained a cover letter signed by Cardinals Ottaviani and Bacci, which warned that the Novus Ordo, "represents both as a whole, and in its details, a striking departure from the Catholic theology of the Mass as it was formulated in Session 22 of the Council of Trent".

Among other points, the Study maintains that the faithful "never, absolutely never, asked that the liturgy be changed or mutilated to make it easier to understand. "

Mary, Our Mother. The Catholic Gentleman. The Resistance. Fr. Gregory Hesse. St. Joseph. Rosaries. Missals. The Liturgical Year PDFs. These files were scanned through a copy from Loreto Press with permission. 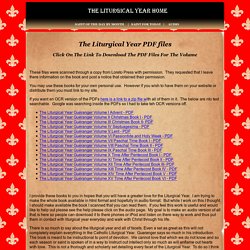 They requested that I leave there information on the book and post a notice that obtained their permission. You may use these books for your own personal use. However if you wish to have them on your website or distribute them you must link to my site. If you want an OCR version of the PDFs here is a link to a zip file with all of them in it. The below are nto text searchable. I provide these books to you in hopes that you will have a greater love for the Liturgical Year. The Lamentations of Jeremiah, Jeremias. Free Traditional Catholic Books - Catholic Tradition - Traditional Catholic Reading. Thanks to technology, and perhaps due to Christianity’s low status in our modern liberal age, there is a fantastic treasure trove of good, traditional Catholic books available for free or near-free. 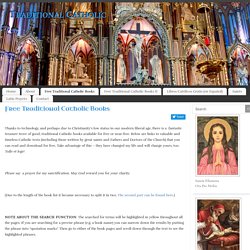 Below are links to valuable and timeless Catholic texts (including those written by great saints and Fathers and Doctors of the Church) that you can read and download for free. Take advantage of this – they have changed my life and will change yours, too. Tolle et lege! Please say a prayer for my sanctification. May God reward you for your charity. (Due to the length of the book list it became necessary to split it in two. Catholic life, path to holiness The Imitation of Christ (Thomas a Kempis) – pdf, text, audio; or pdf here and here Uniformity with God’s Will (St. Humility of Heart (Fr. The Way of Salvation and of Perfection (St.

Abandonment to Divine Providence (Jean-Pierre de Caussade) – pdf, text, audio; or pdf here Trustful Surrender to Divine Providence (St. Catholicism and Yoga: What Does the Church Say? 55 Maxims of the Christian Life - Fr. Thomas Hopko - Holy Cross Orthodox Church. The Catholic Dogma of Infallibility. When the Roman Pontiff speaks EX CATHEDRA...he possesses, by the divine assistance promised to him in blessed Peter, that infallibility which the divine Redeemer willed his Church to enjoy in defining doctrine concerning faith or morals. 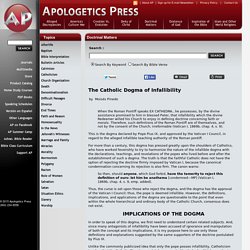 Therefore, such definitions of the Roman Pontiff are of themselves, and not by the consent of the Church, irreformable (Vatican I, 1869b, chap. 4, s. 9).