In “Dear Abby” Abortion Discussion, Catholic Readers Distort How the Church Values Mothers. Thank you for your interest in Patheos newsletters! 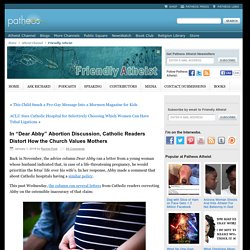 Please enter your email address below and click the "Subscribe" button. ACLU Sues Catholic Hospital for Selectively Choosing Which Women Can Have Tubal Ligations. Thank you for your interest in Patheos newsletters! 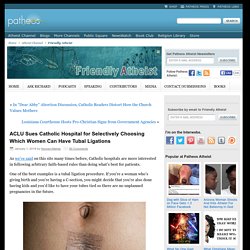 Please enter your email address below and click the "Subscribe" button. Thank you for your subscription. You can visit your Preference Center to complete your profile and see what else we have to offer. We apologize, we were unable to complete your subscription at this time, please try again later. If this error persists please contact us at communications@patheos.com. The Hideous Crimes of the Popes. Catholic dogmas are killing people in Africa. Religions are bundles of ideas and superstitions. 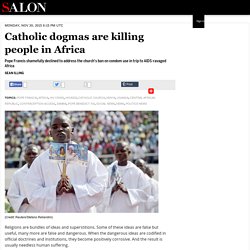 Some of these ideas are false but useful, many more are false and dangerous. When the dangerous ideas are codified in official doctrines and institutions, they become positively corrosive. And the result is usually needless human suffering. Perhaps the most glaring example of this can be seen today in Central Africa, where the Catholic Church continues to preach the sinfulness of condom use.

Hundreds of boys were abused at a Minnesota Catholic school. Catholic priest Finian McDonald, above, is one of five priests at a Minnesota school who were exposed as this week as predatory child abusers. 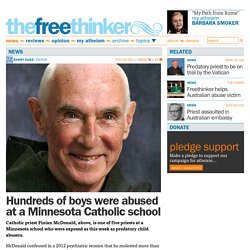 McDonald confessed in a 2012 psychiatric session that he molested more than 200 boys, 18 of whom were children under his care in the dormitories of St John’s Preparatory School, a private boys’ school run by the monks in Collegeville. Her admitted that he drank heavily and freely preyed on students during his years as a dormitory prefect. Pope Francis Joins The War On Christmas Calling The Celebration "A Charade" To anyone even remotely familiar with the Christian bible it has always been a mystery why Christians make such a fuss over, or even consider celebrating, Christmas when it is nowhere to found in their holy bible because its origins are Pagan. 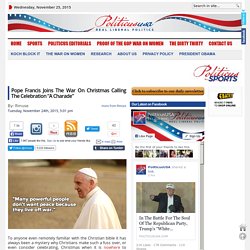 It is, however, not so much a mystery why conservative Christians and Republicans make a federal case over an alleged “war on Christmas” because the U.S. Constitution prohibits the government establishing religion and ramming it down the populations’ throat; something social conservatives claim is their religious right. In fact, ever since the shift to saying “Happy Holidays” instead of “Merry Christmas” to accommodate all faiths and not just Christianity, conservatives have made their ridiculous war on Christmas an annual cause célèbre.

Not because there is a war on Santa Claus or Jesus, but to incite anger and righteous religious rage towards anyone not in the religious right’s special club. Pope Francis said, Pope Francis declares War on Christmas: The holiday will be a “charade” this year. In a speech late last week, Pope Francis came as close to cancelling Christmas as a pope likely ever has, calling the holiday a “charade” when “the whole world is at war,” as he currently believes it to be. 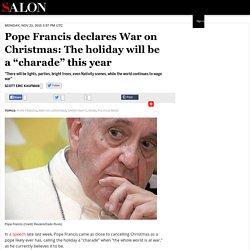 Priest Says He Can ‘Understand’ Pedophilia – But Says Homosexuality Is Sick. Don Gino Flaim, 75, of the diocese of Trento in Northern Italy, has been removed from his position and banned from preaching since his comments were aired on Italian television on Tuesday.

Not only did he say he could understand how a Catholic priest could be a pedophile, he actually blamed the children – the victims. New Reports Show The Cost Of Abuse At The Hands Of Catholic Priests. It’s no secret that the Catholic church has had its share of abuse scandals. 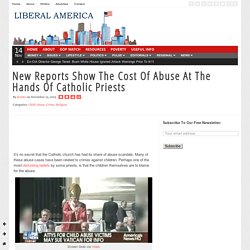 Many of these abuse cases have been related to crimes against children. Supreme Court to Hear Challenge to Obamacare For the Fourth Damn Time. The Catholic Church Has Paid Out $3,994,797,060.10 as a Result of the Sex Abuse Scandals. Thank you for your interest in Patheos newsletters! 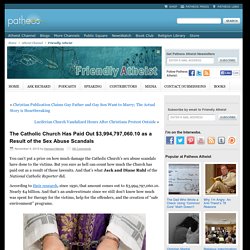 Please enter your email address below and click the "Subscribe" button. Thank you for your subscription. You can visit your Preference Center to complete your profile and see what else we have to offer. We apologize, we were unable to complete your subscription at this time, please try again later. If this error persists please contact us at communications@patheos.com. The Hideous Crimes of the Popes. Archbishop Sets Restrictions for When Priests Should Deny Communion to Catholics. Michigan Catholic hospital refused to help woman with brain tumor because of religious beliefs: ACLU. The American Civil Liberties Union on Wednesday accused a Catholic hospital in Michigan of failing to provide appropriate care by refusing on religious grounds to allow a pregnant woman with a brain tumor to be sterilized. 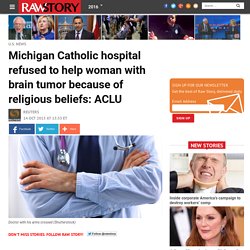 The ACLU of Michigan filed a complaint with the state department that handles health regulations against Genesys Regional Medical Center in the Detroit suburb of Grand Blanc, which is part of Ascension Health, the country’s largest Catholic health organization. The Hypocrisy of “Progressive” Catholics. Mother Teresa’s Charity Ends Adoptions in India So Kids Won’t Have Divorced or Gay Parents.

Catholic Priest in Hot Water After Lying About Hidden Camera in Church Bathroom. Pope's Speech Should Remind Americans That Conservatives Don't Own Christianity. Pope Francis Clashes With Conservative Catholics: The Irony Of Orthodoxy. Since we developed the ability to talk thousands of years ago, few have had the audience the Pope enjoys. With the Pope’s visit to the United States, his omnipresent voice on social justice, climate change and his recent admonitions to Catholics concerning the refugees streaming from Syria, the Pope continues to make headlines.

Vatican slams gay Polish priest over ‘irresponsible’ coming out. Pope Francis speaks during the annual Christmas mass at the Vatican on Dec. 24, 2014 [AFP] Vatican Fires Priest After He Comes Out As Gay Ahead Of Bishops' Meeting. Monsignor Krzysztof Charamsa, left, and his partner Eduard, surname not given, leave a restaurant after a news conference in downtown Rome, on Saturday. The Vatican on Saturday fired Charamsa who came out as gay on the eve of a big meeting of the world's bishops to discuss church outreach to gays, divorcees and more traditional Catholic families. Alessandra Tarantino/AP hide caption itoggle caption Alessandra Tarantino/AP. A Brief Introduction To Christianity In America. This is an excerpt from David G. McAfee’s first book, Disproving Christianity and other Secular Writings, available in paperback, e-book, and audiobook here. In the United States of America, the Christian tradition is so overwhelmingly prevalent that it has influenced our nation’s formation, our laws, political appointments, and many other aspects of daily life.

The United States of America is the land of freedom; our federal Constitution even guarantees the citizens of this nation the freedom of religion, speech, the press, and individual opportunity to pursue happiness. The Constitution also guarantees the freedom to be governed by a secular political system, commonly known as the separation of church and state, which simply means that our government should be free of religious influences in order to avoid a nation oppressed by a religious majority much like the one that our Constitution’s framers had escaped. The Principle America was built upon American Money. On Popes, Swearing In On Bibles And Religion In Public Life : It's All Politics. Catholic clergy sit among members of Congress as Pope Francis addressed a joint meeting of Congress Thursday. Human Rights Campaign. This Catholic anti-abortion organization wants you to suffer — and actually says so!

Catholic School Fires Gay Teacher, Then Offers Her a Year’s Salary if She Doesn’t Tell Anyone About It. Springfield (IL) Catholic School Policy Targets Parents Who Don’t Strictly Follow Church Teachings. Vatican Christmas Shocker! Pope says child rape isn't that bad, was normal back in his day. © UnknownIs the game up for the Catholic Church? Sadly not, as many of its brainwashed members will continue to support it in spite of its now overt symptoms of psychopathology.