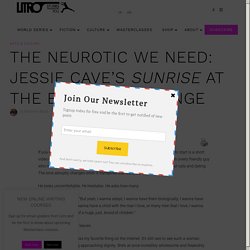 In the sketch, Norwegian comic Daniel Simonsen plays an overly friendly guy who meets Cave in a waiting room and starts making awkward small talk about cats and dating. The tone abruptly changes when it transpires that Cave wants kids. He looks uncomfortable. He hesitates. He asks how many. Urban Myths: Hendrix & Handel - Sky Arts Comedy. Watch the Football! - That Mitchell and Webb Look - BBC Two. When Your Therapist Is Even More Stressed Out Than You?! Galaxy Quest Official Trailer! Stella Street: Series 1, Ep1 - Who's Jimmy Hill. Peter Kay - John Smith Adverts. BBC News - The Coronavirus Newscast, The Electioncast Grand National. Meet the Richardsons on UKTV Play. The filming of the 'Hermits' sketch from 1973.

Doug Stanhope - Opinionated idiots (Charlie Brooker's Newswipe) 15 Times Karen Walker From "Will & Grace" Was Your Spirit Animal. Late for meeting. Chimp In Cocaine Study Starts Lying To Friends. ATLANTA—Concerned workers at the National Primate Research Center said Bobo, a 5-year-old chimpanzee participating in a 16-month cocaine study, was observed this week lying to the faces of friends, family, and staff. 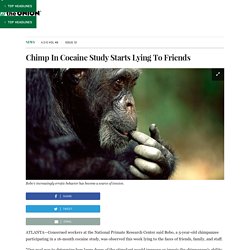 "Our goal was to determine how large doses of the stimulant would improve or impair the chimpanzee's ability to perform memory and language tasks," said primatologist Daniel Martin, the project's lead researcher. "What we found was that cocaine not only disrupted Bobo's concentration and recall, but it also caused him to lie, cheat, and emotionally manipulate those around him. " Simon Amstell: Carnage. Anomolus anonymouse. Jon Stewart Reads Trump's Next Batch Of Executive Orders. 8 Out Of 10 Cats Does Countdown S03E07 (18 July 2014) Your Name, Sir? - A Bit of Fry and Laurie - BBC. Big Train: The Office gone wrong! Jesus vs the Devil - Comedy Greats - BBC. The Parrot Sketch. Peter Cook & Dudley Moore - One Leg Too Few (1964) Spudgun job interview. The Office: Jim's Pranks, Season 1. 54 Hilarious Protest Signs We Can ALL Get Behind. Freedom of speech and political protest are some of the greatest traditions in the United States, but sometimes they can get a little serious. 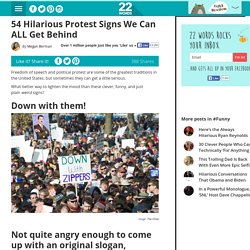 What better way to lighten the mood than these clever, funny, and just plain weird signs? Down with them! Let's make a dope deal original. In pictures: The 12 Labours of... Putin. In Greek mythology, Heracles, or Hercules, the son of Zeus, performed 12 labours: a dozen incredibly difficult and highly dangerous tasks. 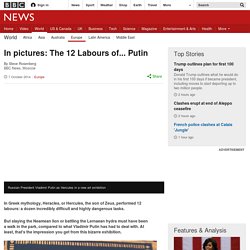 But slaying the Neamean lion or battling the Lernaean hydra must have been a walk in the park, compared to what Vladimir Putin has had to deal with. At least, that's the impression you get from this bizarre exhibition. DuctTapeGuys.com. BBC Three - Fleabag. Power Monkeys - On Demand - All 4. 7 Days in Hell: HBO's tennis mockumentary is a grand slam. What’s the name of the show? 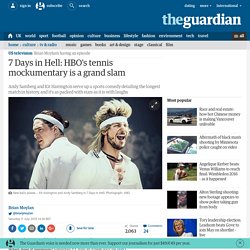 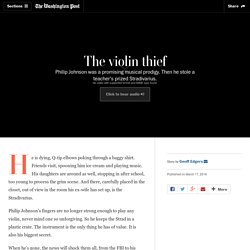 The Johnson family’s neighborhood, just a half-hour southwest of Philadelphia, is made up of the neat, modest brick houses that sprang up all across postwar America. It was not a happy home. Robert, his father, had studied to become an artist before giving it up to become a machinist. Marion, his mother, is paralyzed by anxiety and depression. By the time the children come along — Robert Jr., Carol and finally Philip — Marion won’t so much as leave the house for the supermarket. 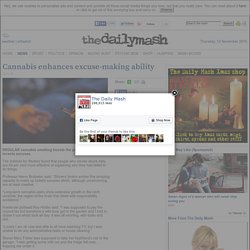 The Institute for Studies found that people who smoke skunk daily are 84 per cent more effective at explaining why they had failed to do things. Professor Henry Brubaker said: “Stoners’ brains evolve this amazing capacity to make up bullshit excuses which, although unconvincing, are at least creative. “Long-term cannabis users show extensive growth in the ninth ventricle, the region of the brain that deals with responsibility avoidance.”

Inveterate pothead Roy Hobbs said: “I was supposed to pay the council tax but somehow a wild boar got in the garden and I had to chase it out which took all day. It was all snorting, with tusks and shit. Spaceship Earth. Chindogu: The Refined Japanese Art Of Making Unuseless Inventions. Faceoff: The Best Start Pages for Your Browser. MODERN LIFE IS GOODISH S1E5 - Horsemeat 'Found Poem' Bicycle Repairman. Vimrod - Bard of Suburbia by Swerling & Lazar. YOU'RE ALL JUST JEALOUS OF MY JETPACK. Kevin Turvey - The Man Behind The Green Door. 47 Hilariously Underwhelming Local News Headlines. Jon Stewart 9 11. Would I Lie to You? (2007) s09e01 Episode Script. Jensen Interceptor (Series 17, Episode 5)

Noel Fielding & Richard Ayoade go on holiday: Gadget Man S02E04. Richard Ayoade & David Mitchell on Gaming: Gadget Man S03E06. Beyond the Fringe (Complete) He knows nothing of the crunch. Back to the Crunch. The Crunch. Modern Family iPhone Episode: "Connection Lost" and Storytelling. By the time you reach your sixth year of anything, you’ve got to find new ways to keep it interesting. 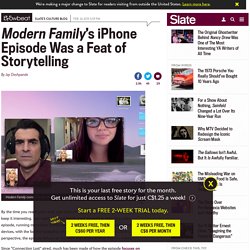 Last night’s Modern Family tried something new: The entire episode, running more than 21 minutes, was filmed on iPhones and other Apple devices, with the familiar backdrop of a computer desktop. Seen from Claire’s perspective, the episode follows all the main characters as they interact online. Since “Connection Lost” aired, much has been made of how the episode focuses on Apple products, or how the cast and crew pulled off filming it, or how it speaks to themes of communication within a family. Across the board, the attention is on the technology itself. But this episode felt uniquely modern for another reason: it used multitasking as a new way to tell a story. John Shuttleworth - 500 Bus Stops - Episode 1. Bonus bugle - The best/worst of FIFA by The Bugle.