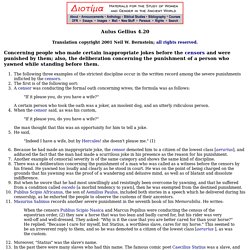 Bernstein; all rights reserved. Concerning people who made certain inappropriate jokes before the censors and were punished by them; also, the deliberation concerning the punishment of a person who yawned while standing before them. The following three examples of the strictest discipline occur in the written record among the severe punishments inflicted by the censors. Let's see how educated the fans here are. No liking/sharing unless you get the reference... So this is where all the cat fuss started! Sisyphus' accursed family. Stephenjenkin: Sisyphus' Facebook page. ... Atlas also has the weight under his shoulders. Après le point coiffure passons à la lessive mytho! @a4organizeur @ArreteTonChar1 @soliloquor.

Joke. Eight great Roman jokes: TV historian Mary Beard brings 2,000-year-old humour to Cheltenham Literature Festival. Comments (0) There would have been some pretty old jokes wheeled out at Cheltenham Town Hall in the past. 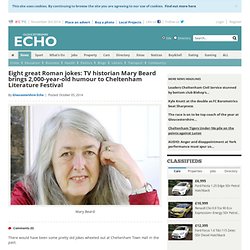 But even the most groan-inducing stand-up comedian would be hard pressed to come out with jokes older than historian Mary Beard delivered on Sunday as part of the Cheltenham Literature Festival. Not that she was trying to get a packed audience rolling in the aisles, as she was revealing Roman humour in a bid to gain an insight into the ordinary men and woman who lived 2,000 years ago.

Mary said that if you look at what they laugh at, you get a deeper, richer view of the Romans. She explained how The Ancient Roman Joke Book, written in Greek, is believed to have been compiled in the 5th century AD Starring in the 260 jokes, are grumpy old men, over-sexed women, simpletons, the egghead (scholasticos) and ethnic stereotypes - mainly people from Abdera. Here are a selection of the jokes. Rire, ou ne pas rire, telle était la question. Medusa. 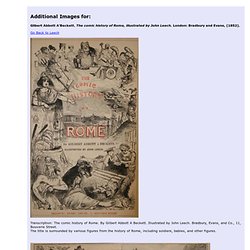 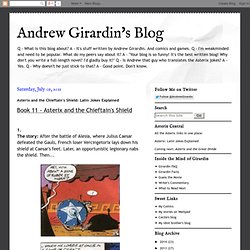 Later, an opportunistic legionary nabs the shield. Then... Professor Ibrox explains: "Whoo, tons of stuff here! Ruber et niger means 'red and black.' 17 Things Latin Nerds Know To Be True. Roman Jokers by Gregory Hays. Laughter in Ancient Rome: On Joking, Tickling, and Cracking Up by Mary Beard University of California Press, 319 pp., $29.95 In 1984 the American satirist Veronica Geng was asked to introduce a reprint of Dwight Macdonald’s Parodies: An Anthology from Chaucer to Beerbohm—and After. 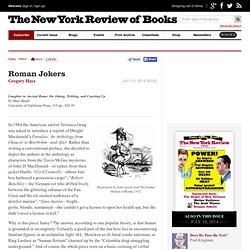 Rather than writing a conventional preface, she decided to depict the authors in the anthology as characters from the Travis McGee mysteries of John D. MacDonald—or rather, from their jacket blurbs: “Cyril Connolly—whose bait box harbored a poisonous cargo”; “Robert Benchley—the Vietnam vet who drifted freely between the glittering cabanas of the Fun Coast and the oil-stained walkways of a derelict marina”; “Jane Austen—bright, petite, blonde, suntanned—she couldn’t get a license to open her health spa, but she didn’t need a license to kill.” What made Romans LOL? A review of Laughter in Ancient Rome, by Mary Beard. 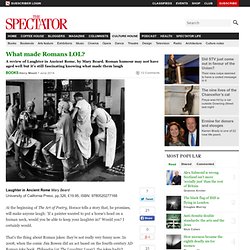 Roman humour may not have aged well but it’s still fascinating knowing what made them laugh At the beginning of The Art of Poetry, Horace tells a story that, he promises, will make anyone laugh: ‘If a painter wanted to put a horse’s head on a human neck, would you be able to keep your laughter in?’ Would you? I certainly would. That’s the thing about Roman jokes: they’re not really very funny now. So, if you’re expecting to laugh at the things that made Romans laugh, prepared to be disappointed by Mary Beard’s latest book. Greek Myth Comix. Life of Brian - ROMANES EUNT DOMUS. The Monty Python Philosophy Football Match: The Greeks v. the Germans. "He has a wife you know" (Search results for: cartoonshumour)