A million bottles a minute: world's plastic binge 'as dangerous as climate change' 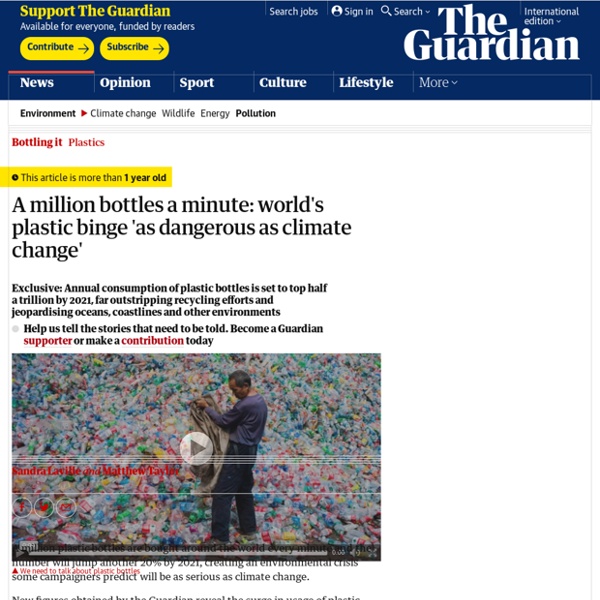 A million plastic bottles are bought around the world every minute and the number will jump another 20% by 2021, creating an environmental crisis some campaigners predict will be as serious as climate change. New figures obtained by the Guardian reveal the surge in usage of plastic bottles, more than half a trillion of which will be sold annually by the end of the decade. The demand, equivalent to about 20,000 bottles being bought every second, is driven by an apparently insatiable desire for bottled water and the spread of a western, urbanised “on the go” culture to China and the Asia Pacific region. More than 480bn plastic drinking bottles were sold in 2016 across the world, up from about 300bn a decade ago. If placed end to end, they would extend more than halfway to the sun. By 2021 this will increase to 583.3bn, according to the most up-to-date estimates from Euromonitor International’s global packaging trends report. China is responsible for most of the increase in demand.

Plus Plastic - Multimedia Bottled water manufacturers emphasized their products met all government requirements. Gerolsteiner, a German bottler, said its tests "have come up with a significantly lower quantity of microparticles per liter," than found in Orb's study. Nestle tested six bottles from three locations after an inquiry from Orb Media. Recycle ▶ The Facts: Plastic One ton of recycled plastic saves: 5,774 kWh of elecetricity. 685 gallons of oil. 98 million Btu’s of energy. 30 cubic yards of landfill space. Plastic takes up to 1,000 years to degrade in a landfill. Recycling plastic takes 88% less energy than making plastic from raw materials. A Look at Vietnam’s Plastic Craft Villages Each year millions and millions of tonnes of plastic are produced. Estimates of worldwide annual production vary, but quantities of well over a 300 million tonnes are likely. Plastic is a ubiquitous material used to make an enormous number and range of goods. In many cases these products are only used once — such as the 500 billion to one trillion plastic bags churned out worldwide every year. Much of the world’s plastic ends up as pollution in the land and the sea, to say nothing of the greenhouse gases emitted by its production and disposal.

Danger zones: mapping Europe’s earthquakes A deeper understanding and better communication of earthquake risk has been a major challenge in geosciences for a long time. The Global Earthquake Model initiative aims to become the world’s most complete source of earthquake risk resources and works towards a globally accepted standard for risk assessment. As part of this collaborative initiative, the EU-funded SHARE (‘Seismic Hazard Harmonization in Europe’) project helped in generating the first consistent regional seismic hazard model for Europe (including Turkey). Coral reefs are in crisis – but scientists are finding effective ways to restore them These are bleak times for coral reefs. Warming ocean waters, disease outbreaks, pollution, sedimentation, careless scuba divers, destructive fishing practices, and a host of other global and local stressors are decimating coral populations at unprecedented rates. If there is any silver lining to these events, it may be that many of the disturbances killing corals are acute: They occur just for a short period of time and then disappear, potentially allowing corals to recover before the next disturbance. But as stressors become more and more frequent, humans may have to help foster corals’ recovery. Many organizations are working to combat coral loss by restoring corals to damaged reefs. But some approaches are more likely to be successful in restoring coral populations than others.

In Our Opinion: Why deposits make sense for retailers - Resource Recycling News There’s no denying it; the world is experiencing a plastic waste crisis and it’s growing – but so is public awareness and action. Clarissa Morawski In June 2018, as part of its “Planet or Plastic?” initiative, National Geographic magazine devoted a special cover to plastic pollution, and since then, the issue of plastic discards has received more attention from the media, public and politicians than ever before. As plastic grabs more focus on the international agenda, the momentum behind deposit return systems for beverage containers continues to grow. In July, the Scottish Government launched a public consultation on deposits to gather stakeholder opinions on how such a scheme for Scotland should work.

Plastic pollution: Images of a global problem In its June issue, National Geographic magazine has published a selection of startling photos highlighting the vast amounts of discarded plastic choking the world's oceans, shorelines and rivers. Wildlife, particularly marine animals, are at risk when they become entangled in plastic waste, or ingest it. Image copyright NAtional Geographic Trapped in a plastic bag at a landfill in Spain, this stork has a lucky escape - the photographer later freed it. One bag can kill more than once: carcasses decay, but the plastic lasts.

economist ON MARCH 22nd, exactly one year after a series of suicide bombings killed 32 civilians in Brussels, a terrorist attacked central London. The British-born man drove a car along the pavement across Westminster Bridge, killing at least two people and leaving around 40 injured. He then entered the grounds of Parliament, the heart of Britain’s democracy, and fatally stabbed an unarmed policeman before being shot dead. This “marauding” method of terror attack—using a vehicle to mow people down in a crowded area—was similar to atrocities carried out by Islamists last year in France and Germany. It was the deadliest terrorist attack London has suffered since the Tube and bus bombings of 2005. Many other western European countries have suffered similar jihadist attacks in the past 16 years.

We calculated how much money trees save for your city Megacities are on the rise. There are currently 47 such areas around the globe, each housing more than 10 million residents. More than half the global population now lives in urban areas, comprising about 3 percent of the Earth. The ecological footprint of this growth is vast and there’s far more that can be done to improve life for urban residents around the world. When it comes to natural spaces, trees are keystone species in the urban ecosystem, providing a number of services that benefit people. Bottled Water and Energy Fact Sheet Published: February 2007 Bottled Water and Energy Fact Sheet The growing consumption of bottled water raises questions about the product’s economic and environmental costs. Among the most significant concerns are the resources required to produce the plastic bottles and to deliver filled bottles to consumers, including both energy and water.

Interactive Map: Arms Trade and Refugees Interactive map « European weapons and refugees » The purpose of this interactive map is to highlight the link between European arms export and flows of refugees and internally displaced persons, in order to determine whether there is any direct or indirect responsibility of EU Member States for situations of insecurity and violence that drive millions of people to flee their homes every year. A second objective of this tool is to stress their (ir)responsibility in European arms export authorization or realization as well as their inadequate compliance of the existing legislation, established by the Common Position 2008/944/CFSP of December 8, 2008, which sets up 22 weapons categories including ammunition, light weapons, aircraft and warships, military transport vehicles and all types of military technology for military purposes. Data can be displayed as table, graphic and map, and be downloaded in different formats. Steps to follow for a correct visualization:

National Geographic Is Ditching Their Plastic Wrapper and Launching a Campaign to Combat Waste! - One Green Planet National Geographic has announced they will be joining in to help save the planet, whose beauty they have captured for decades, by taking action against plastic pollution. The magazine will no longer come in a plastic wrapper, and the organization is launching a multiyear campaign called “Planet or Plastic?” meant to encourage people to reduce their use of plastic disposables. “Can it really be true that half the plastic ever made was produced in the past 15 years?”

coca-cola-pepsi-nestle-plastic-pollution-leaked-letter-water-down-laws-a8590916 Some of the world’s biggest plastic polluters have lobbied EU member states in an attempt to water down legislation aimed at tackling the global plastics crisis. A leaked letter signed by Coca-Cola, Nestlé, PepsiCo and Danone urges member states of the Council of the EU to scrap a proposal to force companies to make sure plastic bottle caps are not detachable. Currently, bottle caps are among the most pernicious of plastic waste and are some the most commonly found items in beach cleanups around the world.