How the oceans can clean themselves: Boyan Slat at TEDxDelft 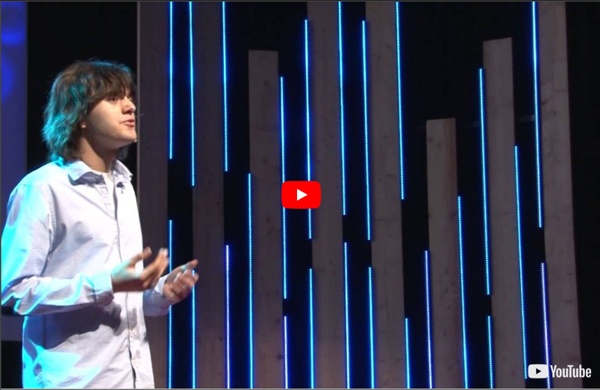 Boyan Slat “Human history is basically a list of things that couldn't be done, and then were done.” Boyan Slat (Delft, 1994) combines environmentalism, creativity and technology to tackle global issues of sustainability. Currently working on oceanic plastic pollution, he believes current prevention measures will have to be supplemented by active removal of plastics in order to succeed. “It will be very hard to convince everyone in the world to handle their plastics responsibly, but what we humans are very good in, is inventing technical solutions to our problems. Besides leading The Ocean Cleanup, Boyan is an Aerospace Engineering student at the Delft University of Technology, and is an avid photographer and diver. At age 14, he was awarded the Best Idea of South-Holland award, and a Guinness World Record.

More Americans Work in Solar Power Than for Apple, Facebook, and Google Combined In Brief Following an amazing 30-fold increase in PV sales over the past nine years, the solar industry in the U.S. now employs more than 260,000 workers nationwide. That’s more workers than Apple, Facebook, and Google combined. Numbers Don’t Lie Anyone watching the solar market has seen an amazing increase in solar photovoltaics (PV) sales over the past nine years, and GTM Research reports that the industry is still growing during the first quarter of 2017. In just under a decade, the solar market has experienced a 30-fold increase, and 2016 alone saw a notable surge in annual global PV demand in excess of 50 percent over the previous year. At one point in March, the share of California’s power demand going to solar actually topped 50 percent for the first time. Solar Power Delivers Jobs As of 2016, California had just over 100,000 solar jobs — a one-third increase over 2015’s figures. Climate change predictions are absolutely grounded in scientific data and process.

Popcorning My Way Through: Dey Dos at TEDxUniTn Hollanddoc We dump 8 million tons of plastic into the ocean each year. Where does it all go? What happens to all our plastic bottles and lids and containers after we toss them out? Every single ocean now has a massive swirling plastic garbage patch The vast majority of plastic trash ends up in landfills, just sitting there and taking thousands of years to degrade. A smaller fraction gets recycled (about 9 percent in the United States). But there's another big chunk that finds its way into the oceans, either from people chucking litter into waterways or from storm-water runoff carrying plastic debris to the coasts. Now we can finally quantify this problem: A new study in Science calculates that between 5 and 13 million metric tons of plastic waste made it into the ocean in 2010 alone. Plastic debris in the Mediterranean Sea. And here's another surprise twist: We still don't know where most of that ocean plastic actually ends up. Yet those patches accounted for less than 1 percent of the plastic thought to be in the oceans — and no one quite knows where the other 99 percent went.

The Ocean Cleanup WOW! This Woman Walked the Equivalent of Half of Earth's Circumference to Raise Awareness About Water Pollution - One Green Planet When Josephine Mandamin, an elder of the Anishinaabe Indian tribe, decided to take a walk around Lake Superior in 2003, it was much more than just your average stroll: Mandamin set out to journey around the lake with the goal of spreading awareness about how human actions are polluting our water, thus making it and, in turn, ourselves sick. Since then, the amazing Mandamin has walked an estimated 25,000 kilometers — the equivalent of half of Earth’s circumference — to promote the importance of saving our water. In recent years, her unending devotion to educating people on how fracking, pollution, and other human activities are jeopardizing one of our most precious resources has inspired many others to walk along with her. Following in her footsteps, Mandamin’s niece, Elizabeth Osawamick, and another First Nations elder named Shirley Williams now organize annual Nibi (Water) Walks designed to raise awareness about the urgent need to restore the health of our water. Related

TEDxSanJoseCA - Adam Gazzaley, MD, PhD - Brain: Memory and Multitasking political documentaries Photosynthesis Fuel Company Gets a Large Investment Green tea: Joule Energy’s SolarConverter turns carbon dioxide and sunlight into ethanol fuel at a pilot plant in Leander, Texas. Joule Unlimited, a startup based in Bedford, Massachusetts, has received $70 million to commercialize technology that uses microörganisms to turn sunlight and carbon dioxide into liquid fuel. The company claims that its genetically engineered bacteria will eventually be able to produce ethanol for as little as $1.23 a gallon or diesel fuel for $1.19 a gallon, less than half the current cost of both fossil fuels and existing biofuels. The new funding comes from undisclosed investors and will allow the company to expand from an existing pilot plant to its first small-scale production facility, in Hobbs, New Mexico. Joule Unlimited has designed a device it calls the SolarConverter, in which thin, clear panels circulate brackish water and a nitrogen-based growth medium bubbling with carbon dioxide.

19-Year-Old Student Develops Ocean Cleanup Array That Could Remove 7,250,000 Tons Of Plastic From the World's Oceans 19-year-old Boyan Slat has unveiled plans to create an Ocean Cleanup Array that could remove 7,250,000 tons of plastic waste from the world’s oceans. The device consists of an anchored network of floating booms and processing platforms that could be dispatched to garbage patches around the world. Instead of moving through the ocean, the array would span the radius of a garbage patch, acting as a giant funnel. At school, Boyan Slat launched a project that analyzed the size and amount of plastic particles in the ocean’s garbage patches. Slat went on to found The Ocean Cleanup Foundation, a non-profit organization which is responsible for the development of his proposed technologies. It is estimated that the clean-up process would take about five years, and it could greatly increase awareness about the world’s plastic garbage patches. + Boyan Slat

Genius 6th grader invents device that hunts for ocean microplastics As one of 10 finalists of the 3M Young Scientist Challenge, 12-year-old Anna Du will now get the chance to bring her invention to the seas. One day while visiting Boston Harbor, young Anna Du noticed bits of plastic in the sand. She tried picking them up, but there was so much, she tells Boston25 News, that "it just seemed impossible to clean it all up." What's a 12-year-old animal lover concerned about the impact of ocean plastic to do? Which is exactly what Anna has set out to do. © Anna Du (used with permission) Her creation is an underwater device that uses light to detect harmful pollution in the ocean – or, a "Smart Infrared Based ROV to Identify and Remove Microplastics from Marine Environments" – and it does so without harming living organisms. Anna chose to use infrared in her ROV device because it can help scientists distinguish microplastics from other, nonhazardous materials underwater without having to send samples to a lab. Right on, sister!

Graduation…now what? | Playlist | TED.com Now playing Clinical psychologist Meg Jay has a bold message for twentysomethings: Contrary to popular belief, your 20s are not a throwaway decade. In this provocative talk, Jay says that just because marriage, work and kids are happening later in life, doesn’t mean you can’t start planning now. She gives 3 pieces of advice for how twentysomethings can re-claim adulthood in the defining decade of their lives. “In your 20s, you may not get married or figure out exactly what career you want to pursue.