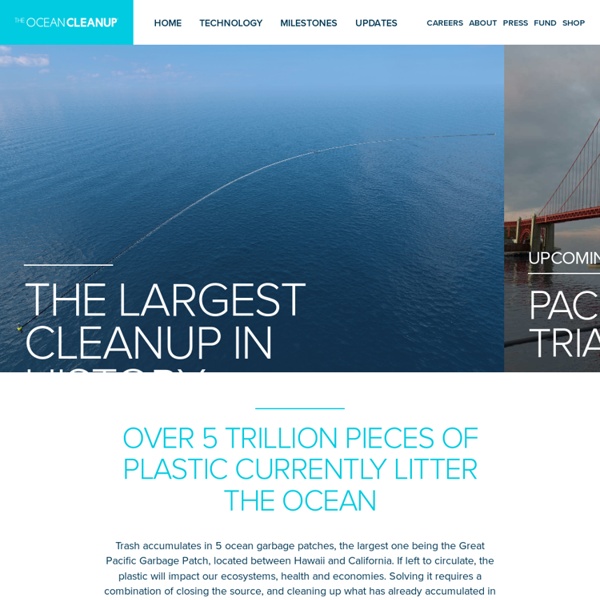 The Great Pacific Garbage Patch Resulting from several research missions, travelling across and above the GPGP, The Ocean Cleanup team compiled an unprecedented amount of data to better understand the plastic that persists in this region. Research Expeditions Scientists have been studying this area since the 1970's - usually by means of dragging a small sampling net through the debris. This method showed a bias towards smaller objects and did not provide much insight into the larger pieces, and, thus, the entire scope of the GPGP. Over the course of three years, researchers at The Ocean Cleanup went on several data collection missions.

WOW! This Woman Walked the Equivalent of Half of Earth's Circumference to Raise Awareness About Water Pollution - One Green Planet When Josephine Mandamin, an elder of the Anishinaabe Indian tribe, decided to take a walk around Lake Superior in 2003, it was much more than just your average stroll: Mandamin set out to journey around the lake with the goal of spreading awareness about how human actions are polluting our water, thus making it and, in turn, ourselves sick. Since then, the amazing Mandamin has walked an estimated 25,000 kilometers — the equivalent of half of Earth’s circumference — to promote the importance of saving our water. In recent years, her unending devotion to educating people on how fracking, pollution, and other human activities are jeopardizing one of our most precious resources has inspired many others to walk along with her. Following in her footsteps, Mandamin’s niece, Elizabeth Osawamick, and another First Nations elder named Shirley Williams now organize annual Nibi (Water) Walks designed to raise awareness about the urgent need to restore the health of our water. Related

Dolav Plastic Products - Waste Containers Detectable material boxes and Antimicrobial boxes Dolav innovation is proud to show two new solutions for the food industry Dolav Antimicrobial Box Pallets Protects against contamination from microbes at any stage of the supply chain. Genius 6th grader invents device that hunts for ocean microplastics As one of 10 finalists of the 3M Young Scientist Challenge, 12-year-old Anna Du will now get the chance to bring her invention to the seas. One day while visiting Boston Harbor, young Anna Du noticed bits of plastic in the sand. She tried picking them up, but there was so much, she tells Boston25 News, that "it just seemed impossible to clean it all up." What's a 12-year-old animal lover concerned about the impact of ocean plastic to do? Get to work on an invention to fix it, naturally. Which is exactly what Anna has set out to do.

The Power of Rubbish: Making Money from Waste Recently, some crazy scientists in Bristol, UK have discovered how to charge their smartphones with their own pee. By using micro-organisms which feed off their urine and generate electrons as a by-product, they have managed to produce enough electricity to charge a phone or power some lights. Although we can question the utility of this technology, considering the very small amount of energy produced, there may still be method to these scientists’ “madness”. People generate millions of tons of waste every day, and with rapid urbanization and population growth, this will only increase.

Groundbreaking 'spinning' wind turbine wins UK Dyson award A ‘spinning’ turbine which can capture wind travelling in any direction and could transform how consumers generate electricity has won its two student designers a prestigious James Dyson award. Nicolas Orellana, 36, and Yaseen Noorani, 24, both MSc students at Lancaster University, have created the O-Wind Turbine which – in a technological first – takes advantage of both horizontal and vertical winds without requiring steering. Conventional wind turbines only capture wind travelling in one direction, and are notoriously inefficient in cities where wind trapped between buildings becomes unpredictable, making the turbines unusable. In 2015 the controversial “Walkie Talkie” skyscraper on London’s Fenchurch Street was thought responsible for creating a wind tunnel which knocked down shop signs and even toppled pedestrians. Using a simple geometric shape, O-Wind Turbine is designed to make the most of multi-directional wind, generating energy even on the windiest of days.

Press Release: Is waste the next big business opportunity? Humans generate heaps of waste every day. Waste rich in energy, nutrients, or water. Most of it gets flushed down the drain, dumped in landfill sites, burned or even abandoned in public spaces or nature. Human Poop-Powered Bus Hits UK Roads You wouldn’t think that human poop has many uses, but it turns out that the UK is using brown to go green. As of today, Britain’s first “poo bus” will be shuttling passengers between the city of Bath and Bristol Airport. And yes, you guessed it: it’s powered by human waste, alongside food waste. This “Bio-bus” runs on biomethane gas, which is produced from the treatment of human sewage and food that is unsuitable for human consumption. It has a combustion engine that is similar to diesel engines in normal buses, but the gas is stored in dome-like tanks on the roof. The gas is generated using anaerobic (oxygen hating) bacteria, which break down the waste into methane-rich gas.

Mobile Recycler – Biocycler – Uses Living Organisms to Bind Construction Waste Into Bricks – Smart Cities Connect In the US, an excess of more than 500 million tons of demolition waste is shipped to landfills every year. In an attempt to solve this problem, Chris Maurer, Principal Architect with Cleveland-based redhouse studio, has partnered with NASA, MIT, and the University of Akron to create the Biocycler – a mobile recycler unit that can be brought to destination and recycle waste building materials on site. The Biocycler will use living organisms – referred to as cultured bio-binders – to bind construction waste into bricks that can be used to build new structures, making it eco-friendly. The researchers are experimenting with mycelium – the vegetative part of fungi – and calcite-producing microbes as building and binding materials in the process. “A symbiosis of the microbes and fungi can be made to feed each other and [they] are working towards using the microbes as bio-signals to tell us things about the structure and air-quality within it.