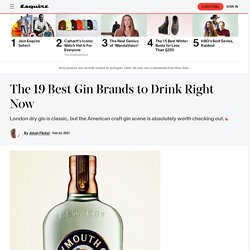 The former supplies the alcohol and maybe some flavor from the vermouth, a twist, or a few olives. A martini of this sort is more a vessel for intoxication than a true gustatory experience. Now consider the latter option. Gin is, by definition, full of flavor—juniper is the conductor leading a symphony of harmonious botanicals—so an ice cold, expertly proportioned gin martini can reach sublime heights. And this evocative cocktail changes character based on the gin you choose to showcase, which is why it’s so damn good. What Is Old Tom Gin. No, Old Tom doesn’t refer to anyone’s great uncle. 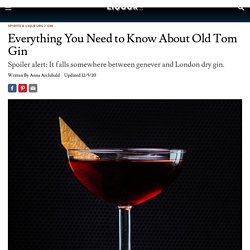 And it probably isn’t something your grandfather ever drank. This old-timey mother’s ruin, known for its sweet side, dates to the beginning of the 1800s, when gin drinking and making was rampant in England. 10 of the Best Bottom Shelf, Cheap Gins, Blind-Tasted and Ranked - Paste. This list is part of a Paste series of bottom shelf liquor and craft beer style tastings. 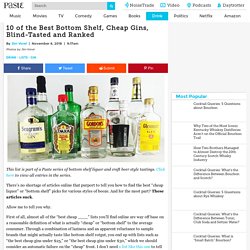 Click here to view all entries in the series. There’s no shortage of articles online that purport to tell you how to find the best “cheap liquor” or “bottom shelf” picks for various styles of booze. And for the most part? These articles suck. Allow me to tell you why. First of all, almost all of the “best cheap ____” lists you’ll find online are way off base on a reasonable definition of what is actually “cheap” or “bottom shelf” to the average consumer.

Secondly, most of these articles don’t even bother to make the claim that they rounded up all the liquors on the list for an actual, in-person tasting. Cocktail Queries: “London Dry” vs. Modern/“New Western” Gin - Paste. Cocktail Queries is a Paste series that examines and answers basic, common questions that drinkers may have about mixed drinks, cocktails and spirits. 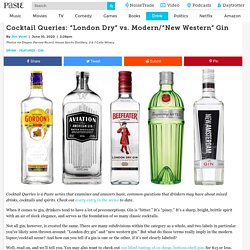 Check out every entry in the series to date. When it comes to gin, drinkers tend to have a lot of preconceptions. Irish Gin Is Having Its Botanical Moment. Gin is quintessentially British, but there’s a gin craze that has been taking over the Emerald Isle in the last few years. 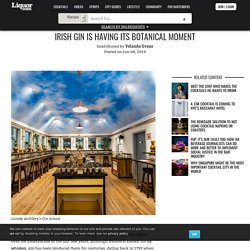 Although Ireland is known for its whiskey, gin has been produced there for centuries, dating back to 1793 when Cork dry gin was first launched. Yet many distilleries were only producing gin as a stopgap while they waited for their whiskey to mature. 15 Best Gin Brands 2019 - What Gin Bottles to Buy Right Now. The Best Ways to Use Navy Strength Gin, According to Bartenders and Distillers. The Best Gin at Any Price. 9 Things You Should Know About Aviation Gin. England has a strong claim to gin. 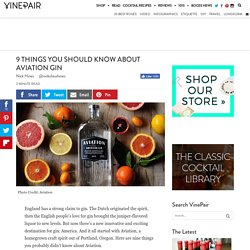 The Dutch originated the spirit, then the English people’s love for gin brought the juniper-flavored liquor to new levels. But now there’s a new innovative and exciting destination for gin: America. And it all started with Aviation, a homegrown craft spirit out of Portland, Oregon. Here are nine things you probably didn’t know about Aviation. Without Aviation, there would be no New Western Dry Gin. Ryan Magarian, one of the creators of Aviation, came up with the term “New Western Dry Gin” to describe what the distillery was doing: gins where the first taste was botanical, not juniper. Gin Tasting Chart - Gin & Tonic Recipe. 2016’s Best Gin. Login I forgot my password Don't Have an Account? 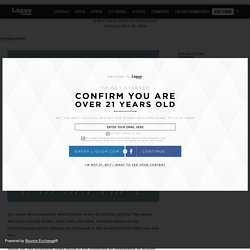 Signup Sent! Please check your email for a link to reset your password. Personalize your experience Date of Birth Thanks! Congratulations! 7 Great Bottles Of Gin Bursting With Botanicals. What qualifies gin as “gin”? 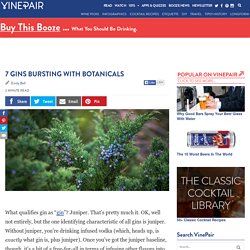 Juniper. That’s pretty much it. OK, well not entirely, but the one identifying characteristic of all gins is juniper. Without juniper, you’re drinking infused vodka (which, heads up, is exactly what gin is, plus juniper). Once you’ve got the juniper baseline, though, it’s a bit of a free-for-all in terms of infusing other flavors into your gin. Coolmaterial. The Gin and Tonic is one of the most classic cocktails ever invented. 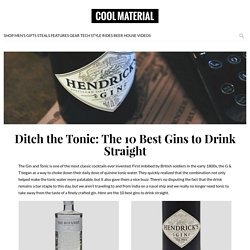 First imbibed by British soldiers in the early 1800s, the G & T began as a way to choke down their daily dose of quinine tonic water. They quickly realized that the combination not only helped make the tonic water more palatable, but it also gave them a nice buzz. There’s no disputing the fact that the drink remains a bar staple to this day, but we aren’t traveling to and from India on a naval ship and we really no longer need tonic to take away from the taste of a finely crafted gin.

Here are the 10 best gins to drink straight. Bruichladdich has been making Scotch since 1881. Does All London Dry Gin Come From London? At the start of “Gin and Juice,” arguably the most popular (and only) song we know on the topic of gin, Snoop Dogg (Lion? 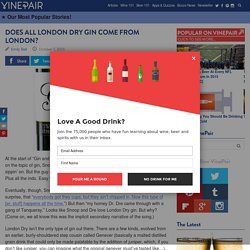 Dogg…) doesn’t clarify what kind of gin he’s sippin’ on. But the guy also had his mind on his money, and his money on his mind. Plus all the indo. Easy to get distracted. Eventually, though, Snoop does mention that he got some Seagram’s (and, no surprise, that “everybody got they cups, but they ain’t chipped in. The 9 Best Gins To Use In A Martini.

Contrary to what James Bond thinks, a true martini is made with gin. What separates gin from vodka is its characteristic botanicals. While 51% of these botanicals are comprised of juniper, the others are left up to the imagination of the distiller. Plymouth Gin Takes Chairman’s Trophy in Gin Category. The Story Of: Gin. Gin is a neutral grain spirit that is flavored with juniper berries and other botanicals. The word gin is an English shortening, derived from the word genever, which is Dutch for juniper. Arnold de Villanova developed the initial gin-like spirits in the 1200s, creating most specifically a medicinal formula for geneverbessenwater, which helped alleviate discomfort related to kidney ailments. In Holland in the 1580s, gin was consumed in copious amounts by British troops who were fighting the Spanish in the Dutch War of Independence.

What’s In With Gin. What’s In With Gin How well the gin category is doing depends on how you look at the numbers. Overall gin volume actually declined in 2011 by 1.7% (according to DISCUS) and the 2012 numbers are trending in the same direction. It would be easy to look at these numbers and write off gin as a struggling category with small annual gains or losses that never really goes anywhere. The Difference Between Tanqueray Gin and Tanqueray 10 Gin. Tanqueray London Dry Gin and Tanqueray 10 It’s been nearly 14 years since Tanqueray first launched Tanqueray No.

Ten Gin. In that time, Tanqueray Ten has become just as recognizable as Tanqueray’s London Dry Gin. Tanqueray Ten is considered by many to be an ideal martini gin, and it’s a frequent ingredient in many key gin cocktails at craft cocktail bars around the world. While there’s no need to change anything inside the bottle, Tanqueray has decided to update the Tanqueray Ten packaging, ditching the tall thin ridged bottle for a shorter, squatter bottle which is more in line with the classic Tanqueray shaker-style bottle.