Ye hae a G&T... Gin and tonic. In some countries, gin and tonic is marketed pre-mixed in single-serving cans.[4] In the United States, most bars will use tonic from a soda gun;[1] to get a real gin and tonic, mixologist Dale DeGroff recommends specifying bottled tonic.[1] Alternatively, one can add tonic syrup to soda water.[5] It is commonly referred to as a "G and T" in the UK, USA, Canada and Ireland.[6] Some brands will replace the word "gin" with their own brand or initial in recipes. 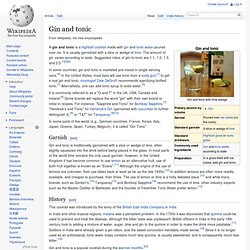 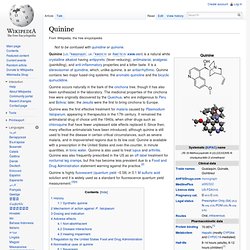 It is a stereoisomer of quinidine, which, unlike quinine, is an antiarrhythmic. Quinine contains two major fused-ring systems: the aromatic quinoline and the bicyclic quinuclidine. Quinine occurs naturally in the bark of the cinchona tree, though it has also been synthesized in the laboratory. The medicinal properties of the cinchona tree were originally discovered by the Quechua, who are indigenous to Peru and Bolivia; later, the Jesuits were the first to bring cinchona to Europe. Quinine was the first effective treatment for malaria caused by Plasmodium falciparum, appearing in therapeutics in the 17th century. 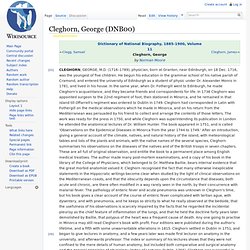 He begun his education in the grammar school of his native parish of Cramond, and entered the university of Edinburgh as a student of physic under Dr. Do You Know Where Your New Years Eve Cocktail Comes From? After a long workweek a business colleague and I decided to salve away our ills with a few cocktails. 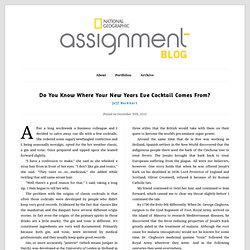 She ordered some sugary newfangled confection and I, being seasonally nostalgic, opted for the hot weather classic, a gin and tonic. Once prepared and sipped upon she leaned forward slightly. “I have a confession to make,” she said as she whisked a stray hair from in front of her eyes. “I don’t like gin and tonics,” she said. “They taste so…so…medicinal,” she added while twirling that self-same errant hair. “Well there’s a good reason for that,” I said, taking a long sip. The problem with the origins of classic cocktails is that often those cocktails were developed by people who didn’t keep very good records. Gin, or more accurately “jenever” (which means juniper in Dutch), was developed at the University of Leiden in Holland in 1650 by the physician Franciscus de la Boe (Dr. By 1736 the Brits felt differently.

My colleague looked at me quizzically. After which I had a few thoughts. Tonic water. Under ultraviolet light, the quinine in tonic water makes it fluorescent, even though it is present in a negligible concentration. 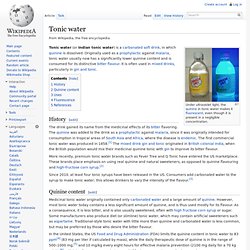 Tonic water (or Indian tonic water) is a carbonated soft drink, in which quinine is dissolved. Originally used as a prophylactic against malaria, tonic water usually now has a significantly lower quinine content and is consumed for its distinctive bitter flavour. It is often used in mixed drinks, particularly in gin and tonic. History[edit] More recently, premium tonic water brands such as Fever Tree and Q Tonic have entered the US marketplace. Since 2010, at least four tonic syrups have been released in the US. Quinine content[edit] Medicinal tonic water originally contained only carbonated water and a large amount of quinine.

Uses[edit] Fluorescence[edit] Tonic water will fluoresce under ultraviolet (UV) light, owing to the presence of quinine. Gin and Tonic recipe. Pour the gin and the tonic water into a highball glass almost filled with ice cubes. 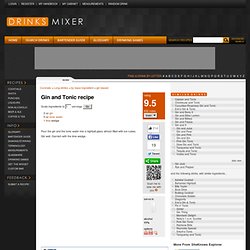 Stir well. Garnish with the lime wedge. More comments Gin and Tonic posted by Dana @ 05:12PM, 8/23/06 Daaamn what a good drink. Great Classic..... posted by Crx_adam @ 04:32AM, 8/25/06 Great simple drink, just avoid salty snacks with it. Gin and Tonics! Posted by Egan L @ 06:42PM, 10/12/06 Refreshing especially with a little extra lime and a bit of lemon too. Overview of George Cleghorn. George Cleghorn. "Why is this man celebrating someone whose name contains the letters Cleg? 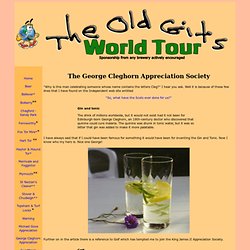 " I hear you ask. Well it is because of these few lines that I have found on the Independent web site entitled "So, what have the Scots ever done for us? " I have always said that if I could have been famous for something it would have been for inventing the Gin and Tonic. Now I know who my hero is. Further on in the article there is a reference to Golf which has tempted me to join the King James II Appreciation Society.