Steve Bannon and His Competent Lawyers Part Ways. It has been hard to understand Steve Bannon’s desperate efforts to sell a Hunter Biden conspiracy in recent weeks outside the context of a pardon audition. 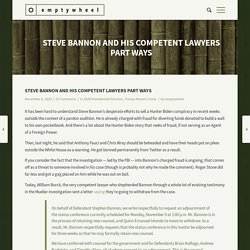 He is already charged with fraud for diverting funds donated to build a wall to his own pocketbook. And there’s a lot about the Hunter Biden story that reeks of fraud, if not serving as an Agent of a Foreign Power. Then, last night, he said that Anthony Fauci and Chris Wray should be beheaded and have their heads put on pikes outside the White House as a warning. He got banned permanently from Twitter as a result. The Downfall of Steve Bannon Looks Really Bad for Bill Barr and Donald Trump Jr. — from Alternet With the arrest of Steve Bannon — the president’s former campaign chair and White House strategist — and a group of his allies on Thursday, the world received confirmation of what many have long said about the conservative movement: The right-wing, ethnonationalist, populist rhetoric is often little more than a scam to win support from the massive to fund the desires of elites. 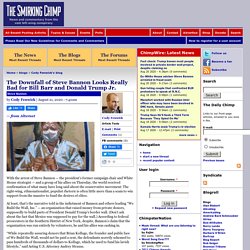 Politics.theonion. What Bannon Has Over the Trumps. It should be clear by now that the only real political talent possessed by Steve Bannon is his ability to take the usual political norms, shred them into slivers, and throw the whole mess up in front of an electric fan. 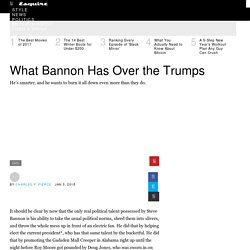 He did that by helping elect the current president*, who has that same talent by the bucketful. He did that by promoting the Gadsden Mall Creeper in Alabama right up until the night before Roy Moore got pounded by Doug Jones, who was sworn in on Wednesday as the Democratic junior senator from Alabama. And now, according to a new book by Michael Wolff, Bannon apparently has decided that it’s time to bring the temple down on his own head, just for laughs. From The Guardian: Advertisement - Continue Reading Below The meeting was revealed by the New York Times in July last year, prompting Trump Jr to say no consequential material was produced.

Getty. “I Have Power”: Is Steve Bannon Running for President? Around the time Donald Trump took off from the Philippines aboard Air Force One at the end of his 12-day Asia tour, Stephen K. 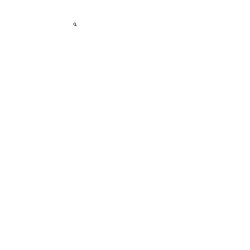 Bannon touched down at Tokyo International Airport. It was the evening of November 14, and the president’s former chief strategist flew to Japan to deliver a hard-edged anti-China speech at a conference for human-rights activists. “I’m not really a human-rights guy,” he told me as we boarded the plane in New York. “But this is a chance to talk to them about populism.” What Steve Bannon's 60 Minutes Interview Proved. There was gale-force bullshit coming from all points of the compass and nonsense was running at floodtide in the newspapers and on TV this past weekend, a sorry couple of days for elite political journalism. 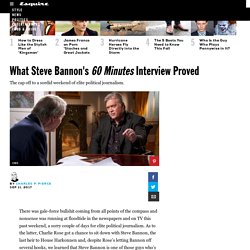 Advertisement - Continue Reading Below How in the world could Rose have this guy on and not even mention the Mercers, the wingnut billionaire power couple without whose bankroll Bannon would be just another Alex Jones hawking brain pills and chemtrail remover? Getty Please to be pulling the other leg, now. Paul D.

Why Steve Bannon Calls White Supremacists ‘Clowns’ and ‘Losers’ In Steve Bannon’s now-famous call to Robert Kuttner of The American Prospect the day before he was fired, Bannon described the white supremacists who had marched in Charlottesville as “losers” and “a collection of clowns.” 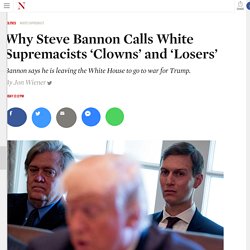 Of course, those are the same sorts of people Bannon mobilized to vote for Trump, the most loyal part of his base. I asked Joshua Green about that—he wrote the definitive book on Bannon, Devil’s Bargain. We spoke the evening before Bannon was fired as chief strategist at the Trump White House. “He said similar things to me,” Green said; “he called them ‘freaks’ and ‘goofballs.’” Bannon, he said, “views these kinds of alt-right Internet trolls as useful idiots whom he can manipulate to do his bidding. The big questions about Bannon, of course, are how Trump views him, and how he views Trump. Nervous Steve Bannon Binge-Eats Entire Class Of Interns Amid Calls For Removal. Why Conservatives Are Laughing at Steve Bannon. Steve Bannon Is Back in Trump’s Good Graces. On May 22, just as a strange photo of President Trump, Saudi king Salman, and Egyptian president Abdel Fattah el-Sisi touching a glowing orb reached the apex of its memehood, Steve Bannon, who was lurking somewhere beyond the orb’s glow, got on a plane in Riyadh and flew back to his book-stuffed apartment in a glass high-rise in Arlington, Virginia. 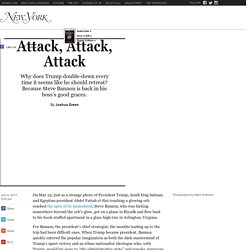 For Bannon, the president’s chief strategist, the months leading up to the trip had been difficult ones. When Trump became president, Bannon quickly entered the popular imagination as both the dark mastermind of Trump’s upset victory and an ethno-nationalist ideologue who, with Trump, would lay siege to “the administrative state” and remake American government in Trump’s image. Even as he was bottoming out, Bannon spied the next upturn. By May, Kushner’s situation had worsened considerably. After months of Trump fuming over the Russia probe, the president was considering firing FBI director James Comey, a move Kushner backed.

Report: Trump Not Briefed on Order That Gave Bannon NatSec Seat. President Donald Trump complained that he was not fully briefed before signing an executive order that gave chief political strategist Stephen Bannon a seat on the National Security Council, The New York Times reports. 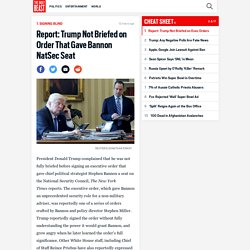 The executive order, which gave Bannon an unprecedented security role for a non-military adviser, was reportedly one of a series of orders crafted by Bannon and policy director Stephen Miller. ‘Sean got fatter’: Steve Bannon insults Spicer to explain why press secretary does briefings off camera. Office of Government Ethics nixes Steve Bannon's 'unsigned and undated' retroactive ethics waiver. The waiver is problematic because it is unsigned and undated, and it purports to have “retroactive” effect. 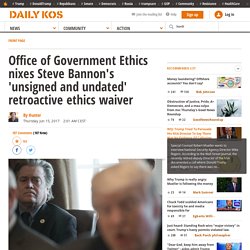 These deficiencies are inconsistent with the language of Executive Order 13770. As discussed earlier, the order expressly provides that a waiver is effective only after it has been signed: “A waiver shall take effect when the certification is signed by the President or his designee.” White House Staff Reminded To Place Lids Firmly On Trash Cans After Steve Bannon Gets Into Garbage Again. WASHINGTON—Following a series of incidents that left food and used paper products scattered throughout the West Wing, White House staff were reminded Friday to place lids firmly on all trash cans after President Trump’s senior advisor, Steve Bannon, got into the garbage again. 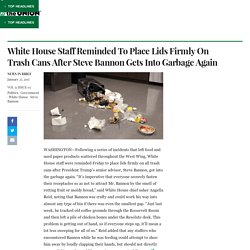 “It’s imperative that everyone securely fasten their receptacles so as not to attract Mr. Bannon by the smell of rotting fruit or moldy bread,” said White House chief usher Angella Reid, noting that Bannon was crafty and could work his way into almost any type of bin if there was even the smallest gap. “Just last week, he tracked old coffee grounds through the Roosevelt Room and then left a pile of chicken bones under the Resolute desk. This problem is getting out of hand, so if everyone steps up, it’ll mean a lot less sweeping for all of us.” Steve Bannon Marks Draft Of Executive Order He Likes With Noxious Pheromone Secretion.

Trump Spends 10 Minutes Mistakenly Addressing Steve Bannon’s Freshly Shed Exoskeleton. Steve Bannon Is Making Sure There’s No White House Paper Trail, Says Intel Source. If there was any question about who is largely in charge of national security behind the scenes at the White House, the answer is becoming increasingly clear: Steve Bannon, the former head of Breitbart News, a far-right media outlet, and now White House advisor. Even before he was given a formal seat on the National Security Council’s “principals committee” this weekend by President Donald Trump, Bannon was calling the shots and doing so with little to no input from the National Security Council staff, according to an intelligence official who asked not to be named out of fear of retribution. “He is running a cabal, almost like a shadow NSC,” the official said. He described a work environment where there is little appetite for dissenting opinions, shockingly no paper trail of what’s being discussed and agreed upon at meetings, and no guidance or encouragement so far from above about how the National Security Council staff should be organized.

“I was put on the N.S.C. with General Flynn to ensure that it was de-operationalized. General McMaster has returned the N.S.C. to its proper function.” OPEN Document Document: Stephen Bannon Is Removed From Top National Security Council Post Mr. It was one more drama in a White House consumed by palace intrigue, where officials jockey for the ear of the president, angle for authority and seek to place blame for political defeats. Mr. Analysis: Trump just made some very strange comments about Stephen K. Bannon. By Aaron Blake By Aaron Blake The Fix Analysis Analysis Interpretation of the news based on evidence, including data, as well as anticipating how events might unfold based on past events April 11 at 10:13 PM White House advisers Jared Kushner and Stephen K.

White House advisers Jared Kushner and Stephen K. The Wrath Of Steve? <a class="icopyright-article-tools-noscript" href=" target="_blank" title="Main menu of all reuse options"><img height="25" width="27" border="0" align="bottom" alt="[Reuse options]" src=" Click here for reuse options! </a> If Steve Bannon is fired, Politico's Ben Schreckinger believes that Donald Trump and his new best friends in the West Wing might rue the day: I asked friends and foes alike to imagine how, should Bannon get the boot, the pugnacious populist might exact his revenge.

Taken together, their suggestions amount to an epic, Kill Bill-style revenge saga that starts with Bannon leaking personal dirt on his enemies to the tabloids, using the megaphone of Breitbart News to exacerbate divisions inside the administration, and siccing an army of internet trolls on his adversaries to harass and defame them. I have my doubts about some of this. Stephen Bannon’s to-do list, annotated. By Philip Bump By Philip Bump Politics Analysis Analysis is interpretation of the news based on evidence, including data, as well as anticipating how events might unfold based on past events May 3 at 9:26 AM The Washington Post once referred to Rabbi Shmuly Boteach as “America’s most famous rabbi,” as you will learn once you arrive at Boteach’s Twitter page.

On Tuesday, Boteach — who bears a passing resemblance to a heavily-bearded Woody Harrelson — was at the White House for an Israel Independence Day celebration.