The Art of Thought: Graham Wallas on the Four Stages of Creativity, 1926 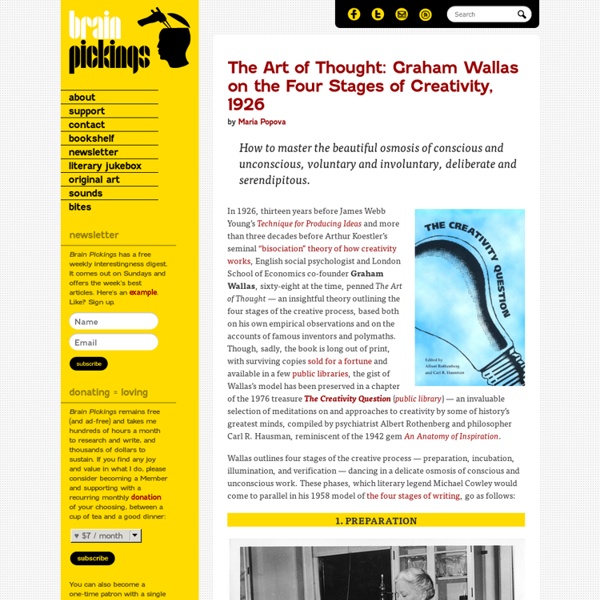 by Maria Popova How to master the beautiful osmosis of conscious and unconscious, voluntary and involuntary, deliberate and serendipitous. In 1926, thirteen years before James Webb Young’s Technique for Producing Ideas and more than three decades before Arthur Koestler’s seminal “bisociation” theory of how creativity works, English social psychologist and London School of Economics co-founder Graham Wallas, sixty-eight at the time, penned The Art of Thought — an insightful theory outlining the four stages of the creative process, based both on his own empirical observations and on the accounts of famous inventors and polymaths. Wallas outlines four stages of the creative process — preparation, incubation, illumination, and verification — dancing in a delicate osmosis of conscious and unconscious work. These phases, which literary legend Michael Cowley would come to parallel in his 1958 model of the four stages of writing, go as follows: T. Public domain images via Flickr Commons

Creative People Say No A Hungarian psychology professor once wrote to famous creators asking them to be interviewed for a book he was writing. One of the most interesting things about his project was how many people said “no.” Management writer Peter Drucker: “One of the secrets of productivity (in which I believe whereas I do not believe in creativity) is to have a VERY BIG waste paper basket to take care of ALL invitations such as yours — productivity in my experience consists of NOT doing anything that helps the work of other people but to spend all one’s time on the work the Good Lord has fitted one to do, and to do well.”

Milton Glaser on Art, Technology, and the Secret of Life by Maria Popova “You learn more and more that everything exists at once with its opposite, so the contradictions of life are never-ending and somehow the mediation between these opposites is the game of life.” Few things today are truly iconic, but the I♥NY logo is among them. Its beloved creator, the inimitable Milton Glaser — who also co-founded New York Magazine in 1968, and who is one of my most beloved creative and spiritual heroes — is an icon in his own right: often considered the greatest graphic designer alive, a remarkable educator who has shaped lives for more than half a century, a man of uncommon wisdom on art, integrity, and the kindness of the universe. In this beautiful and wide-ranging interview from The Good Life Project, Glaser offers an unprecedented tour of his magnificent mind and singular spirit. Transcribed highlights below.

10 Creative Visionaries Share Their Methods For Unlocking New Ideas Notions of creativity tend to fall into one of two camps: Either you're the wide-open brainstorm type, or you require pressure from deadlines, supply shortages, or other exterior factors to make your creativity tick. Jeni Britton Bauer—founder of the beloved Jeni's Splendid Ice Creams brand—operates by a process she calls "thinking inside the box." Variables like produce farmers' strawberry outputs and shipping logistics provide the framework within which she creates and delivers flavors like brown butter almond brittle from Ohio to the United Arab Emirates.

We need a creativity revolution: four ideas to stir it up. How do you transform a nation into the most creative place on earth? Or for that matter how do you transform a region, city or town? In short, how do you unlock a creativity revolution? As any reader of this blog site over the last week will have realised, the idea of unleashing creativity is becoming central to the RSA’s sense of its own mission, so this question is close to our heart right now.

Tim Burton's tribute to Christopher Lee After a lifetime as an imperious film and television star, Christopher Lee died at age 93 on June 7. Amid hundreds of screen roles, he appeared in five films for director Tim Burton, playing Willy Wonka’s dentist father in Charlie and the Chocolate Factory, an ancient mariner in Dark Shadows, the Jabberwocky in Alice in Wonderland, and an irate pastor in Corpse Bride. Here’s what the filmmaker told Entertainment Weekly about their time together. Related “What about Christopher Lee?” I suggested.

The mental benefits of fiction writing Every morning, after I’ve secured the intravenous drip from the coffee pot into my arm, I knock out a couple of hours of fiction writing. That’s not exactly surprising as I’m a science-fiction author so it would be surprising if I didn’t spend at least some of my time writing. For a while, I get to live in a world without ISIS and Justin Bieber and selfie-sticks, where the only rules are the ones I set. The 10 Stages of the Creative Process The Hunch Any project starts with a hunch, and you have to act on it. It’s a total risk because you’re just about to jump off a cliff, and you have to go for it if you believe in it. Talk About It Tell your family, tell your friends, tell your community … they’re the ones who are going to support you on this whole treacherous journey of the creative process, so involve them, engage them. The Sponge

India's biggest clean up effort. #ChennaiCostalCleanup #NoPlasticChallenge #SwatchBharat India’s largest socially-led cleaning initiative is happening in Chennai. The city is waging a war against plastic. Attention must be paid. Plastic is polluting our cities.