An Interactive Experience - World Population. Travel - One country’s endless war against water. My mom and I caught our first glimpses of the Netherlands while driving to Rotterdam from the airport. 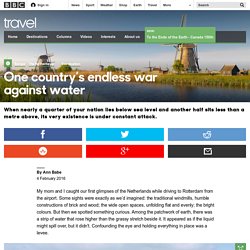 Some sights were exactly as we’d imagined: the traditional windmills, humble constructions of brick and wood; the wide open spaces, unfolding flat and evenly; the bright colours. But then we spotted something curious. Among the patchwork of earth, there was a strip of water that rose higher than the grassy stretch beside it. It appeared as if the liquid might spill over, but it didn't. Confounding the eye and holding everything in place was a levee. This was our introduction to the Netherlands’ relationship with water: a complicated balance of inviting it in and keeping it out. Len Verdel, a sailing enthusiast studying business administration, remembers what it was like to grow up below sea level. As climate change carries on and sea levels rise, the Netherlands’ future is uncertain. They say God created the world, but the Dutch created the Netherlands. StudentCom. Did results day not go as you had hoped? 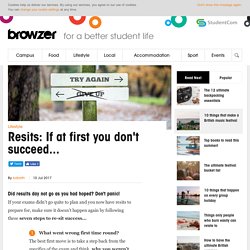 Don't panic! If your exams didn't go quite to plan and you now have resits to prepare for, make sure it doesn't happen again by following these seven steps to re-sit success... What went wrong first time round? The best first move is to take a step back from the specifics of the exam and think, why you weren’t successful first time round? Prince Harry: No royal wants to be king or queen. In an interview with Newsweek, Prince Harry said the monarchy was a "force for good" but suggested that he and his older brother Prince William are trying to overhaul its image. 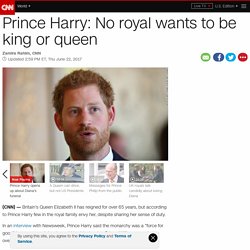 "We are involved in modernizing the British monarchy. We are not doing this for ourselves but for the greater good of the people" the prince said. "Is there any one of the royal family who wants to be king or queen? I don't think so, but we will carry out our duties at the right time. " Prince Harry also addressed his mother's death in the interview, something he's spoken about publicly in recent months. "My mother had just died, and I had to walk a long way behind her coffin, surrounded by thousands of people watching me while millions more did on television," he told Newsweek . "I don't think any child should be asked to do that, under any circumstances. In April, Prince Harry revealed that he sought counseling to deal with the grief of losing his mother, who died in a car crash in 1997.

The death of poetry. The consensus seems to be that poetry is dead. 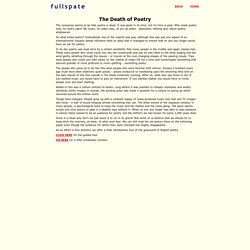 It was great in its time, but its time is past. Who reads poetry now, for God's sake? No music, no video clips, no pin-up poets - absolutely nothing sexy about poetry whatsoever. So what killed poetry? Undoubtedly one of the culprits was pop, although this was just one aspect of an entertainment industry whose influence went so deep that it managed to ensure that no one any longer would have an ear for poetry. In its day poetry was kept alive by a certain sensibility that many people in the middle and upper classes had. The people who grew up to be like this were people who were familiar with silence. Added to this was a culture centred on books. Things have changed. General Election 2017: How to vote. Image copyright Getty Images On 8 June, the UK will go the polls in the general election. 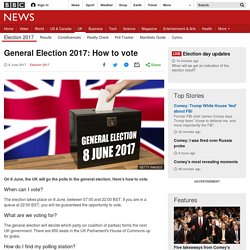 Here's how to vote. When can I vote? The election takes place on 8 June, between 07:00 and 22:00 BST. If you are in a queue at 22:00 BST, you will be guaranteed the opportunity to vote. What are we voting for? The general election will decide which party (or coalition of parties) forms the next UK government. How do I find my polling station? If you are on the electoral register, you should have received a polling card through the post which has your name, polling number and the address of your polling station printed on it. Polling stations are usually set up in public buildings such as schools, community centres and village halls near where you live.