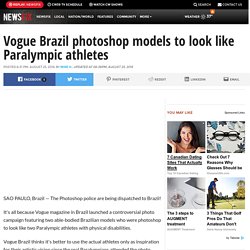 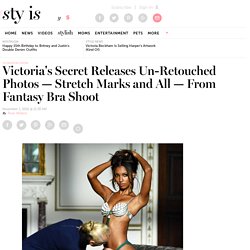 Ahead of its annual fashion show, Victoria's Secret released a series of images starring model Jasmine Tookes modeling the 2016 Fantasy Bra. But, while we were busy obsessing over the $3 million 450-carat bra, we didn't notice just how raw the photos actually were — until now. While the brand has been called out in the past for over-Photoshopping its models, these pics of Tookes, 25, snapped on October 8 in New Jersey, show off the Angel's natural beauty, including small stretch marks on her upper thighs. (That is a big deal for Victoria's Secret, but it really shouldn't be since we all have 'em!) The photoshopped knees of Gigi Hadid, Kendall Jenner on W magazine cover could be intentional. 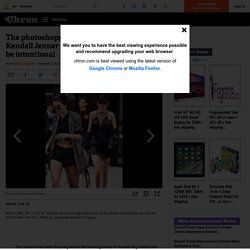 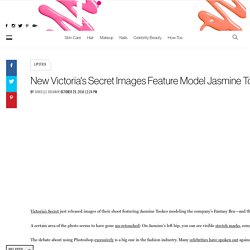 First, there's Tookes herself, who is the first black model to wear the bra in a decade (about time). Secondly, there's the $3 million Fantasy Bra itself. And last, but definitely not least, is what the company—which isn't exactly known for eschewing Photoshop—kept in the images. A certain area of the photo seems to have gone un-retouched: On Jasmine's left hip, you can see visible stretch marks, completely normal things that most women have (an estimated 80 percent of them, in fact).

And it's obvious that she's gorgeous—with or without Photoshop manipulation. The 30-day worm and cricket diet. Image copyright Camren Brantley-Rios A US student has just spent 30 days on a "bug diet" - eating insects three times a day. 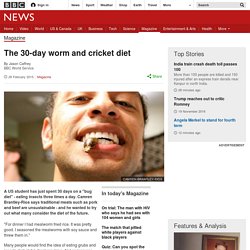 Camren Brantley-Rios says traditional meats such as pork and beef are unsustainable - and he wanted to try out what many consider the diet of the future. "For dinner I had mealworm fried rice. It was pretty good. I seasoned the mealworms with soy sauce and threw them in. " Geordie Shore's Vicky Pattison looks flawless in Instagram snap. 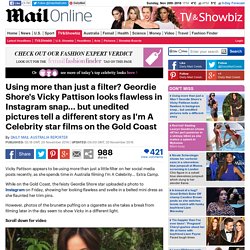 Extra Camp. While on the Gold Coast, the feisty Geordie Shore star uploaded a photo to Instagram on Friday, showing her looking flawless and svelte in a belted mini dress as she flaunted her trim pins. It's as healthy to eat bugs as it is to eat steak, study says. Think nothing can take the place of a juicy, perfectly cooked burger? 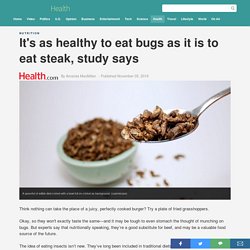 Try a plate of fried grasshoppers. Okay, so they won't exactly taste the same—and it may be tough to even stomach the thought of munching on bugs. But experts say that nutritionally speaking, they’re a good substitute for beef, and may be a valuable food source of the future. Daily chart: Grub's up. Nike is slammed by critics as campaign star Bella Hadid is branded 'abnormally thin' 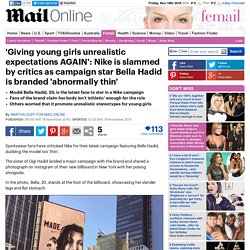 The sister of Gigi Hadid landed a major campaign with the brand and shared a photograph on Instagram of their new billboard in New York with her posing alongside. In the photo, Bella, 20, stands at the foot of the billboard, showcasing her slender legs and flat stomach. Khloe Kardashian sparks concern among fans after super slim Instagram selfie. Tumblr’s Depression Connection – The Ringer. Scrolling through y0ung-blood, a wildly popular Tumblr, eventually you’ll see a picture of a daisy strung along a wall. 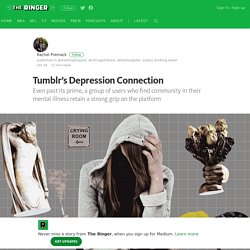 Underneath it, there’s a message. Further down, you’ll see more words overlaid on images. I am my own ghost haunting the memories I love the most Sometimes mornings I wake up and find myself trapped under the weight of everything bad that has ever happened to me. You can help people with mental illness through new Instagram feature - TheCable Lifestyle. Mental illness is often overlooked because we can’t physically see it but it affects millions of people around the world. 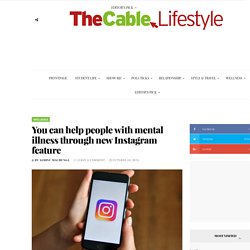 The truth remains that many people face one mental illness or the other and there is no platform or avenue for help. Social media is a place where people come to connect and socialise but at the same time, many fight insecurities, loneliness, inadequacy, and isolation. Instagram teases new feature on mental illness. Depression is a very big problem in todays society. Many people turn to social media to express themselves and their feelings. Instagram wants to take a stand and do something about it. They plan on adding a new feature. “The platform has introduced a new feature which will aim to help users who might be struggling with mental health issues, by allowing people to flag up when they think a fellow IGer needs help.” Miranda Larbi for Metro.co.uk said.

Instagram combats mental illness with new Suicide Prevention Tool. Instagram has created a Suicide Prevention Tool designed to flag posts related to self-harm or suicide. Greg Medina/Asst. Photography Editor. The hot girls of Instagram rising to fame with near-naked posts. This bevy of Instagram beauties might just be the hottest women on social media. Their sexy posts have earned them millions of followers – taking them from unknown to infamous. And their eye-popping video clips might just have something to do with it, earning the incredible women a celeb status most legitimate celebs can only dream of. Supermodels Think Instagram Models Are An Embarrassment.

There seems to be a dust-up between supermodels and current Instagram models that is not going away. In fact, more models in both categories are weighing in. While it seems to be generational and professional, supermodels Alek Wek and Rebecca Romijn are sharing their thoughts that the term “model” means more than uploading images on your phone. Recent supermodel news has not been so flattering, as former supermodel and now mom-of-two male models Stephanie Seymour and her sons have all been arrested over the last year for run-ins with the police, according to the Inquisitr.

Stephanie Seymour was arrested for drunk driving, her son, Peter Brant Jr. was arrested for assaulting a police officer while trying to get on an airplane drunk, and son Harry Brant tried to stiff a cabbie, and ran away from the cab, drunk and high, before being rounded up by police. It’s obviously been tough being a model in the Brant family. The vegan athletes who show you don't need meat to be fit.

Tanned, lean and with more photos of themselves in tiny outfits shared on Instagram than you've had hot dinners, Giacomo Marchese and Dani Taylor are typical champion bodybuilders. They're also dedicated vegans. Shocked? They want you to be. The athletic duo are the founders of Plant Built, a group of vegan fitness fanatics in the US who are dedicated to proving meat doesn't necessarily equal muscle. Marchese and Taylor founded the group in 2012. Raising babies as vegan is not neglect, mothers insist.

The EU fought cosmetic tests on animals, battery hens and elephant poaching gangs. Brexit could end that. Five reasons why you should stop worrying and go vegan. North Pole above freezing in sign of 'sudden' and 'very serious' climate change. Forbes Welcome. Kim Kardashian returns to Instagram after Paris attack by following old pal Paris Hilton. How to make your pet Instagram famous, from Doug the Pug's owner. Instagram sees shopping as the next step in its evolution. Cameroon's government is reacting to online criticism by calling social media "a new form of terrorism" — Quartz. Chinese social media star faked good deeds. The rise and rise of fake news.

Hate crimes, social media, and the rise of the “hoax hoax” NHS England sets up £400k innovation fund for mental health. China to Trump: We didn't invent global warming. Kendall Jenner On Why She Left Instagram And When She Will Return.