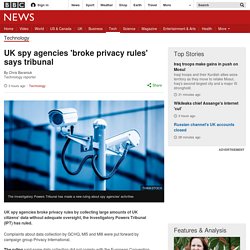 Complaints about data collection by GCHQ, MI5 and MI6 were put forward by campaign group Privacy International. The ruling said some data collection did not comply with the European Convention on Human Rights (ECHR). But it added that proper statutory supervision was put in place last year. It was a "highly significant judgement", Privacy International said. As part of its review of the spy agencies' activities, the IPT examined the organisations' collection of communications data - involving the "who, where, when, how and with whom" was involved in conversations, but not their contents - and personal information about people. 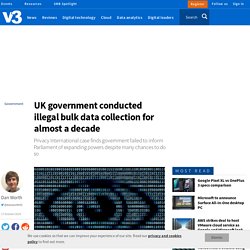 The case was brought by Privacy International and heard in the summer. The IPT said it was clear that the actions of the UK government in collecting bulk communications data (Bulk Communications Data) and personal information datasets (Bulk Personal Datasets) between 1998 and November 2015 were not legal under Article 8 of the European Convention of Human Rights (ECHR). It looks like we can’t show you adverts on this page, which may be caused by ad blocker software on your device. Because we rely on advertising to fund our journalism, please disable any ad blockers from running on V3, then reload the page to see the rest of this content. 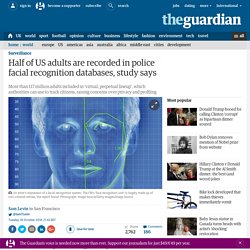 A report from Georgetown Law’s Center on Privacy and Technology found that more than 117 million adults are captured in a “virtual, perpetual lineup”, which means law enforcement offices across the US can scan their photos and use unregulated software to track law-abiding citizens in government datasets. Numerous major police departments have “real-time face recognition” technology that allows surveillance cameras to scan the faces of pedestrians walking down the street, the report found.

In Maryland, police have been using software to identify faces in protest photos and match them to people with warrants, according to the American Civil Liberties Union (ACLU). 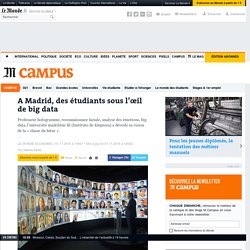 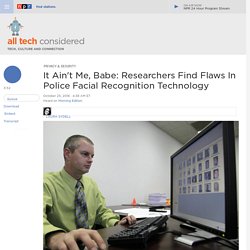 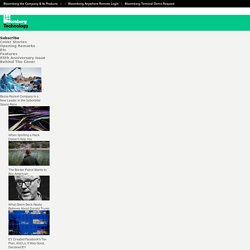 And like mom, it isn’t asking your permission to do what it wants with old photos. While millions of internet users embrace the tagging of family and friends in photos, others worried there’s something devious afoot are trying block Facebook as well as Google from amassing such data. As advances in facial recognition technology give companies the potential to profit from biometric data, privacy advocates see a pattern in how the world’s largest social network and search engine have sold users’ viewing histories for advertising.

The companies insist that gathering data on what you look like isn’t against the law, even without your permission. Facebook declined to comment on its court fight. Creepy or cool? Snap photos of strangers to find them on social media. KK: Do tech companies have a duty to protect people’s identities? 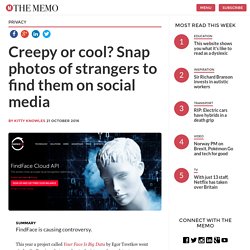 AK: We just launched the cloud face recognition software platform, which is available for every business to plug into and use for their own recognition tasks. But we will thoroughly monitor its usage and ban those organisations and people who try to use it inappropriately. KK: What are good reasons companies might use FindFace? AK: Facial recognition technology can simplify our lives. Feds Walk Into A Building, Demand Everyone's Fingerprints To Open Phones. In what’s believed to be an unprecedented attempt to bypass the security of Apple iPhones, or any smartphone that uses fingerprints to unlock, California’s top cops asked to enter a residence and force anyone inside to use their biometric information to open their mobile devices. 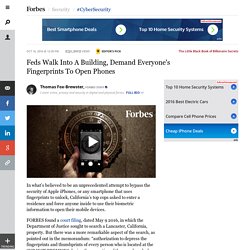 FORBES found a court filing, dated May 9 2016, in which the Department of Justice sought to search a Lancaster, California, property. Facial recognition may be unreliable, and nearly half of US adults are in databases, study finds. Criminal Justice Posted Oct 25, 2016 11:45 am CDT. 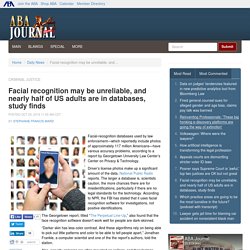 Facial Recognition Threatens Privacy of All Americans » Alex Jones' Infowars: There's a war on for your mind! A coalition of over 50 civil liberties groups sent a letter to the Justice Department’s civil rights division calling for a “safeguards” to ensure that facial recognition software is being used accurately and fairly. 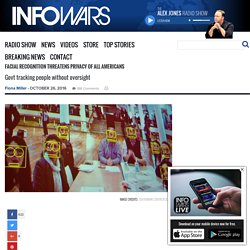 Police departments and other government coalitions have been using facial recognition software more often in recent years. Does Facebook's facial scanning technology violate privacy law? While Facebook's facial recognition technology may be useful for tagging photos, some user believe that it violates their privacy. The gathering of this biometric data is the subject of a lawsuit filed against the social network in May, under a unique Illinois law. The Biometric Information Privacy Act allows for fines of between $1,000 (£818) and $5,000 (£4,092) each time a person's image is used without permission. Facial recognition software 'sounds like science fiction,' but may affect half of Americans - Home. Thursday October 20, 2016 Next time you're walking down a busy sidewalk, look at the person on your left. Then, look at the person on your right. Next, look up at the security camera mounted on the side of a building.

The FBI has collected 430,000 iris scans in a so-called 'pilot program' To create that pool of scans, the FBI has struck information-sharing agreements with other agencies, including US Border Patrol, the Pentagon, and local law enforcement departments. California has been most aggressive about collecting scans, but agencies in Texas and Missouri can also add to and search the system. The result amounts to a new national biometric database that stretches the traditional boundaries of a pilot program, while staying just outside the reach of privacy mandates often required for such data-gathering projects.

"The fact these systems have gone forward without any public debate or oversight that we've been able to find is very troubling," says Nicole Ozer, Technology and Civil Liberties Policy director at the ACLU of California, who likened the project to other programs, such as facial recognition and cell site simulators, that have also been put in place in the state. FBI Facial Recognition Database Innocent People. If you have a driver's license, odds are better than even that your photo is sitting in a police database somewhere. And if you are young, female or black, the facial recognition software that compares your face to a video image may not get a perfect match. Those are two of the surprising findings of a new study this week that found that 117 million Americans — more than half of all adults — have been quietly added to facial recognition databases held by state and local law enforcement agencies.

All drivers in Maryland and Virginia, for example, have been added into a computer. So, too, have residents of San Francisco, Los Angeles and San Diego, Calif. The New York Police Department may soon use these databases to match drivers' licenses to video from close-circuit TV cameras. Checking for identification markers such as fingerprints or DNA against a database of known criminals has been commonplace in police departments.

12 pictures that show the complete absurdity of using age software on refugees. On Wednesday, Microsoft told indy100 that the facial recognition used by the Daily Mail and the Express to allege a refugee was overage was never intended to be used for this purpose. Social media users first noticed the inappropriate use of the software. A spokesperson for the company then told us: How-old.net was designed to be an example of how developers could build a fun app using modern development practices. Researchers create 3D faces from online photos to defeat face authentication systems. Security researchers continue to find ways around biometric-based security features, including a new attack which can defeat face authentication systems.

You might be careful about posting photos of yourself online, either refraining from it or setting the images to private, but your “friends” might post pictures of you online. It wouldn’t matter if those pictures of you are low quality or there were as few as three publicly available photos of you, researchers from the University of North Carolina have developed a virtual reality-based attack that can reproduce your face well enough to trick face authentication systems.