SSW Nov 2019. The Final Stratospheric Warming - the reversal of 10 hPa 60°N zonal-mean winds to their summertime easterly state - will occur by 00Z tonight (29th), 14 days later than average. Theme music. Stratosfäärin polaaripyörre alkaa lopulta heikentyä. Animaatio jaksosta 1.4.-24.4.2020 #otsoni #otsonikato Data: ECMWF… Good wave activity in the Atlantic sector within a 10 day reach. Also well visible as a "dent" in the polar vortex, that could be the final act of the season. @SimonLeeWx… @SimonLeeWx @sosprey Nice! Reminds me of a figure I produced during my PhD showing the stratospheric wave components in my model. I had called it „when the stratosphere smiles back at you“, but I like „sudden stratospheric smiling“ much better! GFS also going for a serious swing to negative thanks to some cyclonic wave breaking, which is interesting.…

Simon Lee sur Twitter : "The #PolarVortex continues to be battered around by wave-1 activity through the next 16 days in the latest GFS forecasts... but the vortex strengthens! Alongside a reduction in eccentricity, a poleward shift, and a [U] wind increa. Severe-weather.EU sur Twitter : "*Stratosphere warming watch UPDATE* A few calculations later, the models are still fixed on the powerful warming phase in early December! Some calculations are now starting to show a major warming event and zonal wind reve. Nice GIF The polar vortex has repaired itself!…

Twitter. @MichaelEMann @BBCWorld Comparing the polar vortexes at the north and south right now is dramatic. shows a clean ring of temperatures around Antarctica, and a +/-50C patch mess around the north pole. #PolarVotex is actually something VERY high up in the Stratosphere, 50km. It can undergo changes &amp; influence the #jetstream below at 7km. It’s then the changing JET STREAM which can cause smaller VORTICES of cold POLAR air to break away &amp; drift so.

Delighted to see my pic featured on @bbcpointswest this evening. Thank you so much @BBCWthrWatchers @bbcweather #weatherwatcherruthiebabes… No 'beast' from Sudden Stratospheric Warming so far this year, but why? - BBC Weather. Here is my "official" 3D animation of this year's stratospheric #PolarVortex split. Another beautiful event!… Simon Lee sur Twitter : "By subtracting the zonal-mean geopotential height, we can get a look at the wave/eddy structure across the mid-latitudes (40-80°N), and then get a sense of how this is coupled (or not) with the stratosphere. #SSW… Dan Holley sur Twitter : "Sadly the western side of the @BBCLookEast region had a 'cut' version of the forecast - but in the East we discussed sudden stratospheric warming and the polar vortex, and why it may contribute (along with other factors) towards. Lots of talk about Sudden Stratospheric Warming at the moment. Does this mean a re-run the winter of 2018? Not necessarily. Louise explains more. LM…

Very cold weather can sometimes arrive in the UK two or three weeks after a 'sudden stratospheric warming' event, so we're keeping a close eye on the latest one. Hear Matt's explanation: □… Sudden Stratospheric Warming underway, mid/late January could see some serious winter weather across a large part of Europe – Severe Weather Europe. What is sudden stratospheric warming? 640x480. It gives me great pleasure to announce... The 10 hPa 60N zonal-mean zonal wind has (finally) become easterly, per the 18Z GFS analysis, indicating a major #SSW is now occurring. □…

What is Sudden Stratospheric Warming? - BBC Weather. The stratosphere forecast has been holding strong #SSW (via Larry Coy)… The Arctic recently sent us a powerful message about climate change. Arctic scientists aren’t usually afraid of a little cold. 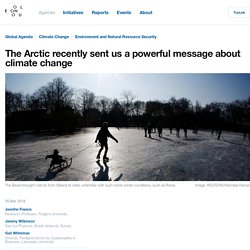 Windy conditions don’t usually get us howling. The beasts we pay attention to are usually polar bears. But last week’s “Beast from the East” triggered a few anxious conversations. Social media memes aside, our problem isn’t this one extreme weather event per se. Our key fear is that the Beast isn’t really from the East – its birthplace was farther north. Compelling scientific evidence suggests that the Beast actually comes from the high Arctic, and it’s not the only weather monster to emerge from that region. As some media reports have identified, alongside the freezing conditions in Europe, we’re simultaneously seeing exceptional warming happening over the Arctic.

Arctic near-surface air temperatures north of 80N. Image: Zack Labe, UC Irvine The Arctic has had warm spells before. The most dramatic changes, though, are with Arctic sea ice – the ice that floats on top of the Arctic Ocean. Image: National Snow and Ice Data Center Share. Polar Vortex Impact on Winter Weather. Judah Cohen sur Twitter : "Astronomical #spring begins this week but are there any signs yet of meteorological spring or will #winter continue to hang on across the hemisphere? Hint I think the answer lies with the behavior of the #polarvortex.

Derek Brockway - weatherman sur Twitter : "The recent unusually cold weather is connected to the Madden-Julian Oscillation. The MJO in active phase 7 in the West Pacific led to Sudden Stratospheric Warming. The Polar Vortex weakened & split. Arctic & Nort. Derek Brockway - weatherman sur Twitter : "Funnily enough I'm reading about this and the connection to the Madden Julian Oscillation which can lead to Sudden Stratospheric Warming. SSW's are often followed by a shift south of the jet stream, a negative No. What's behind the UK's freezing weather? Image copyright PA As the UK and the wider European continent shivers, the Arctic has witnessed some spectacularly high temperatures in recent days, some 30 degrees above average in places. 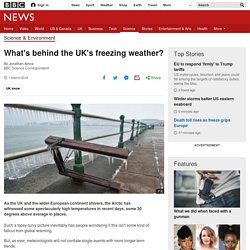 Such a topsy-turvy picture inevitably has people wondering if this isn't some kind of fallout from global warming. But, as ever, meteorologists will not conflate single events with more longer-term trends. The UK Met Office, for example, is adamant that what is occurring now should be regarded as part of the natural ups and downs we get in our weather. Q&A: What does all this snow mean for climate change? Q: Snow in winter. 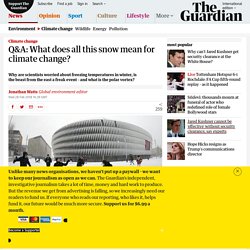 That feels reassuringly normal. Does this mean the climate has fixed itself? Severe-weather.EU sur Twitter : "Meridional (S-N) flow has established over the N-NE Atlantic, pushing warm maritime airmass far into the Arctic region. This is producing temperatures much warmer than average for this period. Map: Earthnull… Zack Labe sur Twitter : "Cape Morris Jesup (#Greenland's northernmost observation station) is now reporting temperatures well above freezing today... +6.1°C at the latest observation! Crazy! Station is provided by @dmidk at https.

Severe-weather.EU sur Twitter : "Temperature anomaly map for the Arctic region for the next 5 days (GFS model): while Europe will be in deep freeze, the Arctic region will be 'scorching hot', with temperatures up to 15-20 °C above long term average (1979- Severe-weather.EU sur Twitter : "850 mb temp across the Arctic region through the next 10 days - looking directly at the north pole, Europe is at ~6h position: the effects of disturbed/collapsed polar vortex are visible as strong outbreaks for Arctic cold. The Beast From The East Cometh - Blog by Nick Finnis. What's behind it turning much colder to end February? 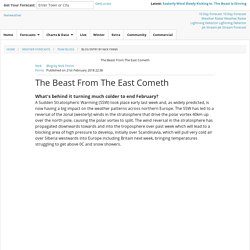 A Sudden Stratospheric Warming (SSW) took place early last week and, as widely predicted, is now having a big impact on the weather patterns across northern Europe. The Polar Vortex, Sudden Stratospheric Warming and the 'Beast from the East' @NickJF75 @Netweather gives a detailed analysis of why it's about to turn much colder. Matt has 5 things you need to know about the cold and snowy weather coming our way... Jo… Here's my quick n' dirty 3D animation of the (currently ongoing) stratospheric #PolarVortex split. It's certainly a beaut!… "GEFS Mean Still going for a Sudden Stratospheric warming in a few days time. This can lead to #cold conditions in some areas of the #globe. Interestingly GFS repeated runs are rising heights in #Europe at the end of its. Derek Brockway "The Polar Vortex has split with Sudden Stratospheric Warming now taking place. The Arctic Oscillation is forecast to go negative with the Madden-Julian Oscillation in phase 7. These factors may lead to blocking and very cold.

Severe-weather.EU sur Twitter : "A powerful upper ridge with extensive surface high pressure system over the Arctics and two deep cold core lows over central Europe and another over the Azores. A reverse pattern which is a direct effect of a Sudden Strato. Cold conditions likely with risk of snow - Met Office. There is increasing confidence that the recent Sudden Stratospheric Warming above the North Pole could lead to prolonged cold conditions over the UK, increasing the risk of easterly wind and significant snow. 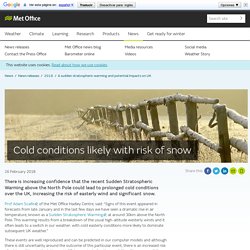 Prof Adam Scaife, of the Met Office Hadley Centre, said: “Signs of this event appeared in forecasts from late January and in the last few days we have seen a dramatic rise in air temperature, known as a Sudden Stratospheric Warming, at around 30km above the North Pole. This warming results from a breakdown of the usual high-altitude westerly winds and it often leads to a switch in our weather: with cold easterly conditions more likely to dominate subsequent UK weather.”

These events are well reproduced and can be predicted in our computer models and although there is still uncertainty around the outcome of this particular event, there is an increased risk of cold conditions in the latter part of February, including the possibility of heavy snowfall. The recent Sudden Stratospheric Warming event above the North Pole could lead to prolonged cold conditions over the UK increasing the risk of easterly winds and snow. "We may have to wait until the very last few days of February or early days of March to experience deep cold and snow. The Polar Vortex Has Split: Here's What That Means For You. A split of the polar vortex occurred this week due to warming in the stratosphere.This is likely to result in cold temperatures in Europe.Although a disruption of the polar vortex is sometimes associated with cold weather in the eastern U.S., that is not always guaranteed. 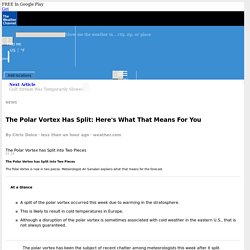 The polar vortex has been the subject of recent chatter among meteorologists this week after it split. In short, there are now two smaller vortices: one over western Canada and another over Europe. Across the Arctic, where the polar vortex typically stays locked, the stratosphere has warmed. This typically kicks into motion a polar vortex disruption like we are seeing.