They are safer and better

History of Vaccines. The story of vaccines did not begin with the first vaccine–Edward Jenner’s use of material from cowpox pustules to provide protection against smallpox. 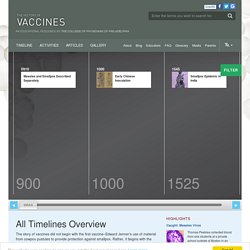 Rather, it begins with the long history of infectious disease in humans, and in particular, with early uses of smallpox material to provide immunity to that disease. Evidence exists that the Chinese employed smallpox inoculation (or variolation, as such use of smallpox material was called) as early as 1000 CE. It was practiced in Africa and Turkey as well, before it spread to Europe and the Americas. Edward Jenner’s innovations, begun with his successful 1796 use of cowpox material to create immunity to smallpox, quickly made the practice widespread. His method underwent medical and technological changes over the next 200 years, and eventually resulted in the eradication of smallpox. Louis Pasteur’s 1885 rabies vaccine was the next to make an impact on human disease. Connecticut Governor Ned Lamont Plans to End Religious Exemption For Vaccinations. Connecticut Gov. 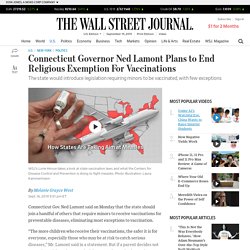 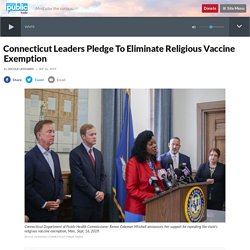 Ned Lamont and other state leaders promised Monday they would back efforts to eliminate the state’s religious exemption for mandatory childhood vaccinations in order to preserve immunization levels and prevent disease outbreaks. “You know, sometimes legislatures like to wait until the emergency and then act,” Lamont said. “And that’s not the way you deal with public safety.” Legislators and state officials have debated amongst themselves for months on the issue as nearby states like New York and Maine passed their own laws getting rid of non-medical exemptions. Meanwhile, parents who oppose mandatory vaccines have vehemently vocalized their disapproval of changes like this.

“I know there are many who sincerely believe that the religious exemption should not be repealed and vaccine rates by schools should not be published,” said DPH Commissioner Renee Coleman-Mitchell said. Coleman-Mitchell recommended that the religious exemption be eliminated by Oct. 1, 2021. Chemical element. Mercury was known in Egypt and also probably in the East as early as 1500 bce. 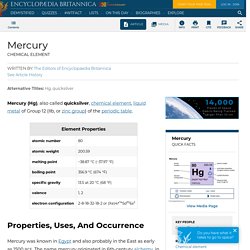 The name mercury originated in 6th-century alchemy, in which the symbol of the planet was used to represent the metal; the chemical symbol Hg derives from the Latin hydrargyrum, “liquid silver.” Although its toxicity was recognized at an early date, its main application was for medical purposes. Mercury is the only elemental metal that is liquid at room temperature. (Cesium melts at about 28.5 °C [83 °F], gallium at about 30 °C [86 °F], and rubidium at about 39 °C [102 °F].) Mercury is silvery white, slowly tarnishes in moist air, and freezes into a soft solid like tin or lead at −38.87 °C (−37.97 °F).

It alloys with copper, tin, and zinc to form amalgams, or liquid alloys. Get unlimited ad-free access to all Britannica’s trusted content. The good electrical conductivity of mercury makes it exceptionally useful in sealed electrical switches and relays. Filipino parents urged to immunise children amid measles outbreak, SE Asia News. MANILA (DPA) - Filipino parents were urged on Saturday (Feb 9) to immunise their children against measles amid an outbreak that has killed more than 20 children in the Philippines since the start of the year. 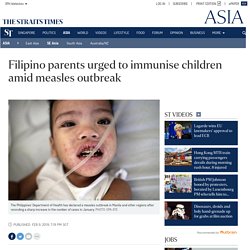 Julia Rees, of Unicef Philippines, said routine immunisation coverage in the country was only at 55 per cent, despite the fact that the measles vaccine was available for free in government facilities. "The measles vaccine is safe and effective, and had been successfully used in the Philippines for more than 40 years," she said. I Have Autism and I'm Offended by the Anti-Vax Movement. My name is Max and I have Autism Spectrum Disorder (ASD), but that's not my secret. 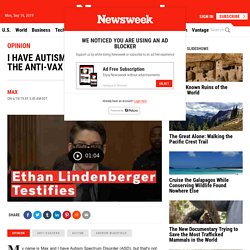 What you'd never guess unless you sat down to talk to me is that the anti-vaccine movement drives me crazy. A large portion of the ASD community is angered that anti-vaxxers are reducing our lives and experiences to something that should be feared and avoided. We are hurt by the prejudice of anti-vax parents who publicly declare they would prefer potentially deadly diseases for their children over ASD. That's an insult to the ASD community, and it works against our attempts to be accepted as a diverse and meaningful part of any community on our own terms.

And then, of course, there are the facts. There is no proven link between vaccines and ASD. Vaccines.gov.