Yoga – Benefits Beyond the Mat. Yoga, an ancient practice and meditation, has become increasingly popular in today's busy society. 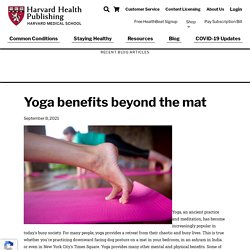 For many people, yoga provides a retreat from their chaotic and busy lives. This is true whether you're practicing downward facing dog posture on a mat in your bedroom, in an ashram in India or even in New York City's Times Square. Yoga provides many other mental and physical benefits. Some of these extend to the kitchen table. Types of yoga There are many types of yoga. The goal during yoga practice is to challenge yourself physically, but not to feel overwhelmed. A better body image Yoga develops inner awareness. Yoga studios typically don't have mirrors. Becoming a mindful eater. Why Your Brain Needs Exercise. In the 1990s researchers announced a series of discoveries that would upend a bedrock tenet of neuroscience. 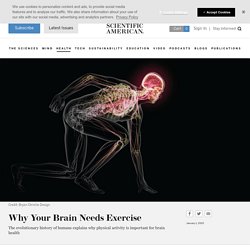 For decades the mature brain was understood to be incapable of growing new neurons. Once an individual reached adulthood, the thinking went, the brain began losing neurons rather than gaining them. But evidence was building that the adult brain could, in fact, generate new neurons. In one particularly striking experiment with mice, scientists found that simply running on a wheel led to the birth of new neurons in the hippocampus, a brain structure that is associated with memory. Since then, other studies have established that exercise also has positive effects on the brains of humans, especially as we age, and that it may even help reduce the risk of Alzheimer’s disease and other neurodegenerative conditions. The runner who makes elaborate artwork with his feet and a map. Crafting a running route is a delicate process, especially in a city like San Francisco: you’ve got to find somewhere safe and scenic, avoid the crowds and decide how many hills you want to conquer. 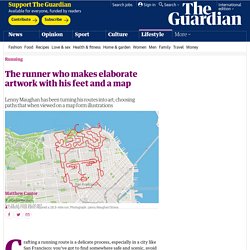 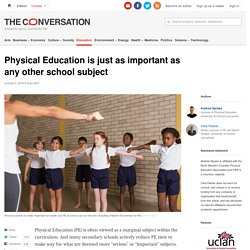 And many secondary schools actively reduce PE time to make way for what are deemed more “serious” or “important” subjects. Research from the Youth Sport Trust shows that 38% of English secondary schools have cut timetabled PE for 14- to 16-year-olds. One of the main reasons for this is the increased pressure to produce exam results. New guidelines set daily activity minimums for young kids, including ’tummy t... TORONTO – New guidelines set the minimum amount of activity that toddlers, preschoolers and even babies should get each day. 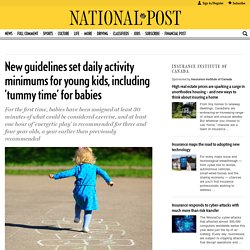 The new report was developed by experts including the Canadian Society for Exercise Physiology; obesity specialists at Ottawa’s Children’s Hospital of Eastern Ontario; and the non-profit group ParticipAction. The “24-Hour Movement Guidelines for the Early Years” suggests kids aged one to four should get at least three hours of physical activity spread throughout the day. That includes at least one hour of “energetic play” for three- and four-year-olds – something that previously wasn’t recommended until age five. Suggestions include running, dancing, or playing outside. Eurobarometer 472. Why do left-handers excel at certain elite sports but not others? From cricketer Wasim Akram to baseball pitcher Clayton Kershaw and table tennis star Ding Ning, the world of sport has no shortage of left-handed players. 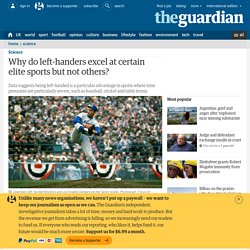 But now researchers say they’ve worked out why lefties are overrepresented in some elite sports but not others. Runners and musicians have better-connected brains than the rest of us. Why Kids Shouldn t Specialize in One Sport. "It [specialization] is one of the worst developments imaginable at the youth sports level. 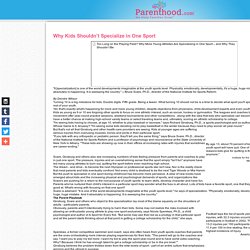 Physically, emotionally, developmentally, it's a huge, huge mistake. And it absolutely is happening. It is sweeping the country. " -- Bruce Svare, Ph.D., director of the National Institute for Sports Reform By Deirdre Wilson Turning 10 is a big milestone for kids. Physical Activity in Schools is Essential to Reversing Childhood Obesity  For those working to reverse the trend in childhood obesity, there is significant cause for excitement. 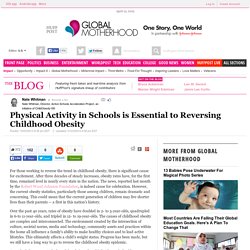 After three decades of steady increases, obesity rates have, for the first time, remained level in nearly every state in the nation. The news, reported last month by the Robert Wood Johnson Foundation, is indeed cause for celebration. However, the current obesity statistics, particularly those among children, remain dramatic and concerning. This could mean that the current generation of children may live shorter lives than their parents -- a first in this nation's history. Over the past 40 years, rates of obesity have doubled in 2- to 5-year-olds, quadrupled in 6-to 11-year-olds, and tripled in 12- to 19-year-olds. As we look for reasons to be hopeful and signs that this battle can indeed be won, we see creativity and innovation fueling a growing grassroots movement that is focused on increasing quality physical activity for our kids.

A Surprising Nutrient That Helps Kids Sleep. Sleeplessness among children is common, occurring in as many as 40% of kids. 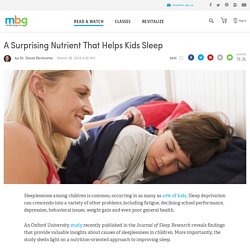 Sleep deprivation can crescendo into a variety of other problems, including fatigue, declining school performance, depression, behavioral issues, weight gain and even poor general health. An Oxford University study recently published in the Journal of Sleep Research reveals findings that provide valuable insights about causes of sleeplessness in children. More importantly, the study sheds light on a nutrition-oriented approach to improving sleep. The researchers evaluated the sleep patterns of 395 children aged 7 to 9. In addition, they performed a blood analysis on these children to measure their levels of DHA, an omega-3 fatty acid. As had been reported in earlier studies, the number of children having trouble with sleep is a significant 30 to 40%. The study revealed that children who received the DHA showed not only better quality sleep, but significantly fewer and shorter night-wakings.

Understanding Stress: Symptoms, Signs, Causes, and Effects. What is stress? 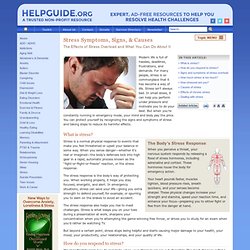 The Body’s Stress Response When you perceive a threat, your nervous system responds by releasing a flood of stress hormones, including adrenaline and cortisol. These hormones rouse the body for emergency action. Your heart pounds faster, muscles tighten, blood pressure rises, breath quickens, and your senses become sharper. These physical changes increase your strength and stamina, speed your reaction time, and enhance your focus—preparing you to either fight or flee from the danger at hand. Study: 19-year-olds in U.S. as sedentary as 60-year-olds. By Barbara Benham /Published Jun 15 A new study from the Johns Hopkins University Bloomberg School of Public Health suggests that physical activity among kids and teenagers is lower than previously thought, and that young adults over the age of 20 show the only increases in activity over the lifespan—after the age of 35, the study found, activity levels declined through midlife and older adulthood.

The surprising findings, published online in the journal Preventive Medicine, used activity trackers to examine the movements of more than 12,000 study participants throughout the day. Understanding the patterns of when people are active and sedentary could help health providers design programs to increase physical activity by targeting not only age groups but times with the least activity, such as during the morning for children and adolescents, the researchers say. The study confirmed concerns about the current obesity epidemic: exercise recommendations were not being met.