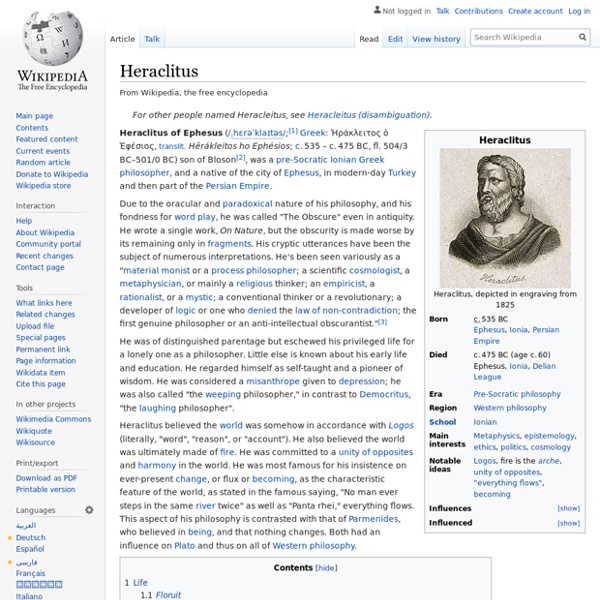 Pre-Socratic Greek philosopher Due to the oracular and paradoxical nature of his philosophy, and his fondness for word play, he was called "The Obscure" even in antiquity. He wrote a single work, On Nature, but the obscurity is made worse by its remaining only in fragments. His cryptic utterances have been the subject of numerous interpretations. He's been seen variously as a "material monist or a process philosopher; a scientific cosmologist, a metaphysician, or mainly a religious thinker; an empiricist, a rationalist, or a mystic; a conventional thinker or a revolutionary; a developer of logic or one who denied the law of non-contradiction; the first genuine philosopher or an anti-intellectual obscurantist. Life[edit] Floruit[edit] Heraclitus disliked Pythagoras. The dates for Heraclitus are uncertain. Diogenes Laërtius[edit] Ephesus on the coast of Asia Minor, birthplace of Heraclitus Ephesus[edit] Childhood[edit] Misanthropy[edit] "Most men are bad" - Bias of Priene Dropsy and death[edit] G.

Royal Society national academy of science in the United Kingdom The Royal Society, formally The Royal Society of London for Improving Natural Knowledge,[1] is a learned society and the United Kingdom's national academy of sciences. Founded on 28 November 1660, it was granted a royal charter by King Charles II as "The Royal Society".[1] It is the oldest national scientific institution in the world.[2] The society fulfils a number of roles: promoting science and its benefits, recognising excellence in science, supporting outstanding science, providing scientific advice for policy, fostering international and global co-operation, education and public engagement. It also performs these roles for the smaller countries of the Commonwealth. The society is governed by its Council, which is chaired by the Society's President, according to a set of statutes and standing orders.

Gulliver's Travels 1726 novel by Jonathan Swift Gulliver's Travels, or Travels into Several Remote Nations of the World. In Four Parts. By Lemuel Gulliver, First a Surgeon, and then a Captain of Several Ships is a prose satire[1][2] of 1726 by the Irish writer and clergyman Jonathan Swift, satirising both human nature and the "travellers' tales" literary subgenre. It is Swift's best known full-length work, and a classic of English literature.

Thomas Aquinas Thomas Aquinas (; Italian: Tommaso d'Aquino, lit. 'Thomas of Aquino'; 1225 – 7 March 1274) was an Italian[10][11] Dominican friar, philosopher, Catholic priest, and Doctor of the Church. An immensely influential philosopher, theologian, and jurist in the tradition of scholasticism, he is also known within the latter as the Doctor Angelicus and the Doctor Communis.[12] The name Aquinas identifies his ancestral origins in the county of Aquino in present-day Lazio, Italy. He was the foremost classical proponent of natural theology and the father of Thomism; of which he argued that reason is found in God. His influence on Western thought is considerable, and much of modern philosophy developed or opposed his ideas, particularly in the areas of ethics, natural law, metaphysics, and political theory. Thomas Aquinas is considered one of the Catholic Church's greatest theologians and philosophers.

Jacob Klein From Wikipedia, the free encyclopedia Jump to navigationJump to search Hans Jonas German philosopher of environmentalism and Gnosticism Hans Jonas (; German: [ˈjoːnas]; 10 May 1903 – 5 February 1993) was a German-born American Jewish philosopher, from 1955 to 1976 the Alvin Johnson Professor of Philosophy at the New School for Social Research in New York City. Biography[edit] Birth house of Hans Jonas in Mönchengladbach. In front of the house, two Stolpersteine were installed in 2008. Process philosophy Process philosophy (or ontology of becoming) identifies metaphysical reality with change and development. Since the time of Plato and Aristotle, philosophers have posited true reality as "timeless", based on permanent substances, while processes are denied or subordinated to timeless substances. If Socrates changes, becoming sick, Socrates is still the same (the substance of Socrates being the same), and change (his sickness) only glides over his substance: change is accidental, whereas the substance is essential. Therefore, classic ontology denies any full reality to change, which is conceived as only accidental and not essential.

Alfred North Whitehead English mathematician and philosopher Alfred North Whitehead OM FRS FBA (15 February 1861 – 30 December 1947) was an English mathematician and philosopher. He is best known as the defining figure of the philosophical school known as process philosophy,[21] which today has found application to a wide variety of disciplines, including ecology, theology, education, physics, biology, economics, and psychology, among other areas. In his early career Whitehead wrote primarily on mathematics, logic, and physics. His most notable work in these fields is the three-volume Principia Mathematica (1910–1913), which he wrote with former student Bertrand Russell. Principia Mathematica is considered one of the twentieth century's most important works in mathematical logic, and placed 23rd in a list of the top 100 English-language nonfiction books of the twentieth century by Modern Library.[22]